“The budget of many prospective buyers was dealt an abrupt hit”

How will home sales be impacted by the toxic combination of sky-high home prices that even on a national basis exceed the crazy levels of the prior bubble, and mortgage rates that have soared nearly a full percentage point since late October, to nearly 4.4%?

That’s what everyone wants to know. The industry was hoping that soaring rates would trigger panic buying to lock in current rates before they go even higher. But the opposite seems to be happening.

It takes months between looking at a home and closing the sale. The home sales data reported so far covered home sales that had been negotiated before the rates jumped. But more immediate data, such as home viewings, writing offers, and pending home sales, do not look promising.

The National Association of Realtors today released its Pending Home Sales Index for November. It dropped to 107.3 (seasonally adjusted annual rate), the lowest since January. It’s down 0.4% from November a year ago.

The index, considered a leading indicator for existing home sales, tracks the number of contracts that have been signed. From that point on, it usually takes one or two months before the sale closes and gets reported as a “sale.” So this is not exactly a bright spot for home sales going into 2017.

“The budget of many prospective buyers last month was dealt an abrupt hit by the quick ascension of rates immediately after the election,” explained NAR chief economist Lawrence Yun. “Already faced with climbing home prices and minimal listings in the affordable price range, fewer home shoppers in most of the country were successfully able to sign a contract.”

Similarly, the Redfin Housing Demand Index for November, which is based on Redfin customers requesting home tours and writing offers, dropped 7.3% from October, to a seasonally-adjusted level of 94, the lowest November in the data series going back to January 2013.

Compared to October, on a seasonally-adjusted bases, 7.6% fewer potential buyers requested tours, and 8% fewer wrote offers. While that doesn’t represent a “plunge off the chart,” it doesn’t speak of enthusiasm either: 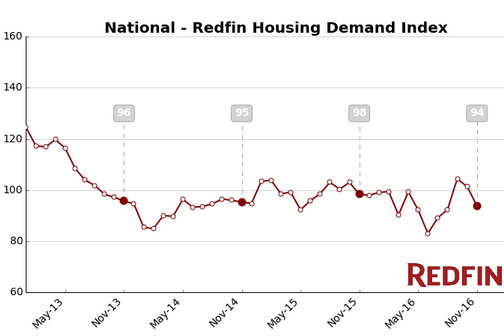 The number of homes on the market in November dropped 10% year-over-year. Redfin chief economist Nela Richardson explained, “Nationally, new listings were at a standstill, as sellers paused to assess market timing.”

But the Housing Demand Index varied widely from market to market.

For the Los Angeles area, the index plunged 26 points in November from a year ago, to 83. It had been lousy for much of the year. On a monthly basis, touring homes was down 12.8% and offers plummeted 25.5%. Redfin real estate agent Alec Traub:

“Rising rates are putting off some buyers in Los Angeles, as is the uncertainty of a new presidential administration. But the real kicker is the fact that prices here are at or, in some instances, above 2007 peak levels, so you have a lot of buyers concerned about a potential bubble. These folks are taking more a wait-and-see approach, rather than jumping in.”

At the other end of the spectrum is Oakland. The index soared to 125 in November, up from 99 in October, and up from 91 last November. On a monthly basis, home tour requests jumped 12.5% and offers soared 62.7%. Redfin real estate agent Dylan Masella:

“Now that rates are finally rising, some buyers feel that if they do not buy now, they will not be able to afford a home in the East Bay as prices continue to rise. What was supposed to be a slow autumn has turned into a market full of unprecedented activity.”

But Oakland is special. It attracts housing and office cost refugees from San Francisco just across the Bay. That has had an impact: According to Zillow, the median home value has skyrocketed 117% since early 2012, from $300,000 to $650,000. But it remains far below San Francisco’s $1.132 million. A similar situation is playing out in commercial real estate.

So people and companies are moving across the Bay, not only from San Francisco, but also from hot-spots in Silicon Valley, to escape these crazy prices. The biggest company so far to make the trip is Uber. It acquired the iconic 1929 Sears building in Oakland and filed an $8-million building permit to renovate it. Uber plans to move its corporate headquarters into it. About 2,000 to 3,000 people will occupy the 380,000 square feet.

Of note: Uber’s footprint might not be getting much smaller in San Francisco. It’s developing a 423,000-square-foot campus in the city’s Mission Bay area for about 3,000 to 4,000 employees. Uber currently occupies about 500,000 square feet in downtown San Francisco.

It boils down to this: National averages paper over vast differences between local markets that have their own unique dynamics.

And a mortgage rate of 4.4% is still very low, by historical standards.