There’s only one thing that has pumped up this market.

Stock indices are frolicking in record territory. The S&P 500 is up almost 11% this year, though the gains came after the election. The Dow has been titillating the entire world, day after day, with the prospect of finally, finally hitting 20,000 after being just a hair shy of it for two weeks. So it would seem that the IPO market would be hot. But for IPOs, 2016 has turned out to be a fabulously terrible year.

That makes two years in a row. Last year at this time, I wrote that the IPO market in 2015 had been the worst since the Financial Crisis. I quoted Sam Kendall, UBS global head of equity capital markets:

“We all thought that we might finally get a year where we would be able to put four quarters together,” he said at the time. “If you looked at the pipeline and how people were thinking about the world, it just felt good. And then the wheels came off.” 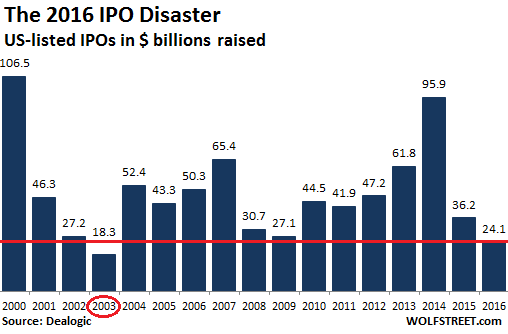 Last Friday, Trivago, a hotel search platform, went public at an IPO price of $11 a share, below the expected price range of $13 to $15 a share. There’s little appetite among institutional investors for IPOs. Despite the lowered IPO price, shares closed at $11.81 today, down 2.8%. It was most likely the last IPO of this year.

In terms of performance, IPOs that made it over the last two years haven’t done that badly – just worse than the overall market. The Renaissance Capital IPO index, which tracks IPOs for their first two years of trading (so companies that went public in 2015 and 2016) is down a smidgen year-to-date, despite all the recent stock-market hoopla.

No one likes to take big risks with young companies that often have no earnings, and sometimes no revenues, unless the market will reward them with big-fat gains, pronto.

Here are some salient facts about what will go down as IPO-disaster-year 2016, according to Dealogic:

In December 2015, I figured that 2016 could not possibly be worse. But it was. So no I’ll bravely figure that 2017 cannot possibly be worse than 2016. I mean, one biggie like Snap, the owner of Snapchat, which is rumored to be preparing for an IPO, or a few decent-size IPOs would seriously move the needle of money raised.

That doesn’t mean that investors who buy the shares won’t take a big bath. That’s the fear, in this climate.

But the official backlog is not promising: there are 24 filings in the 180-day IPO backlog, for a meager $2.4 billion in expected value, according to Dealogic. The largest one: $500 million, for the Brazilian meat processing company, JBS Foods.

And they better hurry up while the Trump euphoria lasts.

Numerous explanations are being circulated why this IPO disaster has happened two years in a row. Volatility in the stock market is one of them. But other than in the beginning of the year, there wasn’t much volatility, with stocks recovering nicely from a deep swoon in early 2016, returning to record territory until after the election, when they soared to even bigger records. So it’s hard to blame “volatility.”

And there is plenty of risk appetite in the market. Every bit of trash has been bid up. Junk bonds have surged. Money is flowing into the riskiest corners.

It didn’t help at all that one of those shining stars, valued at $9 billion, Theranos, went down in flames, fraud allegations, and lawsuits and took its $750 million in equity funding with it. Investors don’t like those stories.

Plus, there a number of large companies that PE firms have bought out during the LBO craze and that they’re trying to exit via an IPO. Albertsons, which also owns Safeway, comes to mind. It has scrapped its IPO in 2015 but in October amended its filing. So maybe 2017 will be the year. The PE firms behind the deal must have a buoyant market to pull this off because over-indebted brick-and-mortar retailers have a tough business model.

And there’s another issue. Much of the power behind the surge of the stock market has come from share buybacks: over the past 12 months, S&P 500 companies spent $557 billion on purchasing their own shares. A huge amount of new money piling into the market. It’s what propped up these lofty share prices for so long.

But these companies are buying their own shares and driving up the value of their own shares. They’re doing nothing for IPOs. Boosting a market with pandemic buybacks doesn’t create the blind exuberance and hope that a large number of big IPOs could feed off. Instead it creates a structurally unsound and overvalued market, ripe for big nasty surprises. And the IPO community sees that too.

But is that buyback boom now going down the drain, putting this wondrous stock market at risk? Read…  What the Heck’s Happening to Our Share Buyback Boom?