In turn, households get the feel-good illusion.

Despite all the frothy excitement about the stock market’s new highs, and the drooling today over the new highs reached by Housing Bubble 2, exceeding the prior crazy highs of Housing Bubble 1 even according to the Case-Shiller Index, and despite eight years of super-low interest rates, and a million other things that are hyped constantly, median household incomes, the crux of the real economy, is still a dreary affair.

It has fallen 0.5% since January. That’s not a propitious trend. The report put it this way: “Median annual household income in 2016 has not been able to maintain the momentum that it achieved during 2015.” 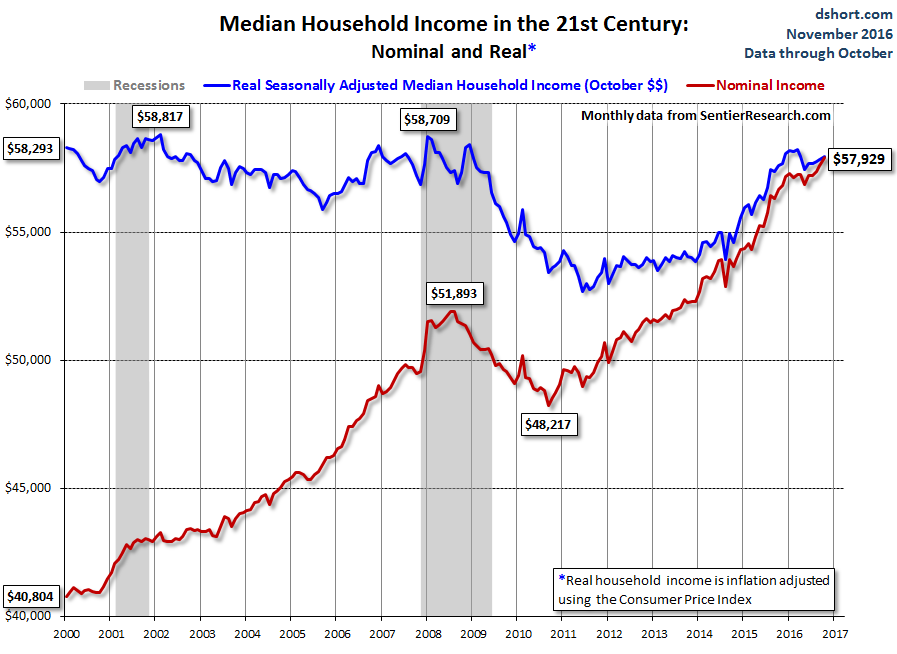 And inflation is now rising. The Fed is turning victory laps. Inflation is in part responsible for the decline in real median household income since January. Inflation matters. The report:

We continue to monitor the course of inflation, as this has a significant effect on the trend in real median annual household income.

In addition: Even minuscule but consistent understatement of CPI in relationship to actual price changes as experienced by the median household wreaks havoc on their inflation-adjusted income. Since 2000, official inflation has amounted to 42%. If CPI is understated by just a fraction every year, multiplied by 16 years, it would knock several percentage points off real median household income.

This translates into reduced purchasing power, which is exactly what many people have been experiencing.

This whole affair – the devious impact of inflation on household income – becomes even clearer in this chart by Doug Short at Advisor Perspectives. It shows the percent change over time, starting in 2000: The beautifully soaring illusion of nominal income (red line), and the dreary reality of wage stagnation or worse, after inflation (blue line): 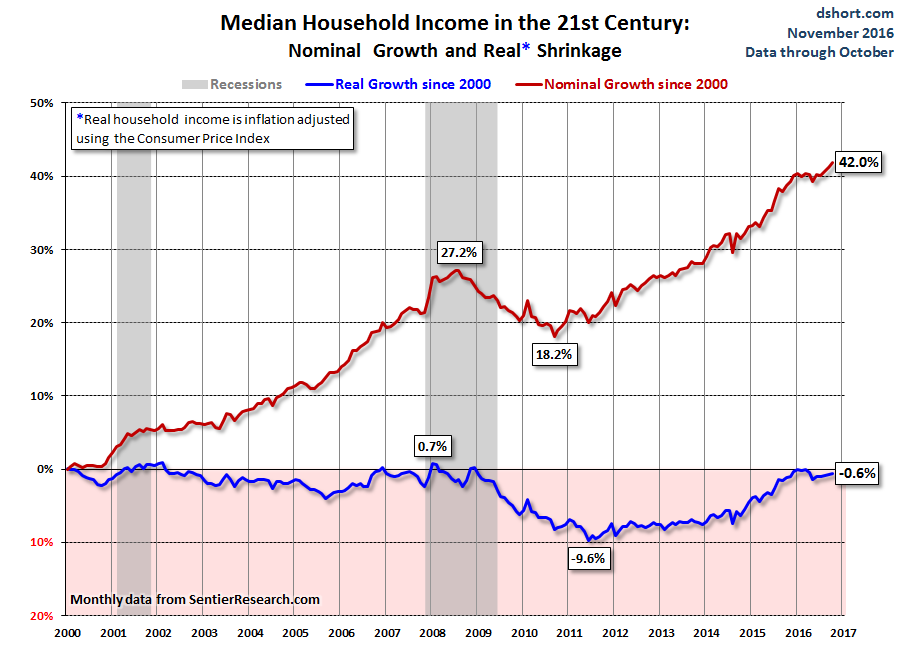 For the Fed, “price stability” means ingeniously 2% inflation, based not even on CPI but on the core personal consumption expenditures price index (PCE), which mostly trends lower than CPI and thus shows even less inflation than CPI. And the Fed keeps hoping that people are fooled by this idea that they’re making more money when in fact, inflation is eating up the gains, plus some.

So for the first 16 years of this millennium, real median household income (as adjusted by CPI) has been mired down at a lower level than at the end of the last millennium, and remains 0.6% below it. While the nominal income – the feel-good one that the Fed wants the people to believe in – has soared 42%.

Wages not keeping up with inflation is the easiest way to cut the cost of labor. And companies don’t catch the blame; they can give raises to make people feel appreciated. In turn, they raise their prices and thus increase their revenues and profits, while strangling the purchasing power of these people.

OK, I get it: Every company clamors for cheap labor to maximize its profits. But in the end, an economy that is based on consumer spending has trouble growing if the purchasing power of these consumers is sinking into an endless inflation-induced wage-quagmire.

So yes, the holes left behind by declining purchasing power can be filled by taking on debt – and that too is the Fed’s preferred method: to push consumers to make up for the loss in purchasing power with additional debt that they then can never get out of.

In this manner, Canada, not the US, has been bravely leading the way, as household debt has skyrocketed. Now the OECD is fretting about Canada’s housing bubble and household debt because you can take this only so far. Read…  What Happens “If the Boom Ends with a Bang?”

89 comments for “OK, I get it: Companies Clamor for Cheap Labor, Fed Delivers”