No major consumer confidence measure has been more relentlessly negative since the Financial Crisis than Gallup’s weekly Economic Confidence Index. It has become notorious for its gloomy depiction of Americans’ feelings about the economy. It was in positive territory only twice: in January 2008, when the index commenced as it was plunging, and in the weeks of December 2014 and January 2015, which Gallup ascribed to the drop in gasoline prices. The rest of the nine years of its existence, the index has been negative.

But in the three survey weeks since the November 8 election, everything changed. And today, the index hit record highs.

Even Americans’ views of current economic conditions jumped from dismal to record highs, though the vast US economy could hardly have changed in those three weeks. Not even the government has changed. That’s the Trump effect.

Today’s Economic Confidence Index for the week ending November 27 rose to +6, the highest since the survey began in January 2008, and up from -11 before the election. I circled the 17-point spike in Gallup’s chart: 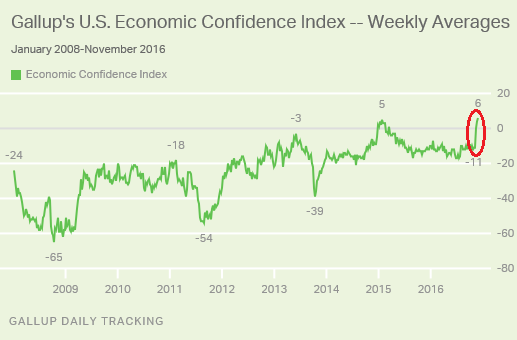 Current conditions: with only 22% of Americans considering the economy “poor,” the current conditions index rose to a record +8, up from +6 last week and from 0 the week before the election.

Economic outlook: 49% of Americans said economic conditions are “getting better” and 45% said they’re “getting worse.” As a result, the index rose to +4, up from +1 last week, from -5 the prior week, and from -21 before the election. A phenomenal three-week 25-point spike. I circled the Trump-Effect: 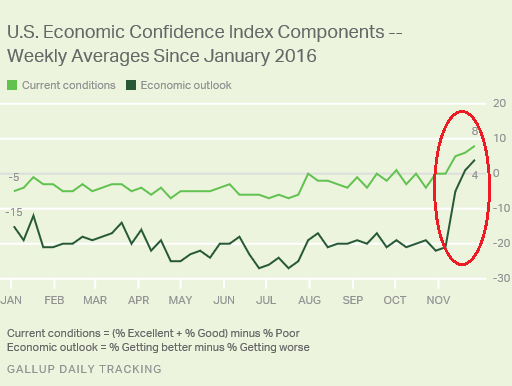 It’s not just Americans who have felt more economically exuberant since the election – US markets have skyrocketed, with the Dow closing above 19,000 this week for the first time in its 120-year history.

This assessment is particularly intriguing since Trump lambasted the Fed-fueled “fake” stock market rally throughout the campaign and proclaimed over and over again that the economy was in “terrible shape.” Many Americans obviously believed it. And now this sudden switcheroo?

Amid all this infectious enthusiasm, Gallup adds a word of caution: “It’s too early to tell whether this uptick in Americans’ positivity will last as Trump’s term begins in January.”

On the other hand (sort of)…

The monthly Conference Board Consumer Confidence Survey has been depicting Americans’ feelings about the economy in a substantially more upbeat manner than Gallup’s measure. Since late 2014, it has ventured frequently above 100 (1985 = 100). Today, the first post-election release, it rose 6.3 points to 107.1, the highest since the glory days before the Financial Crisis.

The Present Situation Index jumped 7.2 points to 130.3. This means that Americans think the economy, the way it is today, is outright hot! The Expectations Index rose 5.7 points to a more lukewarm 91.7.

But the Conference Board throws doubts on the “Trump Effect”: The majority of the consumers in the survey responded before the election, it says, and “it appears from the small sample of post-election responses that consumers’ optimism was not impacted by the outcome.”

What, no “Trump Effect?”

We’re intrigued. Gallup’s weekly and notoriously negative Economic Confidence Index spiked into positive territory since Election Day specifically on the Trump Effect, but the Conference Board is denying any Trump Effect and just pegs the bump in its much more positive index on “a more favorable assessment of current conditions coupled with a more optimistic short-term outlook” specifically unrelated to any Trump Effect.

The fact remains, for many folks, this economy as it pertains to their own lives is a toxic mix of low wages and rising prices. They’re among those that Trump had electrified during the campaign, and they’re feeling better. But for the beneficiaries of the Fed’s policies, the economy has been a rollicking party with huge payoffs for years. And they don’t see anything in a Trump administration that would diminish that in any way. On the contrary.

Then there’s reality, which is what people actually do. And in terms of spending money – that all-important measure of the economy – well, at the kickoff of this holiday spending season, it’s back to Retail Quagmire, with a good dose of gloom for brick-and-mortar stores. Read…  Black-Friday-Weekend Woes End “Trump Effect”

102 comments for “Sudden, Infectious Enthusiasm for “Current Economic Conditions” after Trump Called them “Terrible” for Months?”