Who are the top 10 donor families? “Familiar names…”

For the most cynical among us, democracy in the US is just a codified peaceful way of swapping out the figureheads at the top. For the less cynical, there is a lot more at stake, and they’re willing to plow huge amounts of money into these elections so that this money will help them accomplish their goals afterwards.

Putting money to work in politics is easy in the US. It’s considered a legitimate investment with some sort of return. You have to be really careless, totally uninformed, and completely devoid of common sense to commit illegal acts of corruption because there are a million ways to do this legally. And the amounts changing hands are enormous.

Nearly $6.6 billion: that’s how much candidates, parties, and outside groups are raising and spending in trying to move things their way in the 2016 election cycle, the Center for Responsive Politics estimates on its website, OpenSecrets.org. It’s a new record. It’s up by $86.5 million, adjusted for inflation, from the 2012 presidential cycle, which had also been a record.

Alas, it’s not over, and the Federal Elections Commission (FEC) hasn’t reported all the data yet, and some money doesn’t get reported at all. We’ll get to that in a moment. Hence the report: “The cost could be much higher – this is a conservative estimate.”

The good thing is that this spending adds to GDP and to a lot of corporate bottom lines via ad sales, loads of traffic, fees, and so on. Google, CNN, Fox News, other cable channels, ad agencies, companies printing fliers in China, consulting firms, law firms, and many others are laughing all the way to the bank. It’s sort of an electoral stimulus program funded largely by deep and not so deep pockets. But that’s about the only good thing.

The biggest increases in money flows, compared to 2012, came from outside money groups “that purportedly work independently from candidates,” the report said. They’ve greased this election with $1.3 billion so far (through October 24), $190 million more than at this point in 2012, accounting for 26.8% of total spending, up from 24% at the same point in 2012. Of that moolah, 56% came from Republican groups and 37% from Democratic groups.

And it’s getting more concentrated: “The top 100 families” contributed $654 million to candidates, political parties, and outside groups so far, or 11.9% of the total raised, up from 5.6% in the 2012 election cycle (blue if focused on Democratic groups, red if focused on Republican groups, table by CRP). “Their names are familiar….” 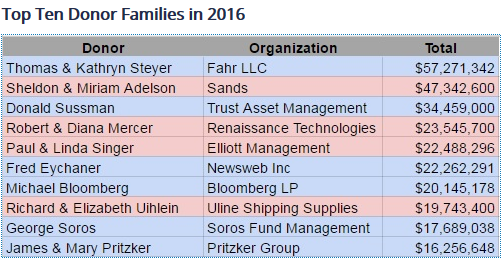 
According to CRP, this election cycle “has brought many record-breaking moments when it comes to financing,” including these:

Trump’s historic lows: The Donald was lax in filling his campaign coffers, not sending a fundraising email until mid-June 2016. In fact, he has brought in the smallest sum of any general election candidate since 2000 (when federal matching funds were still a thing) at $169.5 million as of Sept. 30. The real estate magnate also has injected his campaign with $56 million (about half of the $100 million he repeatedly vowed he’d supply); that makes up more than a quarter of the campaign’s funds.

Clinton, in comparison, has brought in $445.4 million so far.

The Bush money train: Jeb Bush and his supporting super PAC, Right to Rise USA, showed that money isn’t everything. The group raised $121 million and held the record in amount spent by a presidential super PAC, long after Bush’s departure from the race in February.

Then there was “the rise of the small donor.” Bernie Sanders set a new record in percentage terms, at 59% of his total contributions, beating Obama’s percentage record, but not his dollar record. The $134.6 million that small donors contributed to Bernie’s campaign is about 50% higher than Clinton’s small donor contributions and over double that of Trump’s. But Bernie was just doing it in the primaries. No one knows how much he could have collected from small donors had he made it into the final race.

“While this campaign saw the rise of the small donor and a fall in spending reported by groups that hide their donors, overall, important trends hold true: More money is still coming from a tiny set of elite donors. It’s going to super PACs that are scarcely independent of the campaigns they support. And it’s targeting competitive races where the vote will be closest and the opportunity to have an impact, greatest.”

The report also noted that Trump’s unpopularity “among establishment Republicans in particular” has caused “major players like the establishment-linked Crossroads network and Koch-backed nonprofits like Americans for Prosperity and Freedom Partners to spend their money elsewhere, particularly in tight Senate races.”

Spending in Senate races, as disclosed to the FEC, has surged by $137 million from 2012 at this point!

And much of this activity in down-ballot races was never logged with the FEC because it was framed as “issue” advocacy outside the time periods when such advocacy has to be reported.

This tactic of stealth political advertising has become the hallmark of nonprofit groups that want to spend tens of millions of dollars in elections without reporting that to the IRS. By January 2016, dark money groups had already spent more than $30 million on election-related activity, and less than a third was reported to the FEC.

Groups like the Crossroads-linked One Nation on the right and Majority Forward on the left would go on to spend tens of millions, regularly avoiding filing reports with the election agency. One Nation alone has spent about $30 million in 2016, but has reported less than $3 million of that to the FEC. The trick of timing its ads before the agency’s reporting window opened on Sept. 9 could allow it to claim that its unreported spending was “educational” when it files its tax returns in November 2017.

All in all, this unreported spending probably adds between $50 to $75 million, possibly more, to the total amount of dark money spending that has been reported.

And what do we get for all these enormous and wondrous efforts and these piles of money? The best politicians money can buy.

Whoever wins this money game won’t be able to bask in the warm glory of the rosy economic scenario, however. Read…  What’s Really Different this Time: Business Investment Drops to Lowest September since 2010