The smart money tries to cash out at the peak, no?

Does it always start at the top? Because there’s just no letup in dismal tidbits piling up about big-city high-end condo market: Manhattan, San Francisco, Miami – and now Chicago too?

Just last year, things were still so good on the Magnificent Mile, those tony 13 blocks of Michigan Avenue from the Chicago River north to Oak Street, of landmark towers, shops and restaurants – rents rank among the most expensive in the country – museums, hotels, and high-end condos.

April last year, the 65th-floor penthouse at the Park Tower on 800 N. Michigan Ave sold for $18.75 million, “to a firm with ties to ‘Star Wars’ creator George Lucas and wife Mellody Hobson, president of a Chicago investment firm,” the Chicago Tribune speculated. It was an all-time record. The real estate business was ecstatic.

Now another penthouse at the Park Tower – a 4,000 sq. ft. two-bedroom – is for sale, asking $12 million, according to the Financial Times. A $7.5 million four-bedroom three-bathroom condo is for sale at the Art Deco Palmolive Building at the north end of the Mag Mile. Other lesser condos are for sale galore in the area.

And new supply is coming on the market. While much of the Magnificent Mile has landmark status and is off limits to developers, more than 500 high end condos are under development nearby, including the $1-billion, 93-story Vista Tower, with about 400 condos and 200 hotel rooms – according to the FT, “a joint venture between Chinese developer Dalian Wanda and Chicago’s Magellan Development.”

Sellers have come out of the woodwork in droves just when buyers are beginning to have second thoughts.

Home sales in the area have fallen by about half so far this year compared to the same period last year, Christine Lutz, a real-estate agent at Kinzie Brokerage, told the FT.

“The slowdown would be even more pronounced when you consider the large numbers of homeowners who listed homes but then yanked them off the market when they were unable to sell,” she explained.

And homes are sitting on the market longer, before getting sold – those that do get sold and not pulled off the market unsold. Homes priced above $1 million spent an average of 155 days on the market before they sold, according to real estate firm Re/Max, cited by the FT. That’s up from 118 days last year.


But wait … the overall market in Chicago is still holding up, according to Zillow. The median home value in Chicago, at $214,400, is up 2.7% over the past year. The Zillow Home Value Index sits at $221,000 and still seems to be moving in the right direction (chart by Zillow): 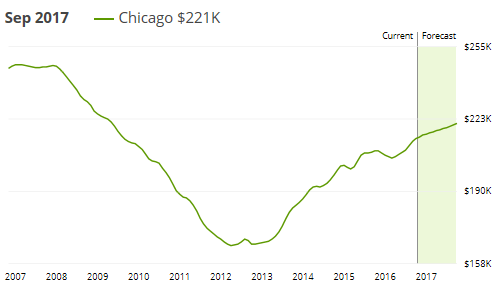 The high end had done particularly well. The FT:

Furthermore, agents report that since 2012, until the recent downturn, it had been affluent areas such as the Magnificent Mile, the Gold Coast, and Lincoln Park, which had seen the strongest price increases.

But this direction appears to have changed. Hard data is, so to speak, hard to come by on this kind of stratification. According to the FT, citing data from Zillow: during the 12 months through March 31, prices at the top 10% of the market have plunged 16.6%.

In fact, local agents suggest the recent slowdown at the upper end of the market is a result of overzealous sellers attempting to cash in on a strong market.

“Rising prices encouraged people to put more homes on the market,” Bernadette Kettwig of Related Realty told the FT. “Now, the inventory in the $2-million and above segment of the market in places like the Magnificent Mile is exceeding demand and driving prices down.”

In other words? The smart money is trying to cash out at the peak, no?

They all know that real estate is only liquid on the way up. Once the market turns and prices head south, liquidity evaporates into the ambient air without a trace. It only reappears after prices have dropped low enough to lure buyers from the woodwork. And these buyers too often operate on false hopes, just slowing down the fall before it continues, until prices are truly compelling again. But by then, there may not be a lot of liquidity left anywhere.

Vancouver’s housing market is in turmoil, Toronto’s is spiking. So what the heck is going on? Read…  There’s No Plateau in a Housing Bubble, Not Even in Canada

35 comments for “Is Chicago’s Housing Market Next?”