This has never happened before, ever.

As a consequence of a dizzying buying frenzy in September, the average price of new homes in China soared 11.2% from a year ago, after a 9.2% jump in August, the National Bureau of Statistics reported today. It was the 12th month in a row of year-over-year gains, and the largest increase on record.

The average price of new homes rose in 63 of the 70 cities in the index. It dropped in six cities and remained flat in one. But all heck broke lose in tier-one cities: In Beijing, the average price skyrocketed 27.8%, in Shanghai 32.7%.

This comes after authorities have unleashed a tsunami of liquidity that triggered a record borrowing binge. In response to the prior deflation of China’s house price bubble, and the social unrest it began to entail as folks saw their life savings evaporate, the People’s Bank of China cut interest rates six times in the eleven months leading up to October 2015. The benchmark mortgage rate dropped to a historic low of 4.9%. Last month, the medium- and long-term loans to households, mostly mortgages, ballooned by 571 billion yuan, as the total value of new homes sold (a function of price and volume), according to Bloomberg calculations, soared 61% year-over-year, nearly double the increase in August.

The chart by Trading Economics shows September’s record surge. Note the 6.1% decline in March 2015, the sharpest decline on record – hence the panic at the time among Chinese authorities to stop the collapse and reflate the bubble: 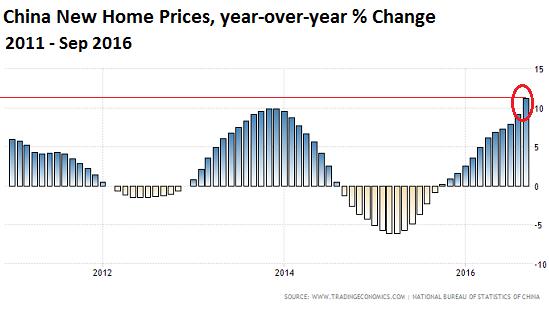 But for months, local and national officials have fretted about the resurgence of the housing bubble. It is debt-fed, and thus highly risky. Once prices turn south, the shrapnel would not only hit the banking sector but the real economy. Given the large proportion of Chinese savings tied up in housing, the people aren’t going to be amused either.

So in trying to put a lid on the bubble, at least 21 cities have imposed property curbs, including larger down-payment requirements. In Beijing, for example, the government ratcheted up the size of the minimum down payment for first-time buyers to 35%, the highest among tier-1 cities. Some also imposed limits on purchasing multiple units, a popular form of speculation, like buying stocks in the US.

Most of these new limits took effect in the first week of October. And this likely triggered the last-minute buying frenzy in September, ahead of the restrictions.

To show that the new curbs are having an effect in tamping down on the housing bubble, the freaked-out government did something it had never done before: with the whole-month data for September, the National Bureau of Statistics also released preliminary data for October. And prices are suddenly plunging.

For example, the average new-home price in Shanghai dropped 2.5% in just those days since the end of September, and in Beijing 3.7%! If this rate of decline were to continue for a few months or longer, it would cause all kinds of fireworks.

The National Bureau of Statistics commented that the market “apparently cooled” in reaction to curbs implemented in some cities.

But how much of this is just short-term showmanship as the government tries to manipulate the price into what it thinks is the survivable level – whatever that may be, but high enough as to not crush the property sector, one of the last remaining growth engines of the Chinese economy.

Doubts are already cropping up, given the liquidity sloshing through the economy.

“The curbs will show their effect in the initial two-to-three months, but in the longer term idle capital will still likely flow to property in the largest hubs as ‘safe-haven’ assets,” Xia Dan, a Shanghai-based analyst at the Bank of Communications, told Bloomberg. The impact of the restrictions will abate as “liquidity is so abundant in a credit binge,” she said.

These curbs bite temporarily until people figure out how to get around them. And that won’t take long.

What would really deflate the current house price bubble in China and bring it back to earth? Draining the liquidity from the system.

But that would be a shock to the economy already over-burdened by debt – an unknown portion of which is bad debt on the banks’ books, by some estimates up to 20%! Trying to crack down on credit expansion – the fuel that the economy lives on – would likely produce some very ugly results. For policy makers, there is no longer a good way out. Market forces certainly won’t be allowed to clean up this mess. The thing to do is to kick this can down the road as far as possible.