Production lower than 2 years ago, with ugly capacity utilization.

The first time the industrial production index had reached this level was in March 2007! 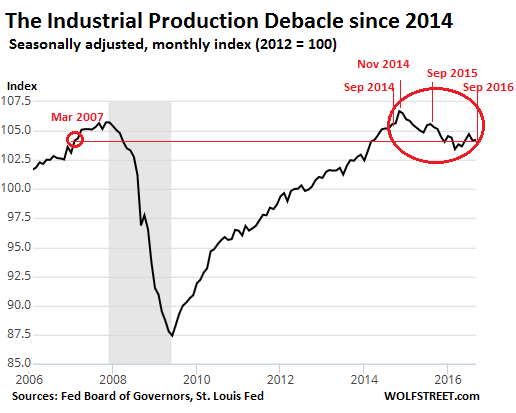 Of the major market groups:

Of the sub-groups, only a few of the big ones made it into positive territory.

And this is interesting going forward: automakers are still cranking out vehicles as if the sales boom were still continuing. But new vehicle sales actually fell in September year-over-year and are nearly flat for the first nine months. Inventories are piling up on dealer lots. So automakers are dousing the market with costly incentives to move the iron. Something has to give: either a miraculous jump in sales or a cut in production.


The energy component of consumer goods (power, home heating, etc.), which accounts for 3.4% of total industrial production, inched up 0.8% year-over-year.

Over the decades, major declines in industrial production, such as we have seen since November 2014, have always been associated with recessions. Hence our “Recession Watch” chart of industrial production, with all major declines circled in red, going back to the 1950s. Every single one of these declines has been associated with a recession (shaded area), except for the current one – and that may be because we’re still in the early phases of these dynamics: 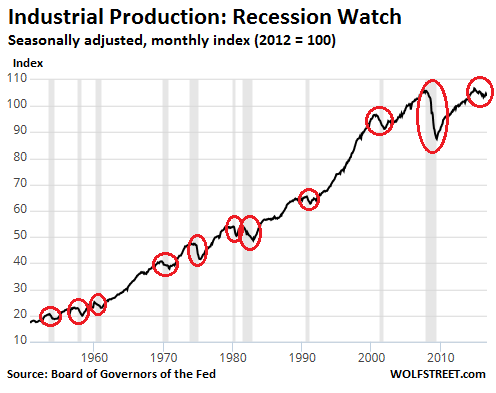 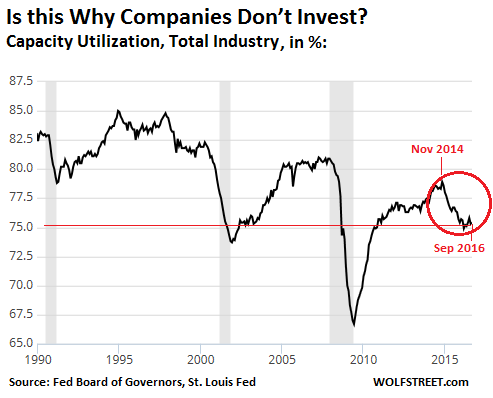 And this miserable capacity utilization explains in part why business investment is so low: Utilization isn’t maxed out, not anywhere near, with some sectors suffering from overcapacity.

These companies are facing stagnant or declining demand for their products. And even though money is dirt cheap and credit plentiful for larger enterprises, and even though they have levered up and borrowed and stuffed their balance sheets up to the gills with record amounts of debt, they have little incentive to invest in productive activities because they don’t see enough demand for their products.

So they do other things with this borrowed money, such as buying back their own shares and buying out each other. Lack of demand in the real economy, despite – or we might be tempted to say because of – years of central-bank free money policies, is tough for individual businesses to overcome.

And the one sector included in industrial production that has been truly booming and setting record after record amid a gold-rush-like mentality? Read… Layoffs Hit Craft Brewer, as Big Beer, Big Money, Overcapacity Rattle American Craft Beer Market

55 comments for “Is this Why US Industrial Companies Don’t Invest?”