World trade in merchandise is a reflection of the global goods-producing economy. And it just can’t catch a break.

The CPB Netherlands Bureau for Economic Policy Analysis, a division of the Ministry of Economic Affairs, just released the preliminary data of its Merchandise World Trade Monitor for July. The index fell 1.1% from June to 113.4, the lowest since May 2015 – a level it had first reached on the way up it in September 2014.

The chart shows that merchandise world trade isn’t falling off a cliff, as it had done during the financial crisis, when global supply chains suddenly froze up. But it’s on a slow volatile grind lower. And compared to the fanciful growth after the Financial Crisis, it looks outright dismal: 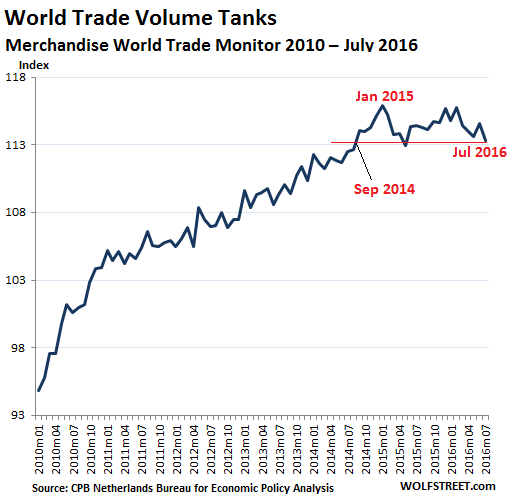 This time – after the big adjustment in values months ago – we have another statistical note. In this data release, the CPB shifted the base year of the series from 2005 to 2010, so the values of the entire index shifted down. Hopefully, the change made the series more representative of reality – because getting a good grip on reality these days is really hard, when entire data systems are carefully designed to conceal more than they reveal (such as the official inflation data).

The decline in trade was sharper in the emerging economies than the advanced economies. That makes sense: The US, on whose demand the health of the entire world economy seems to depend, experienced falling imports in July, according to the data.

Data point after data point document that the goods-based economy in the US is in trouble – manufacturing, wholesale, retail… nothing is firing on all or even most cylinders.

But the service-based economy is not doing all that badly. Its biggest sector – and the biggest sector overall in the US – healthcare, is doing quite well, actually.

Among the health-care companies in the S&P 500, revenues rose 5.2% in the second quarter, year over year, when revenues for all S&P 500 companies fell 3.1%. Revenues rose not because people are getting more health care; they rose because health care has been getting more expensive at a breath-taking pace for many years as the industry has been consolidating into oligopolies and as outrageous prices increases on pharmaceutical products regularly grace the headlines. These price increases work their way into higher insurance premiums – to the point where the sector, at nearly 18% of GDP, is now bleeding the rest of the economy.

For many consumers, there is simply not be a whole lot of money left to buy the things – the gadgets, food, apparel, or doodads – that make up demand for the goods producing sector.

In the US, on whose demand the rest of the world depends, the scenario for the goods-based economy is not rosy. And it shows up in freight volume. “Overall shipment volumes (and pricing) are persistently weak, with increased levels of volatility as all levels of the supply chain (manufacturing, wholesale, retail) continue to try and work down inventory levels.” Read… Recession Watch: US Freight Drops to Worst Level since 2010, “Excess of Capacity” Crushes Rates