“It will be hard to find investors that are willing to go long.”

“The worst is over.” That has been the meme in the oil business in the second quarter. Folks in Houston’s and Calgary’s office sector, companies that supply the oil patch, and everyone else associated with the industry, including hundreds of thousands of employees, are counting on it. But markets are deteriorating at breath-taking speed, with the recovery hype leeching out of it, in face of the enormous obstacles of oversupply and flagging demand.

In the US, the bloodletting continues. Today, Standard & Poor’s reported that another four US companies that it rates defaulted on their debt payments last week – including two oil and gas companies, Atlas Resource Partners and Forbes Energy services. It brought the total defaults on debt rated by S&P to 71 so far this year, over twice the 34 defaults at the same time last year. The default rate in the oil & gas sector has spiked to higher levels than even during the Financial Crisis, while it has been ticking up at a more leisurely pace in other sectors.

And the layoffs continue.

ConocoPhillips, still desperately trying to whittle down costs, announced Thursday that it would slash another 1,000 jobs in 2016, many of them in Texas and up to 300 in Calgary. That’s on top of the 3,400 jobs it has already cut since September 2014. In total, announced layoffs now amount to about a quarter of its former workforce.

Schlumberger, the world’s largest oil field services company, reported a quarterly net loss of $2.16 billion last week, and said it laid off another 8,000 people in the quarter, bringing the first-half total to 16,000 and this oil-bust total to about 50,000. Nevertheless, the-worst-is-over meme continues, according to CEO Paal Kibsgaard:

“In the second quarter market conditions worsened further in most parts of our global operations, but in spite of the continuing headwinds we now appear to have reached the bottom of the cycle.”

Yet Barclays came out with a report on Monday lamenting that global demand for oil in the third quarter was growing at less than a third of the rate than during the third quarter last year, as Reuters put it, “weighed down by anemic economic growth.” The report blamed developed countries along with slowing growth in China and India.

Morgan Stanley pointed to the supply glut of refined products, including gasoline in the US, along with falling demand for transportation fuels. So, “As a result, crude oil demand from refineries is underperforming product demand by a wide margin.”


Last week, the EIA reported that US gasoline stocks had increased again, and are at the highest level for this time of the year in its data series going back to 1990. Even driving season hasn’t been able to trim down the stockpiles nearly enough, and driving season ends with Labor Day: 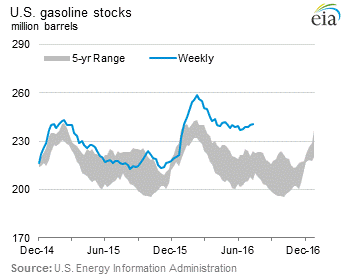 “The global crude-oil glut seems to have turned into a product glut,” Tamas Varga, an analyst at PVM Oil Associates in London, observed in a report.

Refiners – with shutdowns due to scheduled maintenance already looming this fall – are going to react to what is a global gasoline glut by pulling the rug out from under crude oil demand. So….

“It will be hard to find investors that are willing to go long,” Michael Cohen, an analyst at Barclays in New York, told Bloomberg.

And supply isn’t backing off. In June, OPEC raised production to 32.9 million barrels a day, according to Bloomberg estimates. Russia is set to raise production by 590,000 barrels a day over the next three years, according to Goldman Sachs last week. In the US, the weekly rig count has been increasing since May as drillers are getting active again.

Then there’s the fracklog. As of April, there were 4,230 drilled but uncompleted wells (DUCs) in the US shale patch, according to Bloomberg Intelligence. Completing these wells would be the cheapest and fastest way to unleash another tsunami of production.

And markets smell a rat.

“People are looking ahead to the fall and are worried,” Michael Lynch, president of Strategic Energy & Economic Research, told Bloomberg. “There’s more and more talk of prices going south of $40 and as a result people are going short.”

And they did go short. Bloomberg:

Money managers added the most bets in a year on falling West Texas Intermediate crude prices during the week ended July 19, according to Commodity Futures Trading Commission data. That pulled their net-long position to the lowest since March.

In other markets, net-bullish bets on Nymex gasoline dropped 18% to 1,020 contracts, the lowest since November.

Data from the InterContinental Exchange on Monday showed investors cut their net long positions in Brent for a sixth consecutive week by 5,763 contracts to 297,608 contracts in the week to July 19, their lowest since Feb. 22.

The oil bust has been mauling other sectors of the economy, particularly in Houston and Calgary, the two epicenters of the oil bust in North America. Both cities are now under intense pressure. Commercial real estate in Calgary is collapsing [read… How the Oil Bust is Crushing a Downtown of Office Towers]. And Houston experienced a nasty quarter. Read… It Starts: First Mega-Foreclosure Hits Houston Office Market