The foundations have crumbled. All bets are off.

Over the last 20 years, margin debt – when investors buy stocks with borrowed money – went through three multi-year run-ups, each topped off with a spike, followed by a reversal and decline: during the final throes of the bubbles in 2000 and 2007, each followed by an epic stock market crash – and now.

That pattern of jointly soaring and then declining margin debt and stocks even occurred during the run-up and near-20% swoon in 2011.

The grand cycle began in February 2009, at the trough of the Financial Crisis, when margin debt had dropped to $200 billion. It was followed by a multi-year record-breaking run-up, topped off with a spike that culminated in an all-time peak of $507.2 billion in April 2015. Then margin debt reversed and began to decline. On cue, the stock market began to decline a month later. Margin debt zigzagged lower, and stocks did too. But in February this year, stocks suddenly bounced off sharply – without margin debt.

The New York Stock Exchange reported on Monday that margin debt declined again in June, by $3.7 billion to $447.3 billion, just a hair above where it had been in February. 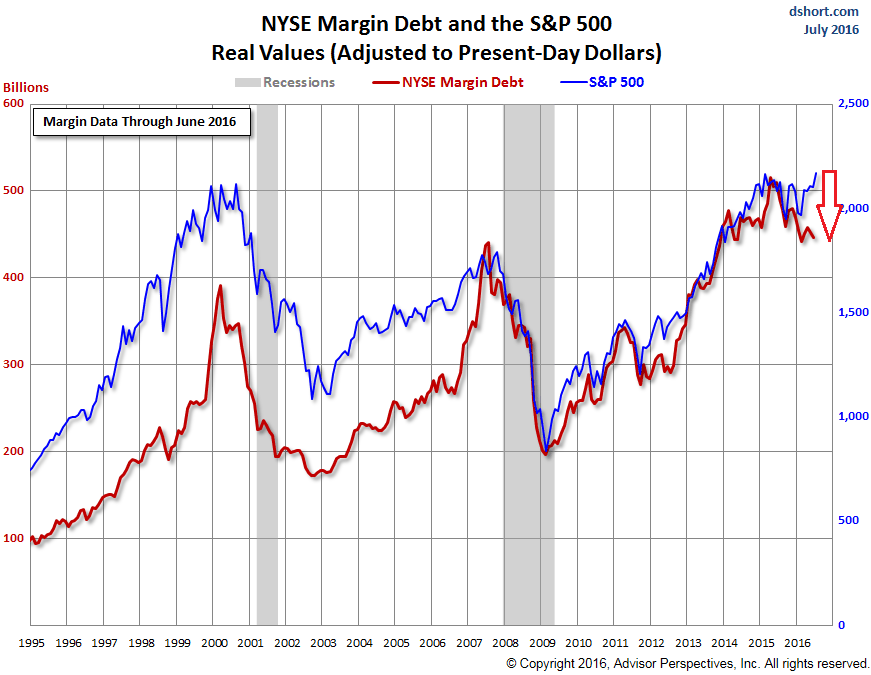 There’s a reason for this relationship. Margin debt is the great accelerator for stock prices, on the way up and on the way down. When investors buy stocks with money they don’t have and that the broker creates for them, it drives up stock prices, and these higher prices allow investors to borrow more money against the same number of shares, which drives up share prices further. Leverage is a wonderful mechanism to create demand.


But when stocks tank, spooked investors begin selling stocks and pay down their margin debt. They’re deleveraging, taking risk off the table. If stocks fall sharply, investors may be forced to sell – or the broker will do it for them at the worst possible time – to pay down their margin debt to stay within the margin limits. Forced selling drives down prices further, which begets more forced selling. And prices spiral lower.

As the chart shows, margin debt has a nerve-racking habit of peaking right around the time stocks begin to crash. In March 2000, margin debt hit a record of $278.5 billion (actual, not adjusted for inflation), just as stocks had begun to crash. A few years later, with the crash having faded from memory, margin debt spiked again, peaked at $381.4 billion (actual, not adjusted for inflation) in July 2007, and fell off. A few months later, stocks sold off. That sell-off eventually turned into a blistering rout.

Here are the margin debt cycles not adjusted for inflation: 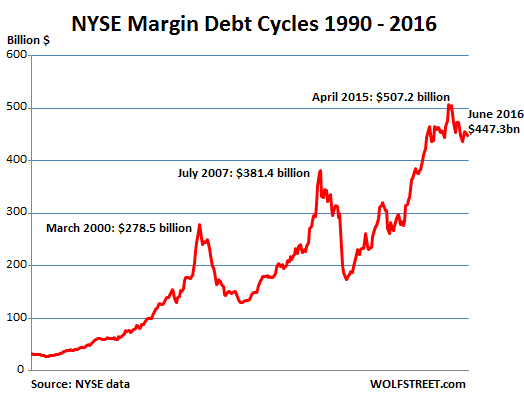 Compared to the size of the economy, the margin-debt peak in April 2015 was bigger than the prior two peaks: 2.8% of GDP versus 2.6% in 2007 and 2.7% in 2000. Each of those prior peaks in margin debt was followed by a collapse in margin debt, and a spectacular crash in stocks. But this time, it’s different.

That divergence fits the pattern in this crazy era of central-bank market management. Seven-plus years of “whatever-it-takes” central-bank-created global liquidity, QE, and interest rate repression to zero, and below zero, have changed the assumptions and dynamics of everything. NIRP refugees – investors fleeing relentless negative interest rate policies and financial repression in their bailiwicks such as Europe or Japan – are spreading the effects of their central bank policies around the globe. And capital flight from some countries, such as China, adds to the impact.

That this time it’s different also shows up in other assumptions and dynamics: business sales have been declining since mid-2014. Earnings have been declining for about that long. Even “adjusted” ex-bad items earnings of the S&P 500 companies have booked four quarters in a row of declines. The S&P 500 aggregate price-earnings ratio, based on GAAP, has soared to over 25, a dizzying number that sets off all kinds of alarm bells.

And yet, the global flood of liquidity keeps pouring into this market, and fundamentals no longer matter, sales and earnings no longer matter, risks no longer matter, and money is free, or nearly free, for institutional investors. But the foundations have crumbled. And all bets are off. That’s what this divergence of margin debt and stock prices tells us. It’s a very precarious position to be in.

Record moneys suddenly pile even into the material that debt crises are made of. Read… Why this Spike Will Perforate Yield Chasers

38 comments for “Stocks Were Already Crashing the Last Two Times this Happened. So What Gives?”