A nasty quarter at the epicenter of the Great American Oil Bust.

Greenspoint Place, a 1.5-million-square-foot, six-building office and retail complex on 36 acres, whose occupancy plunged below 40% when Exxon Mobil moved to its new campus, was sold at a foreclosure auction on July 5. It crowned a nasty quarter in Houston’s oil-bust office market.

The complex was owned by a partnership of two giants: one of the world’s largest developers, Hines, and the General Motors Pension Fund. They’d acquired it in the 1990s. In July 2012, they’d refinanced the first mortgage of $145 million with Northwestern Mutual.

Letting the lender deal with the problems was the logical solution. In early June, Hines told the Houston Business Journal in an email:

“Considering the average occupancy rate in this depressed submarket is only about 50%, due largely to the fact the energy market is hurting, ownership of the asset will be turned over to the lender. We believe that is the best course of action for the property at this juncture.” 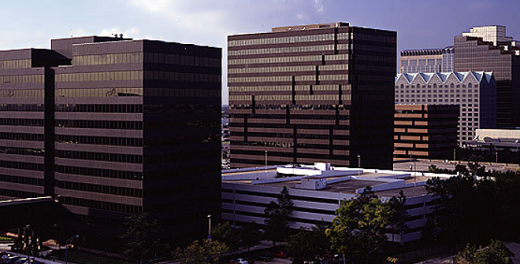 Hines, with $89 billion of assets under management, could have easily kept the property, losing money as it went. But it chose not to. With its excellent insider knowledge of the market, it decided that this wasn’t a temporary real estate downturn, but that it was hopeless in the longer term and that it was better to bail out now. Let the lender take the losses.

During the foreclosure auction, Northwestern Mutual Life submitted the “highest and best bid” of $77.5 million and ended up with the property, which it will try to market and lease.

But finding tenants will be tough. The entire office market of the North Belt/Greenspoint area, with 11.3 million square feet (msf) of space, got hit hard by Exxon’s departure, which vacated 2 msf at the worst possible time. Commercial real estate services firm Savills Studley just reported that the availability rate in the area hit a catastrophic 51% in Q2, the highest of any area in Houston. In Class A properties, it soared to 66%.

Following on the heels of North Belt/Greenpoint is the Katy Freeway sub-market where availability jumped to 37% overall, and to 41% in Class A buildings.

Hope? In Q2, there has been a “surprising jump,” as Savills put it, in activity: 2.9 msf were leased, up 75% from the frozen level in Q1. That’s still 18% below long-term trend of 3.3 msf, and “does not yet represent a reversal from the trend.” Over the last four quarters, 8.5 msf were leased, 36% below the 10-year average, and the lowest four-quarter volume on record.

And much of this deal volume is companies vacating one office and moving into another, which doesn’t help the overall market that much.

Plus, it wasn’t oil companies that suddenly decided to take on new space. Of the ten largest deals, nine were by non-energy companies accounting for 96% of the volume on a square-foot basis.

The largest deal: American Bureau of Shipping leased the entire CityPlace 2 tower with 326,800 sf, which will break ground next year. So this doesn’t help the current market either. In fact, the office space it will vacate is in, you guessed it, the Greenspoint area.

The sole energy company among the top ten is Patterson-UTI Drilling. It will move into 34,748 sf at the vacant and immensely desperate Remington Square III Tower, built last year. It will move out of its space in, you guessed it, the Greenspoint area.

Companies are downsizing and trying to shed office space they leased years ago during the boom when they believed the industry hype that there would be an office shortage, but never occupied this space. This hogging of unused office space in itself creates demand and pushes up prices and fosters the illusion of a sustainable office boom – and a shortage. But now this empty space is hitting the sublease market overnight.

And “see-through buildings” – a term coined during the 1980s oil bust for shells of buildings whose floors weren’t built out – are showing up again on the sublease market.

Just in June, ConocoPhillips put the entire 597,000-sf EnergyCenter Four tower on the sublease market. It was completed last year, has never been used, and remains an empty shell. “See-through” because you can see through the building whose floors haven’t been built out.

Shell, BP, BHP Billiton, and Noble Drilling also have at least 300,000 sf of office space each on the sublease market, waiting for a tenant.

They’re responsible for this sublease space until lease expiration. Then it becomes the landlord’s headache. By 2018, about 30% of these leases will have expired, and by 2019, 48%. As the costs shift from tenants to landlords, they might decide that this is hopeless, as Hines had done. Landlords might then shuffle a big part of the loss to the lender.

Sublease space in Greater Houston has soared to 11.7 msf, according to JLL’s Houston team. Every month on average, 580,000 sf of subleases are coming on the market. In June alone, a stunning 2.14 msf! In two years, sublease space has nearly tripled! This chart shows what the quarterly sublease fiasco looks like: 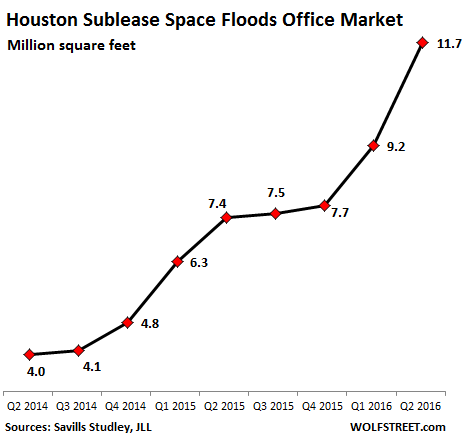 And according to JLL Houston, very little has been absorbed. Year-to-date, only 802,500 sf of it was leased in 140 deals with a “tiny” average of 5,732 sf. Just small companies looking for opportunities.

So what about asking rents? They dropped only 1.2% in the quarter to $29.40 in the Greater Houston market. But the metric is becoming meaningless. Savills Studley:

In order to avoid marketing dramatically lower rates, landlords and sublessors continued to shy away from the concept of asking rates altogether. In the second quarter, only 26.8% of all available space was listed without face rent. In the sublease sector, rates were withheld for 58.1% of the available square footage.

But in every meltdown there are opportunities. “For financially and operationally sound companies” – so not exactly the average oil and gas driller – “with upcoming lease expirations or other space needs, uncertainty within the tenuous future should provide enough leverage to strike a tenant-friendly deal with flexibility and a generous tenant improvement allowance.”

If there were only enough of these potential tenants! And if only they didn’t have to move out of their existing office space!

In Calgary, the epicenter of the Canadian oil bust, the office sector is collapsing at a breath-taking rate. Read…  How the Oil Bust is Crushing a Downtown of Office Towers