To celebrate the second anniversary of the Great American Oil Bust.

Wolf here: In the oil bust saga, and in particular the chapter on North Dakota’s Bakken Shale, where miracles occurred on a daily basis, according to analysts during the boom, Whiting Petroleum plays a specially glorious role.

It’s stock soared during the boom to a high of over $90 a share by July 2014. It did a big acquisition that made it the “King of the Bakken.” Then during the bust, it was long considered one of the survivors. It would remain unscathed. All the old metrics were dragged out to explain why – how low its production costs were, etc. etc.

Now it’s trying to restructure its huge mountain of debt by using the carrot-and-stick method on its bondholders rather than resorting to bankruptcy. Meanwhile, shareholders have gotten mauled – shares have plunged 90% in two years to $8.44 today – and the mauling may not be over just yet.

So here’s Matt Badiali, on what’s happening right now with Whiting Petroleum, to celebrate the second anniversary of the Great American Oil bust….

Bankruptcies in the oil industry have slowed down. But there are still huge pitfalls awaiting investors. Take Whiting Petroleum (WLL), for example.

About two years ago, the Denver-based petroleum and natural gas exploration and production firm diluted its shares by 30% in a merger with rival Kodiak Oil and Gas. And today, Whiting is destroying the value of its shares… again.

Back in July 2014, Whiting acquired Kodiak Oil and Gas for $6 billion. It was a massive deal, centered on the Bakken Shale in North Dakota. The deal made Whiting the new “King of the Bakken.” After the merger, it had 18 drill rigs operating, the most in that area. It produced 107,300 barrels of oil per day there – 9% more than the other giant in the region, Continental Resources (CLR).

But the merger cost shareholders.

The increase in shares is what’s most concerning. When a company issues new shares, they don’t magically appear out of nowhere. A company is like a pie. In order to cut more slices, each piece must be smaller.


That means at the time of the deal, every shareholder gave up 30% of the value of each share. So if your shares were worth $1 each, they were only worth $0.70 after the merger.

At the time, the company hoped the value of adding Kodiak would more than replace the lost share value. But as you can see from the chart below, that didn’t work out so well… 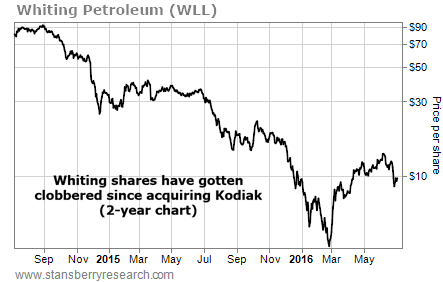 And it’s getting worse for Whiting investors today. You see, there’s another deal coming that will add even more new shares to Whiting’s count… without adding any value.

Whiting needs to cut its $5.3 billion in debt. To do that, it has to offer its bondholders something in order to entice them to swap. So Whiting decided to offer them shares. Starting June 23, the company plans to convert $1.1 billion in bonds to new shares. As long as Whiting’s share price remains above $8.75, the company will convert 4% of the debt per day into new shares for 25 days. It’ll make the conversion at that day’s closing price.

That’s $43 million in new shares per day for about a month. The company has already converted nearly 30% of that debt into new shares.

In the worst-case scenario, Whiting will issue 122 million new shares.

That’s roughly 60% of the current share count, according to Bloomberg. In other words, existing shareholders will lose more than half the value of their shares as the company converts that debt. And remember, that’s after Whiting already diluted the value of shares by 30% in 2014. That means Whiting shares will be worth about one-third of what they were prior to the Kodiak deal.

From the company’s point of view, this move is a better option than going bankrupt. For shareholders, it’s a huge loss. This is a terrible situation. If you own Whiting shares, get out now. By Matt Badiali, The Growth Stock Wire

I take the huge demand for dollars and safe sovereign debt as a warning. Read… Do Oil Markets Signal A Global Downturn?

7 comments for “This Company Is Stealing Value From Its Shareholders”