Instead of that promised “escape velocity.”

This year through June, there have been 91 corporate defaults globally, the highest first-half total since 2009, according to Standard and Poor’s. Of them, 60 occurred in the US. Some of them are going to end up in bankruptcy. Others are restructuring their debts outside of bankruptcy court by holding the bankruptcy gun to creditors’ heads. In the process, stockholders will often get wiped out.

These are credit fiascos at larger corporations – those that pay Standard and Poor’s to rate their credit so that they can sell bonds in the credit markets.

But in the vast universe of 19 million American businesses, there are only about 3,025 companies, or 0.02% of the total, with annual revenues over $1 billion; they’re big enough to pay Standard & Poor’s for a credit rating.

About 183,000 businesses, or less than 1% of the total, are medium-size with sales between $10 million and $1 billion. Only a fraction of them have an S&P credit rating, and only those figure into S&P’s measure of defaults. The rest, the vast majority, are flying under S&P’s radar. About 99% of all businesses in the US are small, with less than $10 million a year in revenues. None of them are S&P rated and none of them figure into S&P’s default measurements.

So how are these small and medium-size businesses doing – the core or American enterprise?

Chapter 11 filings (company “restructures” its debt at the expense of stockholders and unsecured creditors by shifting ownership to creditors, but continues to operate) soared 36% to 499 in June and 25% in the first half to 3,220.

Chapter 7 filings (company throws in the towel and “liquidates” by selling its assets and distributing the proceeds to creditors) jumped 28% in June to 1,909, and 25% in the first half to 11,211.

Like so many things, bankruptcy is a seasonal business – and one of the few truly booming businesses in the US at the moment. While stockholders and some creditors pay the price, lawyers and many others on the inside track, including hedge funds and private equity firms that are able to pick up assets for cents on the dollar, have a lot to gain. And if a company emerges with a more manageable debt load, it too might eventually prosper, though multiple bankruptcies are not uncommon.


Commercial bankruptcy filings reach their annual peaks in March or April, and this year is no different. While June filings edged down by 64 from May, the five-year average seasonal decline for the period, at 275, is over four times higher. And the seasonal decline in June was the lowest for any June since the Financial Crisis.

This chart shows the seasonality and how bankruptcies have fallen since the Financial Crisis, until they hit the low point in September 2015. In June, the worst June since 2014, bankruptcy filings were up 49% from September: 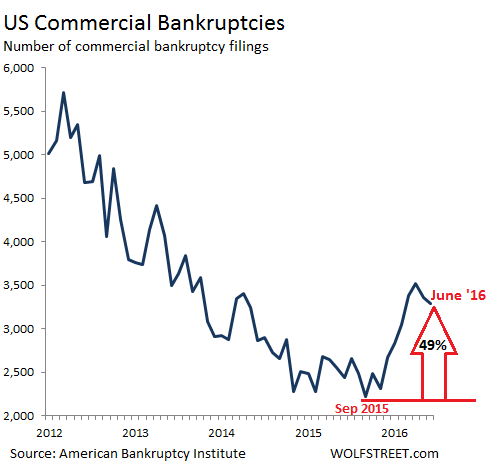 Defaults and bankruptcies are indicators of the “credit cycle.” Easy credit with record low interest rates – the handiwork of the Fed with QE and ZIRP – has allowed businesses to borrow beyond their ability to carry this debt as everyone had been drinking the “escape velocity” Kool-Aid, the notion that growth in the economy would finally and very soon kick in and reach escape velocity. Year after year, for six years straight, it failed to kick in.

Hopes are now running into reality, which is a slowing economy in the US and globally, just when corporate debt has reached previously unimaginable levels, as this chart of total commercial and industrial loans at all commercial banks in the US shows: 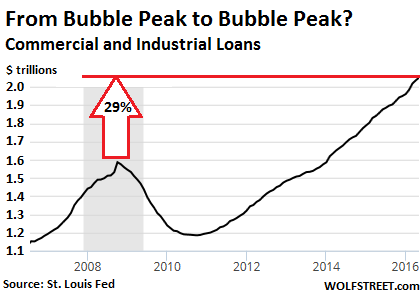 In October 2008, there were $1.59 trillion of these commercial and industrial loans outstanding. As of May 2015, there were $2.05 trillion outstanding, a 29% jump from the peak of the prior craziest credit bubble the world had ever seen to this even crazier credit bubble. And so, instead of that promised “escape velocity,” the bankruptcies have started to kick in.

Junk bonds swooned late last year and early this year as a consequence of billowing credit problems. But if you bought the crappiest of them on February 10, you’ve made a killing unless the company defaulted, in which case you got killed. So much money poured into junk bonds since then that prices soared even for the riskiest near-default issues. But is that honeymoon already over? Bad breath of reality next? Read…  What the Heck is Happening to Junk Bonds?

45 comments for “The Big Unravel: US Commercial Bankruptcies Skyrocket”