Deutsche Bank – “the most important net contributor to systemic risks,” as the IMF put it last week after a lag of several years – is having a rough time. Shares dropped 4.2% today to close at a new three-decade low of €11.63, down 48% since July 31 last year, lower even than the low during the doom-and-gloom days of the euro debt crisis and the Global Financial Crisis.

It’s not the only European bank in trouble. Credit Suisse dropped 1.7% today to CHF 9.92, another multi-decade low, down 63% since July 31. Other European banks are getting mauled too. The European Stoxx 600 banking index dropped 3% today to 117.69, approaching the Financial Crisis low of March 2009.

If July 31, 2015, keeps showing up, it’s because this was the propitious day when Draghi’s harebrained experiment with negative interest rates and massive QE came unglued, when European stocks, and particularly European bank stocks began to crash.

Deutsche Bank is so shaky that German Finance Minister Wolfgang Schäuble found it necessary to stick his neck out and explain to Bloomberg in February that he has “no concerns about Deutsche Bank.” Finance ministers don’t say this sort of thing about healthy banks.

At the time, CEO John Cryan – whose main job these days is propping up Deutsche Bank with his rhetoric – explained ostensibly to frazzled employees that the bank’s position was “absolutely rock-solid, given our strong capital and risk position.”

Days later, he followed up his rhetoric with a stunning ruse: On February 12, the bank announced that it would buy back $5.4 billion of its own bonds, including some issued only a month earlier.

“The bank is using market conditions to buy back these bonds at attractive prices and to cut debt,” CFO Marcus Schenck said at the time. “By buying them back below their issuance value, the bank is making a profit. The bank is also using its financial strength to provide liquidity to bond investors in a difficult market environment.”

Shares soared 12% on the spot! Its bonds rocketed higher. Even its contingent convertible bonds, the infamous CoCo bonds, though they weren’t part of the buyback plan, bounced. For example, its €1.75 billion of 6% CoCo notes soared from a record low of 70 cents on the euro on February 9 to 87 cents by March – a 24% move!

The ruse had worked! During the miracle rally, short sellers got their heads handed to them.


But it was one of the silliest, most desperate ways to prop up shares and bonds. And now the bond-buyback miracle-nonsense rally has collapsed, with shares at a new multi-decade low, and with bonds swooning.

This is what these 6% CoCo notes did: they plunged 5.7% today to 75 cents on the euro. Nearly the entire bond-buy-back miracle-nonsense rally has re-collapsed… 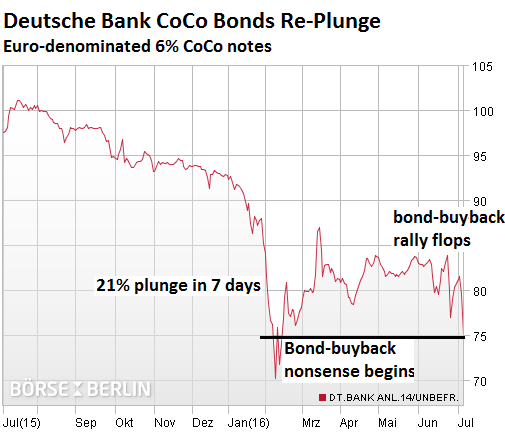 These CoCo bonds are a gem. To prop up Tier 1 capital, Deutsche Bank raised nearly €20 billion in 2010 and 2014, by selling shares, which diluted existing shareholders, and by issuing “contingent convertible” bonds, spread over four issues in dollars, euros, and pounds.

CoCo bonds, designed to be “bailed in” so that taxpayers don’t have to foot the entire bill, are a measure of how likely investors think a bail-in is.

Cocos are perpetual: they have no maturity date, and investors may never get their money back. But the bank can redeem them, usually after five years. Annual coupon payments are contingent on the bank’s ability to keep its capital above certain thresholds. If the bank fails to make that coupon payment, investors cannot call a default; they have to sit there and get used to it. And if the bank’s capital drops below certain thresholds, CoCos get “bailed in” by getting converted into increasingly worthless shares.

In return for these risks, CoCos offer a juicy annual coupon of 6% or higher. Investors, blinded by NIRP, jumped on them at the time. For example, the 6% euro CoCo notes traded at 104 cents on the euro in early 2014 shortly after they’d been issued, and at 102 in April 2015. Investors are ruing the day they didn’t sell!

The crashing shares and CoCos have a gloomy importance. Deutsche Bank will need to raise more capital to rebuild its buffer, fund more bad-loan losses, and pay more legal settlements for wrong-doing that keeps oozing from the woodwork. To raise capital, it will need to sell more shares and CoCos. With both crashing, it’s going to be tough. It’ll dilute existing shareholders, who are going to dump these shares in anticipation, which will sink them…. And issuing 6% CoCos when their brethren trade at 75 cents on the euro, or below, is going to be very expensive or perhaps impossible.

Italy is in the middle of a white-hot banking crisis. Risk of contagion in Italy and far beyond is huge. Read…  Investor Fears Spike as Italy (and the EU) Inch Closer to Doomsday Scenario