Business sales worst since 2012, inventories at crisis level, jobs next.

Total business sales fell again in February, the Commerce Department reported today. They include sales by manufacturers, retailers, and wholesalers of all sizes across the US economy. This measure is far broader than the aggregate sales by publicly traded companies, which too have been falling.

At $1.284 trillion in February, total business sales were down an estimated 0.4% from January, adjusted for seasonal and trading-day differences but not for price changes. And they were down 1.4% from the already beaten-down levels of February last year. They’re back where they’d first been in November 2012!

With optimism running wild about a booming Fed-designed future, executives have been hoping in aggregate that sales next month and next quarter would be better. But these wishes just haven’t come true. So now, way behind the curve, they’re struggling to bring their bloated inventories in line with the reality of their sales.

This brought inventories down a tiny 0.1% from January to $1.812 trillion. But they remained 1.2% higher than the already bloated levels a year ago.

The crucial inventory-to-sales ratio, which tracks how long unsold inventory sits around in relationship to sales, is now at a mind-bending 1.41. That’s the level the ratio spiked to in November 2008, after the Lehman bankruptcy in September had put the freeze on the economy.

Inventories represent prior sales by suppliers. When companies try to reduce their inventories, they cut their orders. Suppliers see these orders as sales. As their sales slump, suppliers adjust by cutting their own orders, thus causing the sales slump to propagate up the supply chain. They all react by cutting their expenses. And if it lasts, they’ll cut jobs. Inventory corrections have a nasty impact on the overall economy.

This chart shows how the inventory-to-sales ratio has totally blown out since late 2014, and what sort of inventory correction the economy is facing: 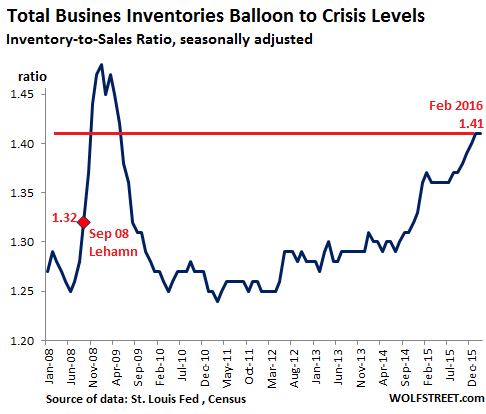 Let that sink in for a moment: 4.8% total sales growth in eight years! And these sales are not adjusted for price chances, and hence inflation, that have accrued over these eight years! That’s how dismal the recovery has been for US businesses.


Part of that problem is that sales since their all-time peak in July 2014 have by now declined 5.9%! These are US sales in US dollars; exchange rate variations don’t enter into the equation.

Which exposes a conundrum that will eventually be resolved, most likely in an ugly manner.

Employment is constantly being cited as one of the strong points of the economy. From February 2010 – the low point of employment in the Great Recession – through February 2016, total “non-farm employment” as defined by the Bureau of Labor Statistics has risen by over 14 million to 143.8 million.

A lot of them may be low-paid jobs and part-time jobs, leaving many people stuck in that vast quagmire of the “working poor.” But some sectors in some parts of the country have been booming. They’ve added jobs that pay well, however unsustainable this may be, for example in the startup boom that is starting to hit rough waters.

Yet these 14 million jobs created since the bottom of the Financial Crisis contrast with the US population that has since grown by 16 million people. Economists point at the 14 million jobs and pat each other on the back. But people trying to find a decent job confront a situation where their individual slice of the economy as actually shrunk during the “recovery” [read… This Shows Why Consumers Are Bogged Down].

The conundrum is this: Total sales have been declining since their peak in July 2014, while companies continue to create new jobs – the BLS counted another 215,000 new jobs in March: 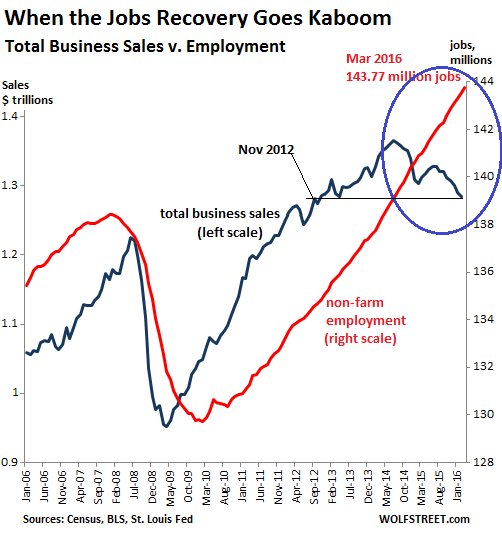 Historically, that mismatch doesn’t continue for long. When sales start falling, companies react by cutting costs. And they’ve already started doing it, albeit with a scalpel, not an ax.

Hence, job cut announcements are now reverberating through the media, for example when Alcoa disclosed on Monday that it is considering, after having cut 600 jobs in the first quarter, to cut another 1,400 jobs. But much of it happens without announcement, just a quiet drip, drip, drip – for example when word got out that IBM is laying off 109 workers at its Silicon Valley Lab, one of its two large complexes in San Jose. While job cuts in energy have reached crisis proportions, they’re now reaching far beyond energy.

Companies are showing the pain, particularly smaller companies: After 22 quarters in a row of year-over-year declines in total commercial bankruptcies, filings by companies of all sizes in March jumped 25% from a year ago, leaving ugly skid marks on the economy, banks, and investors. Read… US Commercial Bankruptcies Suddenly Soar

62 comments for “Why This Economy Is Now Running Aground”