Among the goodies: “reverse Yankee” landmines.

When a central bank like the ECB imposes negative interest rates along with QE on its bailiwick, funny things start to happen.

Investors become so eager to get any kind of visible yield that they will do the craziest things. They’re now chasing €3 billion of 50-year bonds that the French government placed today. The yield? 1.916%.

These 50-year bonds are bought by institutional investors who, in normal times, would have been institutionalized.

The impact of negative interest rates isn’t limited to the bailiwick where they’re imposed. These yield-desperate investors will go anywhere to get some yield. They’re now scrambling to get their hands on Argentina’s new dollar-denominated bonds: $15 billion spread over maturities of five, 10, and 30 years, expected to come to market next week.

This is a country that has spent 75 of the last 190 years in default, including 2013-15, 2000-04, and 1980-92. The next default might be ten years down the road. Since Argentina cannot default on those bonds via devaluation of the peso, it will have to default on them in the classic Argentine way.

But investors need the yield now, and to heck with the risk of default. They’re hoping they can dump these things – or at least move on to the next job – before the government pulls the plug.

Yet there are a few things that the noble combination of negative interest rates and QE has not been able to accomplish.

Consumers, whether in the Eurozone, Japan, or other NIRP countries, are inexplicably leery of becoming even bigger debt slaves by borrowing to consume. And those who try it by running up their credit cards find that negative interest rates, or even low rates, haven’t made it that far.

When the whole construct falls apart, those home prices deflate. Hapless homeowners get kicked out. A new financial crisis ensues, to be solved with even more QE and more negative interest rates.

A lot of consumers rely on the income from their bond portfolios and savings – whether directly or indirectly, via a pension fund for example. These consumers get trampled by low and negative interest rates. In turn, they cut back their spending. The more rates fall, the more they cut back.

Companies – even junk-rated ones – can pile on cheap debt. This has created unique opportunities for US companies to sell junk bonds at ultra-low yields to the financially repressed investors in Draghi’s Eurozone. By now, “reverse Yankees,” as these bonds are called, dominate issuance in the euro bond market!

These over-indebted US companies will have to service this euro-denominated debt with their dollar-denominated revenues, which gets even harder when the dollar falls against the euro. Reverse Yankees are the greatest gift Draghi has handed to Corporate America. And when these landmines explode, they will turn into yet another scourge Draghi has inflicted on his bailiwick.

Japanese bond investors too, as they’re getting mauled by their own central bank, are chasing yield overseas, and so they came to the attention of Wall Street, which is selling them a variety of tempting products, including highly rated yen-denominated bonds backed by dollar-denominated Collateralized Loan Obligations backed by leveraged loans of junk-rated US corporations. Yup.

Corporate America is the true beneficiary of these crazed negative-interest-rate policies in the NIRP zone.

So does that help the economy, boost demand, or trigger inflation in the NIRP zone? Nope. These companies are not investing the proceeds in productive activities in the NIRP zone. Instead, they buy back their own shares, pay their PE-firm owners special dividends, or pay off other investors. If they invest, they go after Vietnam, Mexico, and other cheap-labor countries.

Leaves governments, the other true winner in this scheme. With negative yields gracing much of their debt, they’re getting paid to borrow. In the negative-yield absurdity, a government deficit becomes a government profit center.

OK, bondholders pay the price. But by that time, the money managers who made those decisions will have moved on. Others hope to sell these bonds at even more negative yields long before they mature, and thus at a higher price, to the greater fool down the line, namely a central bank, which by then will already own much of the debt out there.

Whatever the real reasons for negative interest rates and QE – whether to bail out over-indebted companies, create more asset bubbles to enrich the few, allow some to borrow at negative rates while getting investors stuck with the bill, or create special opportunities for central banker cronies – the current and much publicized pretext for negative interest rates is to stir up consumer price inflation.

And that’s precisely what they have failed to do. Denmark has the longest experience with negative rates, dating back to July 2012. As Chris Lowe at Bonner & Partners noted with this chart, during four years of deepening NIRP, consumer price inflation fell from 2.5% to near 0%: 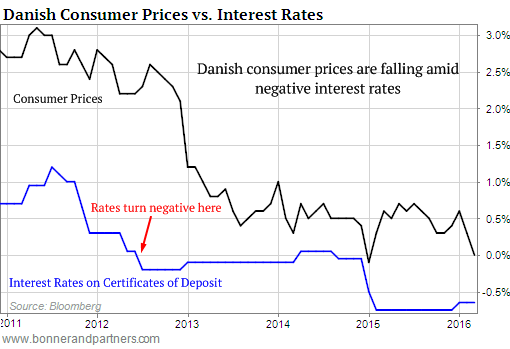