The authorities in China are in a desperate juggling act, trying to keep a growing number of rotting oranges, porcelain plates, burning torches, and explosives in the air all at the same time. But it’s not working very well anymore.

Part of this ongoing massive cash injection is in preparation for the Chinese New Year holiday starting February 7. And part of it is to keep everything afloat in a sea of liquidity, even as this liquidity is draining out the back in unprecedented quantities.

To fight the effects of capital flight, China has been selling down its vaunted foreign exchange reserves, which plunged by $108 billion in December, the largest decline ever. For the year, they fell $510 billion, or 13%, to $3.3 trillion, the lowest since November 2012. Money is fleeing China [read…. What Will China Dump Next, After Treasuries, to Keep Control?]

Much of this money is landing in the US. For example, plans have now emerged for a Chinese company, using Chinese money, to build a development in San Francisco that consists of two towers – including the second-highest in the city, behind the under-construction Salesforce Tower – and some other buildings, which are all part of a dizzying building boom here.

The Chinese real-estate investment company Oceanwide Holdings bought the site at First and Mission for $300 million a year ago. Now the San Francisco Business Times reported on the new plans. The project is expected to have 1 million square feet of office space, 778,000 square feet of residential space, and 251,000 square feet of hotel space.

Whatever the motivation, Chinese money it is. The PBOC pumps it into Chinese banks. Chinese investors take it out, one way or the other, bypassing, if they have to, the regimen of capital controls. And to keep the currency from plunging, Chinese authorities have been selling foreign exchange reserves to mop up the yuan these Chinese investors are selling.

But there’s a hiccup in trying to juggle all this.

“China is learning, the hard way, about the impossible trinity,” wrote Krishen Rangasamy, senior economist at NBF Economics and Strategy in a note. “You just cannot have free capital flows, a fixed exchange rate, and independent monetary policy all at the same time.”

Policymakers can only pick two from the three available tools.

By opening its borders to foreign investment and keeping a currency peg with the US dollar, China effectively surrendered monetary policy independence. The massive amounts of capital inflows during the boom years propped up asset prices including real estate. With the latter and more generally the economy as a whole now treading water, those flows are reversing fast.

To prevent the yuan from depreciating in synch with those outflows, the People’s Bank of China has two options. Either sell USD on the market to support the yuan (i.e. run down its currency reserves) or impose capital controls. Neither of those options is sustainable.

The PBOC can keep going for a while, but at a high price and with the knowledge that ultimately it efforts will be doomed: 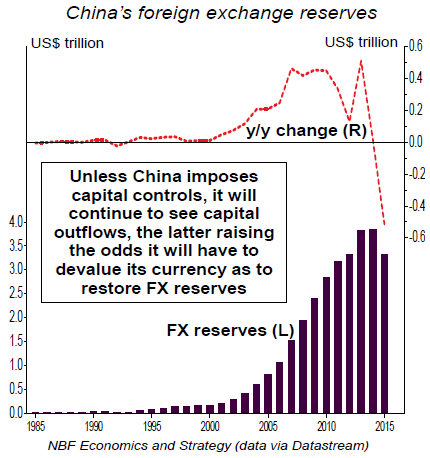 And imposing even stricter and broader capital controls to stem the outflow is the “exact opposite” of China’s intention to integrate its currency more into the global markets, not only as a payments and trading currency, but also as a reserve currency.

A third option is to allow the yuan to float freely (i.e. allow a sharp depreciation) which would give back control of monetary policy to the central bank and eliminate the need to run down reserves to support the currency.

But that option exposes China to the risk that the yuan will plunge, “thereby hurting confidence in the currency and creating a death spiral.”

It would also create some magnificent fireworks in the global markets. And it would expose China to an additional end-of-the-world anathema: the growing number of hedge funds that bet against the yuan – what China might call “vicious” shorting – would walk off with big fat gains.

The tsunami of Chinese money in US real estate may have come just at the nick of time, at the peak of a seven-year commercial real estate boom that is now showing some very big cracks. Read… Office Market in Houston Melts Down

53 comments for “A “Death Spiral” for the Chinese Yuan?”