The last time the total amounts of distressed debt and the number of distressed issuers had shot up to these levels was in October 2008, just after Lehman Brothers had filed for bankruptcy.

That’s how bad it is now in the US. It’s the essential consequence of years of artificially easy credit, the Fed-inspired blind confidence of yield-desperate investors, ludicrous corporate risk-taking to take advantage of those blind investors, private-equity asset stripping and buyouts, and among other things, the collapse of commodity prices that resulted from overproduction.

During the Financial Crisis, the total amount of distressed US corporate debt maxed out at $398 billion in December 2008 and then began to drop as the Fed was dousing the land with QE and started manually bailing out corporations and banks with emergency loans. Today, there are no bailouts in sight, and no one is talking about an emergency. So the distressed debt of $285 billion today is just the beginning.

These “distressed” credits are junk-rated bonds whose yields are at least 10 percentage points above US Treasury yields, according to S&P Capital IQ’s Distressed Debt Monitor. And this is what the trend in distressed debt looks like, in terms of dollar amounts (in billions, black line) and the number of distressed issuers (purple columns – purple to give them a lugubrious nuance): 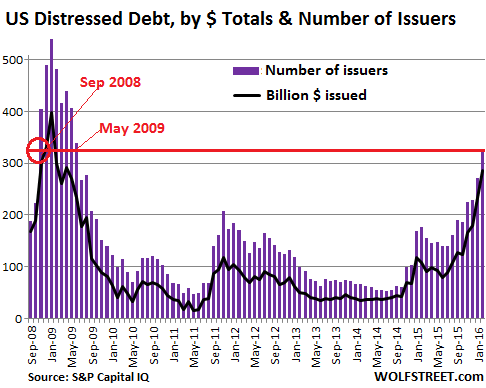 “The ratio indicates the level of risk the market has priced into the bonds,” explains S&P Capital IQ’s Distressed Debt Monitor. “A rising distress ratio reflects an increased need for capital and is typically a precursor to more defaults when accompanied by a severe and sustained market disruption.”

The chart below shows the Phoenix-like rise of the Distress Ratio of junk bonds (blue line) and the S&P/LSTA Leveraged Loan Index distress ratio (brown line), which lags a month, jumping from 7.8% in November to 9.1% in December: 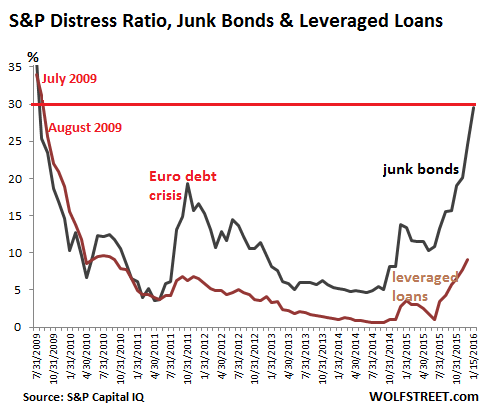 It’s convenient to blame oil & gas for the tremors in the junk bond market. But the remaining 70% of the distressed issuers are spread across other sectors – the “spillover effect to the broader speculative-grade spectrum.” It’s no longer just oil & gas!

In terms of dollars, the sector with the second most distressed debt is Telecommunications with $33.4 billion in distressed debt. Metals, Mining, and Steel is in third place ($28.7 billion), followed by Media and Entertainment ($26.6 billion).

The table shows the biggest debt-sinner sectors, in order of the amount of distressed debt. In parenthesis is the number of distressed issues: 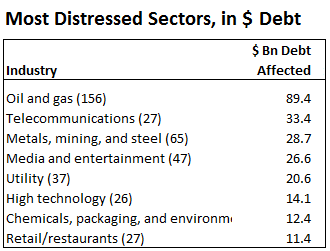 So which are the companies in each sector with the most distressed debt?

So what can bondholders expect? Not much. The report:

About 72% of the distressed issues are either unsecured or subordinated. In a default, these noteholders’ claims to the firm’s assets are secondary to the more senior debtholders’.

Distressed issues are the weakest of the speculative-grade population. Therefore, their recovery prospects are low.

What we’re witnessing is not only the end of the credit cycle, but also the festering consequences of a majestic central-bank engineered credit bubble. Cheap and easy money paved the way. For highly-leveraged corporate borrowers, those were the best times ever. Investors were blind to risks. They’d buy anything. And Wall Street knew it. And so risks were no longer priced in. But that has changed. Some risks are starting to be priced in. And creditors are finding out that they’ve been taken to the cleaners.

And how are banks that lent to the oil & gas sector dealing with it? “All of it is in the gutter.” Read… Banks Much Deeper in the Hole on Oil & Gas Collateral than they Pretend