Massive destruction of value can happen in this sector.

It’s one of the biggest news stories in the resource market right now. And it’s an example of the massive destruction of value that can happen in this sector.

In 1974, Glencore was founded as a metals trading house in London. When it went public in 2011, it said it marketed 60% of the world’s zinc output, 50% of its copper, and 45% of its lead. But Glencore’s loud, gunslinging CEO, Ivan Glasenberg, had bigger plans. Shortly after the 2011 peak of the resource bull market, Glencore raised more debt to invest in commodities.

For example, in February 2012, Glencore announced it was merging with miner Xstrata (the primary products of which were coal, copper, and zinc) to become one of the world’s largest metals producers. Glencore spent more than $40 billion on the purchase.

But then commodities prices declined. The prices of coal and copper are down 28% and 26%, respectively, since the deal closed in May 2013. Zinc has stayed nearly flat over this period. And now, Glasenberg is trying to stave off bankruptcy.

Thanks to all of its commodities investments, Glencore has $50 billion of debt, while its current market cap is $17 billion. Its debt is already more than five times its earnings before interest, taxes, depreciation, and amortization (EBITDA), so raising more debt isn’t an option.

To pay back this debt, the company is in the process of selling several assets – like its Australian and Chilean copper mines – for much less than it paid to acquire them. So far, it has sold $2.5 billion of equity for a fraction of what it could have received just a few months ago.

Glencore is cutting capital expenditures and costs. The company is also looking for “streaming” deals in which it exchanges future delivery of precious metals for an up-front lump-sum payment from streaming (also known as royalty) companies. In September, Glencore even announced it was scrapping its dividend.

As a result of its struggles, Glencore shares were cut in half twice from their year-to-date high at the end of April. Overall, since closing at 314.9 pence (equal to $4.83) on April 28, they’re down more than 60%. 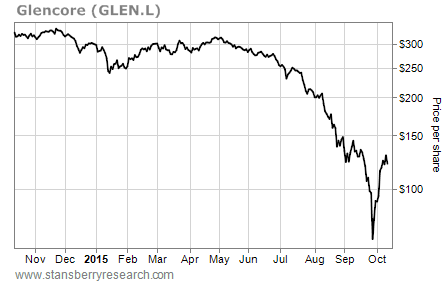 To be clear, Glencore still has one big positive that smaller commodities companies don’t: it owns a lot of assets. Glencore can generate a lot of cash by selling assets. This will help ensure it has enough cash to survive – for now. But it’s selling at the bottom of the market. This doesn’t create long-term value… it locks in losses. And selling assets hasn’t been enough for Glencore to prop up its share price.

Glencore isn’t the only resource company in this situation today… As I showed you last week, Big Oil companies like ExxonMobil, Royal Dutch Shell, Chevron, and BP are all struggling to produce oil at a profit, reward shareholders, and pay back their massive debts.

These names are all down around 20% since oil peaked in June 2014. And like Glencore, they could fall much further.

In short, Glencore is an example of what can happen to big resource companies with too much debt during a period of low commodities prices. If you’re a resource investor, be wary of any company that has racked up debt over the past few years. Until commodities prices turn around, companies like Glencore are going to struggle to pay it back. By Matt Badiali, Growth Stock Wire

10 comments for “Resource Investors, Be Wary…”