Shipping is a measure of the real economy. And it isn’t doing very well, apparently.

September is in the early phase of the make-or-break holiday shipping season. Shipments usually increase from August to September. They did this year too. The number of shipments in September inched up 1.7% from August, according to the Cass Freight Index.

But the index was down 1.5% from an already lousy September last year, when shipments had fallen from the prior month, instead of rising. And so, in terms of the number of shipments, it was the worst September since 2010.

It has been crummy all year: With the exception of January and February, the shipping volume has been lower year-over-year every month!

The index is broad. It tracks data from shippers, no matter what carrier they choose, whether truck, rail, or air, and includes carriers like FedEx and UPS.

Evidence keeps piling up in the most unpleasant manner that something isn’t quite right in the real economy. The world is now in an inexplicable slowdown – “inexplicable” for central bankers who’ve cut interest rates to zero or below zero years ago, and who’re still dousing some economies with QE even as governments are running up big deficits. And yet, despite seven years of this huge monetary and fiscal stimulus, the global economy is deteriorating.

In this scenario, the US has been the “cleanest dirty shirt,” as it is now referred to, after the term “locomotive” fell for obvious reasons into disuse. But the freight data throws more sticky dirt on that shirt.

For a historical perspective of just how crummy things have become, and how we’re made to think that they’re actually pretty good, after all the Fed’s gyrations: the number of shipments in September was down 13% from the levels in September 2004 and 2006.

But unlike the number of shipments that are in morose decline, there is real growth in the money spent on shipments. Since that peak September 2004, the expenditure index, which tracks how much shippers are paying carriers to get these shipments to their destination, has soared 48%.

That’s one of the big benefits of inflation for corporate America. It allows companies to keep up the charade of sales growth.

Revenues for carriers look great as long as they can raise prices, even if they transport less freight. But now they’re having a hard time raising prices: the expenditure index fell 6.6% in September from a year ago, the lowest for a September since 2012: 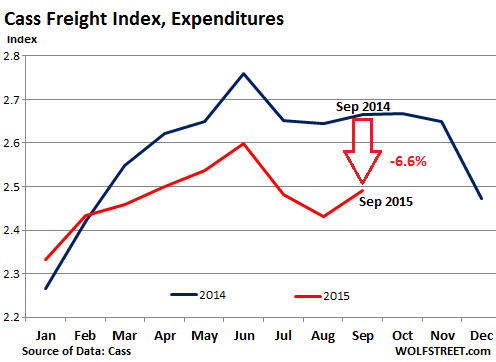 Trucking companies, according to Cass, “are holding rate increases down,” given the mix of capacity and demand, and rate increases are expected to remain “modest” for the rest of the year. But very helpfully, FedEx and UPS already announced rate increases effective November just in time for the holiday shipping season.

To explain the malaise that shipping is experiencing, Cass points at the Institute for Supply Management’s September PMI, which was dragged down by, among others, Production and New Orders. And Cass points at business inventories. They have soared since late last year, as over-optimistic orders outpaced the tough reality of sales.

Shipping companies benefit from that kind of inventory buildup. But when inventories reach levels where businesses begin to fret about being overstocked and start slashing orders to bring inventories down, shipping feels the pain.

36 comments for “US Freight Shipments Have Worst September since 2010”