Commodities had once again an ugly week. Copper hit the lowest level since June 2009. Gold dropped below $1,100 an ounce. Other metals dropped too. Agricultural commodities fell; corn plunged nearly 7% for the week. Crude oil swooned, with West Texas Intermediate dropping nearly 7% to $47.97 a barrel, a true debacle for energy junk-bond investors.

It was the kind of rout that bottom fishers a few months ago apparently didn’t think was possible.

For example, in March, coal miner Peabody Energy had issued 10% second-lien notes due 2022 at 97.5 cents on the dollar. Now, these junk bonds are trading at around 49 cents on the dollar, having lost half their value in four months, and 17% in July alone, according to S&P Capital IQ’s LCD HY Weekly. Yield-hungry fund managers that bought them at issuance and stuffed them into their bond funds that people hold in their retirement accounts should be sued for malpractice.

Other bonds too have gotten slaughtered in July.

“The performance is a disappointment to investors who purchased about $40 billion of junk-rated bonds from energy companies this year, thinking that the worst of the slump was over,” Bloomberg noted.

But the worst of the slump is far from over.

The riskiest junk bonds, tracked by the BofA Merrill Lynch US High Yield CCC or Below Effective Yield Index, have been hit hard, with yields jumping from the ludicrous levels below 8% of last summer to 12.19% as of Thursday, the highest since July 2012: 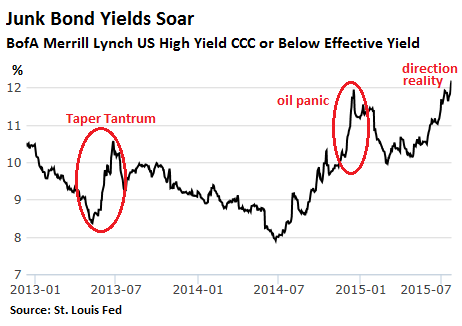 Note the spike in yield during the “Taper Tantrum” in the summer of 2013 when the Fed discussed ending “QE Infinity.” After which bonds soared once again and yields descended to record lows, until the oil panic set in, as investors in the permanently cash-flow negative shale oil revolution were coming to grips with the plunging price of oil.

But in the spring, bottom fishers stepped in and jostled for position as energy companies sold them $40 billion in new bonds, including coal producer Peabody. Now a lot of people who touched these misbegotten bonds are scrutinizing their burned fingers.

But how much worse can it get?

Take a look at the recent past. In the chart below, note how yields can spike when the real selling starts and when liquidity suddenly evaporates, while hedge funds are waiting on the sidelines, with the smartest among them knowing that the first waves of buyers will get burned.

In fact, the “bloodletting” that has transpired so far is a series of barely perceptible squiggles compared to real bond sell-offs: 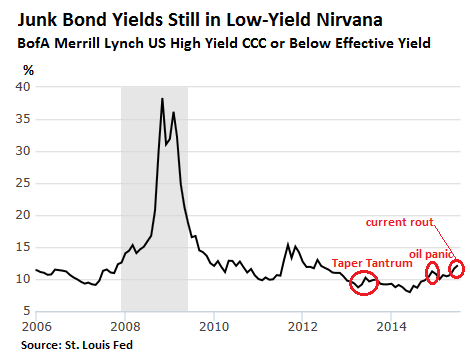 “It’s been a tough environment for issuers lately,” S&P Capital IQ’s LCD HY News Today summarized the high-yield market on Friday when Exterran Energy Solutions threw in the towel and withdrew its $400 million offering, while Builders FirstSource “was forced to” offer a higher rate and downsize its junk-bond offering in order to bamboozle fund managers into buying it.

This week, only $4.46 billion in junk bonds were sold by six issuers, nudging up the volume for the year to $194.34 billion, almost 3% behind last year’s pace. Sentiment, as LCD said, has “definitely soured for lower-rated offerings, and those tied in any way to commodities.”

In high-grade bonds, there has been a peculiar flavor…

A mad frenzy by companies to sell as much debt as possible while they still can, even as yields and spreads are rising and as prices are falling, before the junk-bond debacle spills over into high-grade bonds. LCD:

The high-grade primary market continues to be swamped with issuance, but the broader sector groaned under the weight of trailing supply and the increasingly aggressive fiscal policies of active issuers, including another spate of big-ticket benchmark deals backing M&A and share buybacks.

The United Health deal was the 11th this year over $10 billion, all of which were plowed into M&A and share buybacks, rather than productive investments. In 2014, there were only three such deals, same as in 2013; in 2012, there was only one. That’s how mad this frenzy has become.

But yield spreads between high-grade corporate bonds and equivalent Treasuries have been rising, and corporate bond prices in relationship to Treasuries have been falling. The BofA Merrill Lynch US Corporate Option-Adjusted Spread reached 1.53% (up from just above 1% a year ago), matching the peak of the oil panic in January, the widest spread since October 2013, “as technical dynamics deteriorated.”

Over 50% of the issuance so far in July was for M&A (up from 17% in all of 2014), including our latest hero, Anthem’s $54 billion deal to acquire Cigna, which added, as LCD said, “to the seemingly endless refill of the pipeline for blockbuster M&A-driven debt offerings.”

But buyers of high-grade bonds are very gradually coming out from under the Fed’s ether made of ZIRP and QE, and they’re smelling the acrid stench of burned fingers wafting through the junk-bond market down the street. They all know: the fire starts at the riskiest margin and works inward. And they’re seeing, despite whatever denials they might have, that this process has begun, just when US corporations carry a far greater load of debt than ever before – thanks to the greatest credit bubble in history – while revenue growth is stalling.

16 comments for “How Much Worse Can the Junk-Bond Sell-Off Get?”