It was the kind of day that shouldn’t have happened. Somebody dropped the ball at CNBC, or something.

Thursday evening, after three morose days in US stock markets, Amazon came out and said it made a profit! OK, a teeny-weeny profit of $92 million, a barely perceptible 0.4% of sales, a rounding error for other thriving companies’ with $23 billion at the top line. But for Amazon, the mere fact that there wasn’t a minus-sign in front of it, for once, was huge.

Its shares soared 22% after hours. The company’s valuation jumped by $40 billion. CNBC exploded with excitement. And Friday should have been a huge day for stocks.

From the first minute on, Amazon’s shares lost steam, drifted lower throughout the day and gave up half of their afterhours gain. The S&P 500 and the NASDAQ lost over 1%, the Dow almost 1%.

It topped off a bad week:

It didn’t help that Biotechs collapsed.

Biogen set the tone. It slashed its sales growth forecast for 2015 in half. Its multiple sclerosis drugs, its mainstay, are in trouble. Sales of Tecfidera, its main growth driver since its launch in 2013, ran smack-dab into reports linking it to brain infections. Sales of its injectable MS drug Tysabri and interferon-based MS drug Avonex both fell more than expected. And sales of Plegridy also disappointed. Shares of Biogen plunged 22%, wiping out $25 billion in stockholder wealth.

The Biotech ETF (XBI) dropped 3.6%. XOMA, which had already been eviscerated on Wednesday, dropped another 9.6% on Friday, to 94 cents, down about 80% for the week. A total of 25 biotechs in the index plunged over 5% on Friday.

Crude oil got hammered all week.

Particularly on Friday when WTI dropped to $47.97 a barrel, just weeks after $60 a barrel had been considered the new low going forward. Energy companies got slammed. Many of them are junk-rated, and their bonds sold off this week, dragging down the world’s largest junk-bond ETF (HYG) by 1.4%.

And just to show how fragile the newly bred IPOs are: Our California darling TrueCar, which went public last summer, lowered its outlook on Thursday afterhours and plunged 36% on Friday to $6.87 a share, down 24% from its IPO price of $9, and down 73% from its IPO-hype peak last year.

Here’s the misbegotten week for the S&P 500 index (chart by Doug Short at Advisor Perspectives): 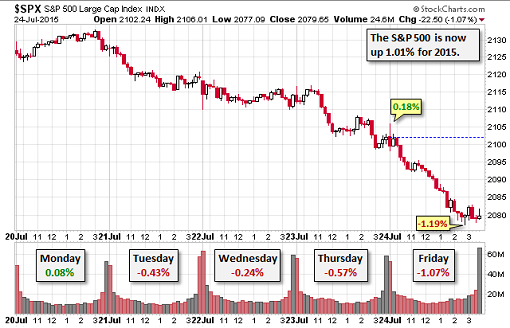 In the overall scheme of things? Not much! This weekly chart by Doug Short shows that the index has dropped below its 10-week moving average (blue line), once again, but remains resolutely in the same very narrow range of the past five months: 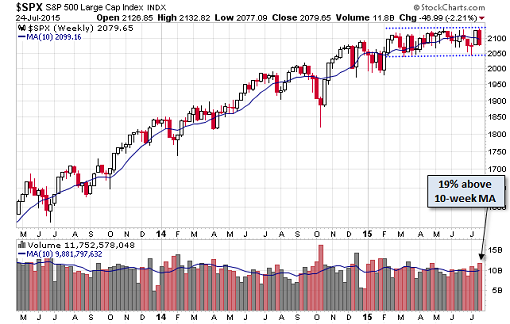 And here’s a long-term chart that shows the rallies and sell-offs since 2007. Turns out, this “sell-off,” if you can call it that, isn’t much of a sell-off, nor has there been a real sell-off since 2011. It makes the current languid stability of the S&P 500 near its all-time high for five months a nail-biter kind of a proposition: 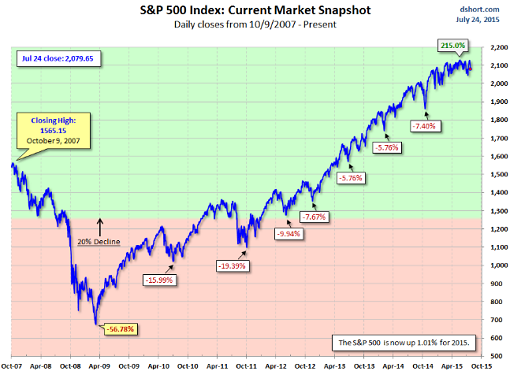 And in the rest of the world?

Seven of the eight indexes on our world watch list gave back part of their gains from the previous week. The one positive outlier was the manic-depressive Shanghai Composite, which advanced 2.87% over the past five sessions.

The government-mandated 12-session rally of the Shanghai Composite leaves it down “only” 21% from its crazy-bubble peak, after having crashed 32% by July 8.

The Western indexes fared the worst of our gang of eight. The UK’s FTSE 100 was the worst loser and a negative outlier in that its -2.88% decline more than eradicated its gain from the previous week.

This chart with an overlay of the eight indices so far in 2015 highlights Shanghai’s nicely defined bubble (top blue line): 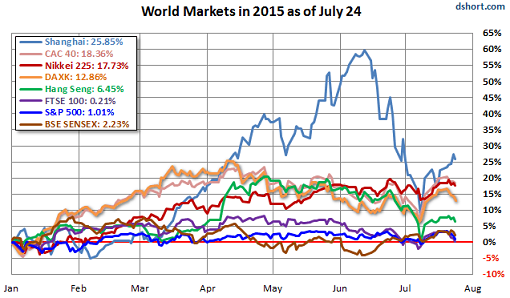 This table by Doug Short summarizes the performance of these indices so far in 2015, sorted from high to low. 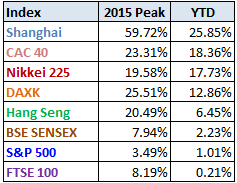 Note the column, “2015 Peak.” It shows the indices’ gains at their respective peaks this year. I want to direct your attention to number 2 on that list, the French CAC 40, up 18% year-to-date.

The irony is that the French don’t have much of an appetite for stocks. Their economy isn’t exactly booming either. This is foreign buying, mostly US hot money that has been pouring into the Eurozone to ride up Mario Draghi’s QE escalator.

Germany’s DAXK (price only, whereas the DAX includes dividends) went through the same procedure last year and early this year, front-running QE. In 2015, by April 10, in 100 calendar days, it had booked a gain of over 25%, only to give up half of it in the jagged swoon since.

The languid, range-bound stock market in the US over the past five months is treacherous; it’s not going to remain languid forever. It could break to the upside, for example if a Fed official spouts off some kind of craziness on CNBC or Bloomberg TV. Or it could break to the downside. Then, hopefully, all those sitting with their cursor hovering over the sell-button won’t click it all at once.

But even if the market were a “life-time short” opportunity, I’d never short it. I’d leave that to braver souls. Read…. Why I Don’t Short Stocks or Bonds in this Crazy Environment Where Nearly All Assets Are Overpriced

19 comments for “What the Heck Just Happened in the Global Markets?”