Everybody called it “Housing Bubble” after it imploded. Crazy things had been encouraged to happen to drive home prices into the stratosphere. Risks homebuyers and lenders took were enormous. Shady dealings everywhere. Everybody loved it. Governments at all levels incited it because tax revenues soar during housing bubbles. The housing industry did whatever it took to get there. Lenders got rich funding it. The Fed was looking down upon its creation with a divine sense of satisfaction. Then….

But real estate is local, so prices vary. In San Francisco, something peculiar has been happing. Since January 2012, the median price for all types of homes has shot up 107%, according to Paragon Real Estate Group’s June 2015 report. Now 42% higher than during the peak of the prior all-time crazy bubble.

Just how crazy has San Francisco’s housing market become? Here is Paragon’s chart of home prices going back to 1971. It compares San Francisco median house prices to the median prices of existing homes in California and nationwide. I circled in red Housing Bubble 1 and Housing Bubble 2, the latter being now in majestic bloom: 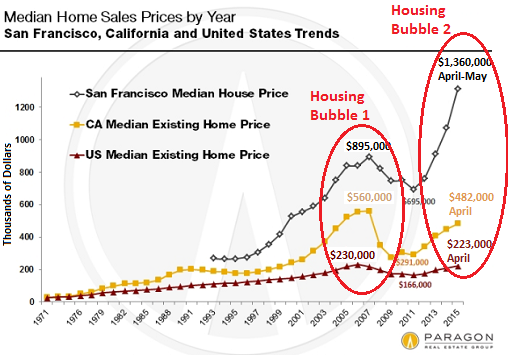 At the peak of Housing Bubble 1, the median house price in San Francisco was four times higher than the median price of existing homes in the US. It is now six times higher.

The US housing industry is still talking about the market not having “fully recovered yet.” The crazy peak of Housing Bubble 1 has now become the base line. The industry lives for housing bubbles. That’s when its actors get rich – and damn the torpedoes.

California overall is still not quite back at the tippy top of Housing Bubble 1, as some of the areas have been shameful laggards in this craziness. But the national median price of existing homes is only 3% below where it was during the craziest days of Housing Bubble 1. And the industry is hopeful to breach the old record soon.

Housing Bubble 2 has shifted the dynamics, with the “sweet spot” moving ever higher on the pricing scale. During the first five months of this year in San Francisco, a total of 1,941 homes were sold, but only 51 were in the under-$500K price range, or about 2.6% of all sales. You don’t even want to know what less than $500K buys in San Francisco. And only 342 homes of all types, or 17.6% of total sales, were in the under-$750K price range.

The chart by Paragon, based on sales reported to MLS by June 1, shows where the action is: 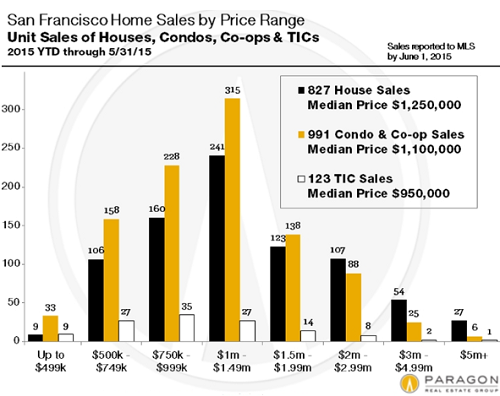 So, if you can’t afford that – even if you were born and raised in the city and had no intention ever of leaving – leave; that’s the message of these prices. Make room for people that can afford them. Or shack up with five other people.

San Francisco, while extreme, isn’t the only city with this kind of pricing insanity. It fits neatly into the central-bank scheme of inflating all asset prices into absurdity on a global scale: five-year government bonds in Europe that have soared to such levels that yields have become negative; Chinese stocks that have lost all connection to reality; etc. etc. And well, median home prices that have moved far beyond the reach of the median household income.

But in San Francisco, we know how to deal with this: “Riding this wave while we can, as far as we can, for as long as we can.” Because we know it’s not going to last. Read…  San Francisco Home Prices Spike, Exuberance Reigns

18 comments for “San Francisco vs America in Housing Bubble 2”