Not because he’d single-handedly keep the Eurozone duct-taped together, but because he’d start printing money – at any moment, really. Simply the idea of it had the markets salivating at the mouth, and they – along with the IMF, the French government, numerous other over-indebted governments, hedge funds, etc. – had been clamoring for it ever since. He’d monetize government deficits and debts, no matter what worrywarts in Germany might be saying.

That’s how Draghi’s “whatever it takes” had been interpreted. A promise to inflate asset prices into the absurdosphere. For two-and-a-half years, it had been dangled in front of everyone’s nose as inducement to buy, buy, buy.

Over those two-and-a-half years, his hedge-fund buddies and Eurozone banks made out like bandits from his promise, buying sovereign bonds of Spain, Italy, and even Greece, and watch them defy gravity. The banks could even do so with the money the ECB was shoving down their throats to do just this sort of thing.

As I wrote a week ago in my article, Without QE, “Eurozone Financial Markets Would Collapse”, the ECB already imposes negative deposit rates on Eurozone banks to flog savers until their mood improves. Excess liquidity is sloshing audibly through the system. Yields are getting close to zero even for bonds with longer maturities. Since 2011, the Eurozone’s current-account surpluses with the rest of the world have risen sharply, even while the euro was very strong. The last thing the Eurozone economy needs? Even more negative yields and an even weaker euro.

Now there are a lot of ruffled feathers in Germany, though Germany could have stopped the insanity if it had had the balls to do so and accept whatever the outcome might have been. But it didn’t have the balls.

Anti-money-printing prophet Hans-Werner Sinn, president of the Ifo Institute, which issues the closely watched Ifo Business Climate Index, called the scheme of creating money and monetizing government debt “illegal” under the treaties that tie the monetary union together. The German Constitutional Court will eventually render its own ruling, likely calling it “legal,” but with the usual laundry list of limitations and caveats. It doesn’t have balls either.

So Germany was having a self-inflicted bad-hair day, you’d think.

But what really happened was that German government bonds rose, with the 10-year yield dropping to 0.398%. And stocks blew out the top, with the DAX jumping to a new all-time high. This performance was duplicated around much of the Eurozone. And that conservative financial elite in Germany was glad that Sinn and others were out there lambasting the ECB, while they themselves were busy skimming off the cream.

It all makes sense. In the end, no one, not even the holier-than-though German anti-money-printers want to walk away from printed money, when it’s there to be taken. They too enjoy getting their hands on these artificial riches created out of nothing, no matter what the consequences for the real economy and the ultimate costs.

So, for your amusement, and for mine too, here is a cartoon by Merk Investments that reflects better than anything else Germany’s official mood: 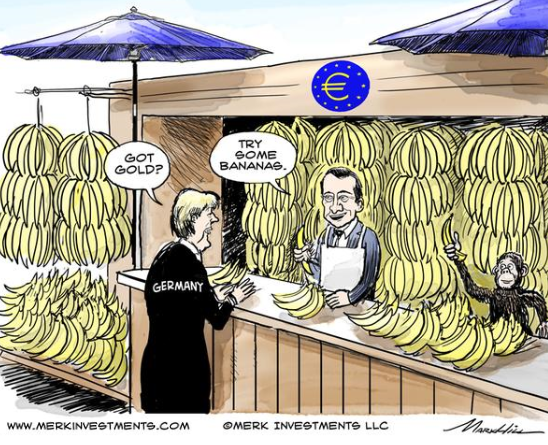 And what has QE actually accomplished around the world so far? We just got numerical confirmation. Read…  Look Who’s Dragging Down the Global Economy Though No One Is Allowed to Say it