The decimation of drilling activity in the US oil patch is getting serious. The number of rigs drilling for oil dropped by another 49 rigs to 1,317 in the latest week, after having dropped by 55 and 61 rigs respectively in the prior two weeks. The rig count is now down 18.1% from the second week of October 2014, when 1,609 rigs were drilling for oil.

During the last three weeks alone, the oil rig count plunged by 165 rigs. In this data series, the oil industry had never idled that many rigs in such a short time. In percentage terms (-11.1%), the last time the rig count started plunging like this after a peak was in December 2008, as the stock-market crash was in full swing.

And yet, it’s just the beginning. The chart shows the phenomenal fracking-for-oil boom that started after the financial crisis. The fracking-for-natural-gas boom had started years earlier and ended in a glut and total price destruction that continues to this day. 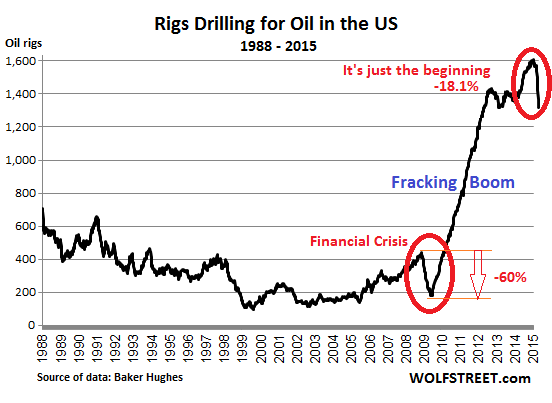 The count for oil rigs plunged by 60% during the financial crisis from peak to trough. If the same happens this time around, it would drop by 965 rigs to bottom out at 643 active rigs drilling for oil. That would be a brutally long way down.

And there are indications that this won’t be over anytime soon: despite all these cutbacks, crude oil inventories in the US are soaring. Read…  This Chart Shows Why the Oil Bust Will Last