Three tidbits with charts from the Transportation Statistics Annual Report 2022.

We’re going to look at three tidbits that I found particularly interesting in the newly released Department of Transportation’s 234-page Transportation Statistics Annual Report 2022: A measure of truck congestion at the 10 worst bottleneck locations in the US; barge rates on the Mississippi River System, which exploded this fall; and container freight rates in both directions between the US and China, with US-bound rates still 200% above the rates before the pandemic.

Truck congestion at the 10 worst bottlenecks in MPH.

One of the new thingies in 2022 that came out of the supply-chain chaos is a slew of supply-chain measurements, including by the Bureau of Transportation Statistics (which is part of the DOT), which came up with monthly data of the average trucks speed at the 10 worst bottleneck locations. The data goes back to January 2019. The latest entry is for October 2022. Here is its map of truck bottlenecks: 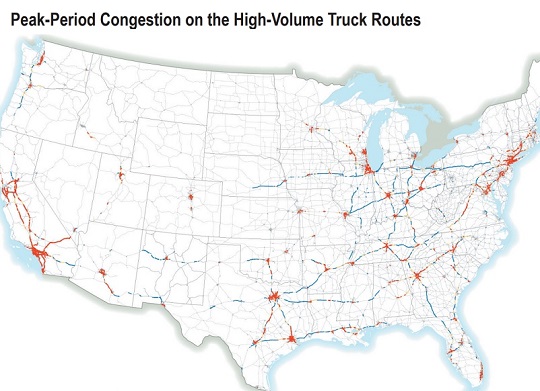 In April 2020, passenger vehicle traffic plunged amid the lockdowns, and with fewer passenger vehicles on the road, trucks practically flew through the bottleneck locations at an average speed of 50 mph, up from 21 mph in April 2019!

In every month of 2022 through October (dark blue line in the chart below), the average truck speed at these 10 bottlenecks was faster than in 2019. But in the spring, the speed differential to 2019 was minimal, as the stimulus-fueled boom in goods was still going on, though beginning to fade, while other vehicles were starting to crowd the bottlenecks again.  Then in the summer and fall, the boom in goods faded further, and average truck speeds at these 10 bottlenecks rose to about 25 mph. 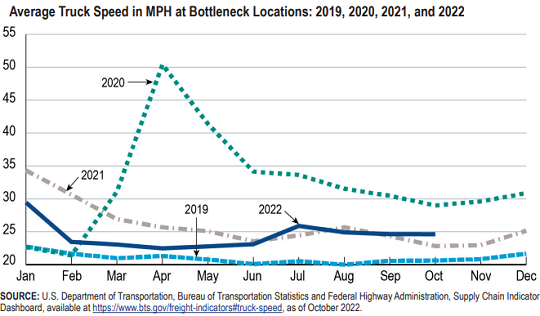 In the summer of 2022, the weekly barge rates for downbound freight originating from seven locations along the Mississippi River System, which includes its tributaries, spiked to record highs in September and early October, nearly reaching $120 per ton at one point. They dropped in November but remain high (click on chart to enlarge): 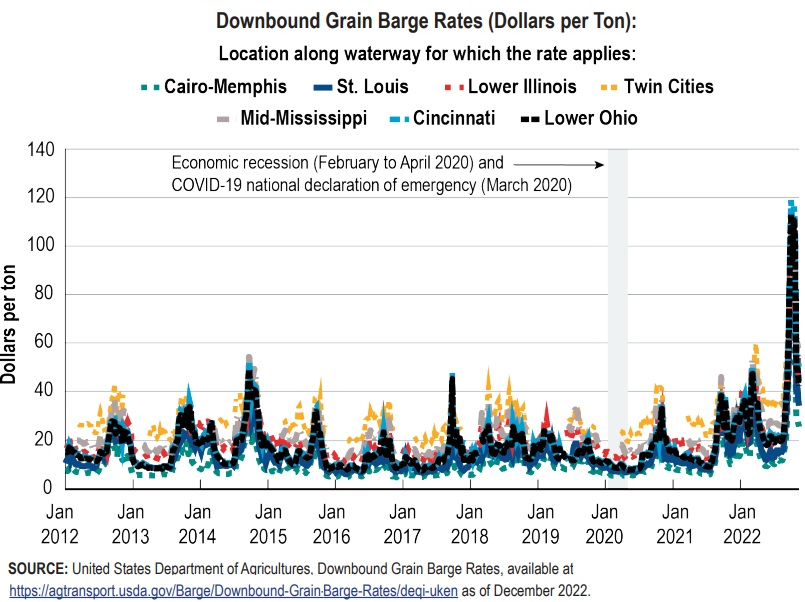 The report outlines why this historic spike in downbound barge rates occurred this fall: excruciatingly low water levels on the Mississippi due to drought. Some excerpts from the report:

“Low water levels, especially on the vital stretch between Cairo, Illinois and Memphis, Tennessee, have caused groundings and the need for dredging that have closed sections of the river and halted barge movements for intermittent periods. U.S. Coast Guard District 8 (New Orleans) reported a backup of over 2,000 barges on the Lower Mississippi in early October.

“Low water also restricts the loads each barge can carry, and the narrower channel restricts the number of barges in a single tow [USDOT BTS 2022i]. These restrictions affect the ability to transport cereal grain and other bulk products by water, which account for over half of the 165.5 million tons of freight that moved in 2020 between states touching the Upper Mississippi System and Louisiana.

“Rail shipment is the normal alternative to barges, but the rail system can have difficulty absorbing such a massive short-term shift. Moreover, concerns over a possible rail strike in 2022 made shippers hesitant to rely on a rail option.

“Grain and other farm products, however, are seasonal.”

“Unfortunately, disruptions to freight flow caused by low water have coincided with the peak shipping season for U.S. corn and soybeans, the Nation’s largest export crops. The October downbound grain and agricultural product shipments on the Lower Mississippi below Lock and Dam 27 were predominately soybeans and corn, leaving those major export commodities most vulnerable to the Lower River disruption.”

Container Freight Rates: down from peak, but still up 211% from pre-pandemic rates.

Pandemic stimulus caused a historic boom in sales of goods in the US, and many of these goods, either finished goods or components, are imported from Asia, and particularly from China. This explosion in demand caused all kinds of issues, including congestion of ports and rail yards, which tangled up containers.

This sudden burst in demand, chaos at ports and railyards, and “the control of a few companies over prices” caused freight container shipping rates from Central China to the US West Coast to spike by 578% between February 2020 and the peak in August 2021, according to the report.

Ocean freight rates then began to fall, but as of October 2022 remain 211% above the pre-pandemic rate. 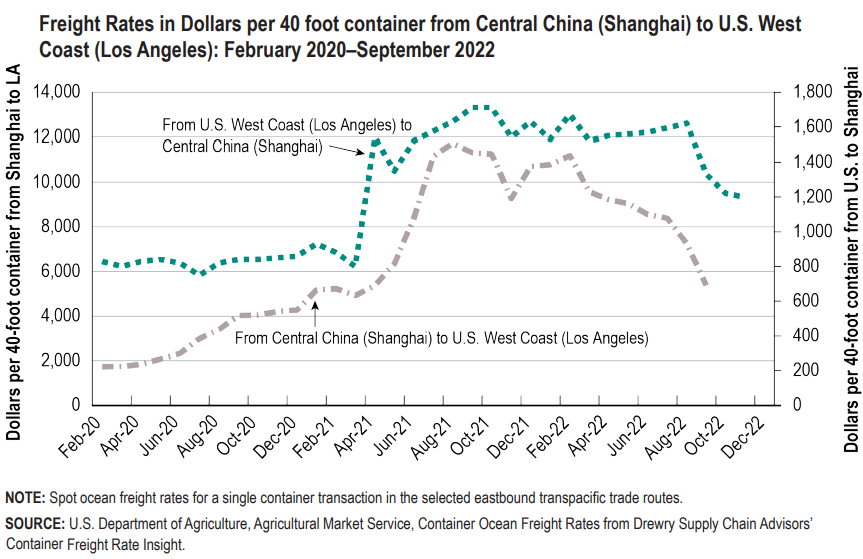