Not all commodities are plunging: Game of Inflation Whac A Mole.

Here we go again. This morning, the notoriously volatile natural-gas futures, which have taken down numerous hedge funds over the years, jumped to nearly $10 per million Btu and currently trade at $9.75, the highest since July 2008, up 146% from a year ago, and up 350% from three years ago, topping off a series of spikes that started in early July, just when folks got used to the plunge in commodities prices.

The price has now recovered all of its plunge that started in June 8, when a fire damaged and shut down the Freeport natural gas liquefaction plant in Texas, which cut LNG export capacity by 17%. The plant is scheduled to resume exports at partial capacity in October. The part of the plant that was damaged will take longer.

The shutdown of the LNG export facility removed some demand from the US, and the plunge in price was a classic knee-jerk reaction that has now been unwound. Since the low point on June 30 ($5.39), the price has spiked by 81%: 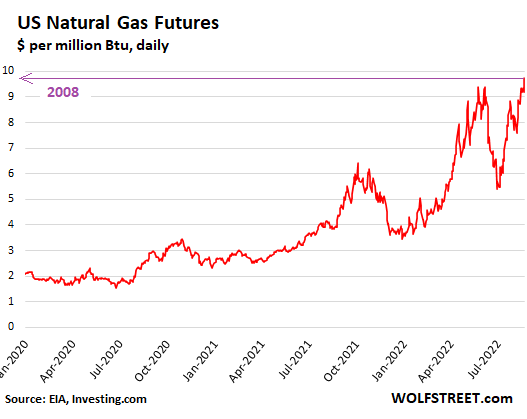 The June-July plunge in natural-gas futures prices had been one of the reasons cited why inflation in the US has peaked. Utility natural gas piped to homes accounts for about 1% of total CPI. In the July CPI reading, utility gas piped to the home fell by 3.6% from June, the first month-to-month decline since January, and a welcome relief after the spikes in the prior months, including +8.2% in June from May, and +8.0% in May from April.

Spikes in futures prices don’t immediately translate into higher natural gas prices at home, but eventually they do. And this is another example of the game of inflation Whac A Mole, with price spikes popping up here and there all over again.

Natural gas also feeds into electricity prices via power generators, into food prices via fertilizers made from natural gas, and into prices of all kinds of other products.

The two-year surge in natural gas prices was powered by US exports of LNG, which have been booming, with new LNG export terminals coming online one after the other — seven since 2016. A small LNG terminal at Kenai, Alaska, has been operating for years. LNG exports added to demand for US natural gas and increasingly linked US natural-gas prices to global LNG prices.

For operators of natural-gas-fired power plants, struggling to meet demand from air conditioning, the hit to natural gas export capacity this summer came just at the nick of time, and the plunge in the price of natural gas during the summer was a godsend. But that is now over.

Exports of LNG have soared since 2016. The US also exports natural gas via pipeline to Mexico and to a smaller extent to Canada, but those pipeline exports have been roughly level over the past few years. What has added new demand on a large scale in the US are the LNG export terminals.

The EIA has released LNG export data through May, which doesn’t yet include the potential decline in exports in June and July due to the shutdown of the Freeport LNG terminal. It will release June export data at the end of August: 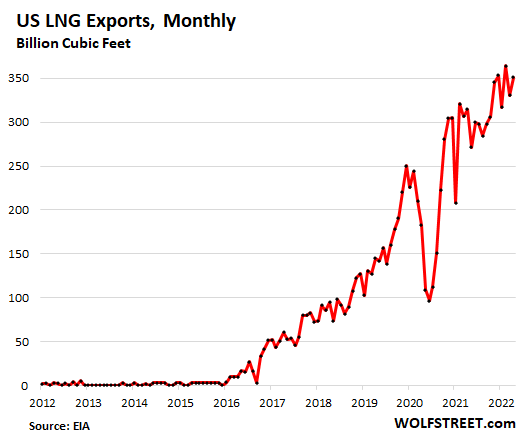 But even at today’s price, natural gas futures are a lot lower than they were during the spikes in 2005 and 2008, and just a tad above where they’d been in 2000. Back then, there was talk of natural gas shortages, and LNG import terminals were built to import expensive LNG to the US.

And now the US natural gas market has been connected to global markets via large-scale export terminals that are arbitraging away much of the price difference between US natural gas and global LNG prices. So welcome to the new old world of higher natural-gas prices.

Seen in this light, today’s price of natural gas in the US is not all that extraordinary, and it’s still a lot lower than in many other parts of the world: 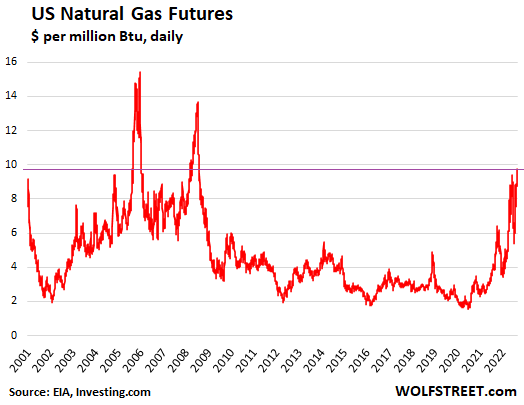