But future bond buyers get the higher yields.

The interesting thing is that no one at the Fed is trying to talk down those spikes in Treasury yields and mortgage rates. It shows that those yields are going where the Fed wants them to go, and that the Treasury market is coming around to the Fed’s rate-hike plan, and that those yields have a long ways to go, given that CPI inflation is 8.5%, a gigantic mess that has unfolded over the past 15 months, finally, after 12 years of money-printing.

The two-year Treasury yield spiked by 15 basis points today to 2.61%, the highest since January 2019. This has been a huge move in just seven months. When the two-year yield goes over 2.83%, it will be in territory not seen since 2007, as the Treasury market begins to price in the Fed’s coming policy action to crack down on inflation: 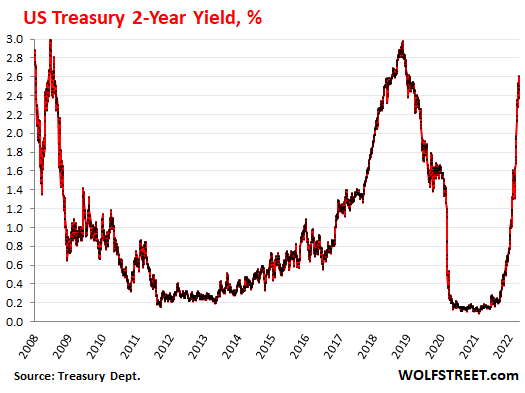 Even the biggest doves at the Fed are now fully on board the rate-hike train, and it’s only a question of how fast and how long. Chicago Fed President Charles Evans, one of the biggest doves, is “comfortable” with 25-basis-point hikes at every meeting this year (there are seven more), and even he is “open” to 50-basis-point hikes: “we want to be humble and nimble, and get to neutral before too long – maybe 50 helps, I’m open to that,” he said. 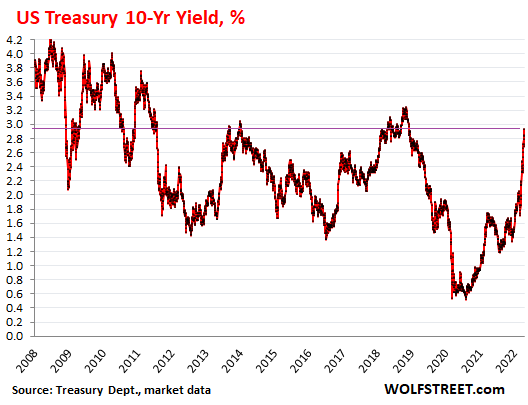 When yields rise, it means prices of those bonds fall, and prices fall the hardest of bonds with the longest remaining maturities.

And it’s a massacre for people who invested in what they thought was a very conservative and prudent instrument, namely a bond fund tracking long-term Treasury securities, when in fact it turned out to be a highly risky wager on long-term Treasury yields always going lower forevermore.

The iShares 20+ Year Treasury Bond ETF [TLT], which tracks an index of Treasury securities with at least 20 years of remaining maturities, dropped another 0.75% today, is down 19.5% year-to-date, and has plunged by 30.6% from the peak in August 2020, which was when long-term Treasury yields had hit historic lows, and which was – with hindsight – the moment the greatest bond-market bubble in US history began to implode: 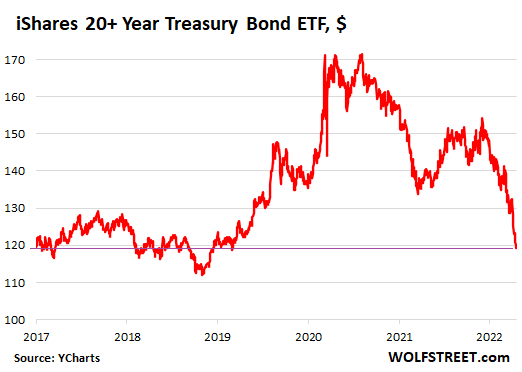 But future buyers get the higher yields. Treasury yields across the spectrum are still way below the rate of inflation, but they’re a lot higher than they were, and they’re a lot higher than what banks are paying in interest, even so-called “high-yield” savings accounts, which still pay nearly nothing because banks are awash in deposits that they don’t know what to do with – thanks to the Fed’s ridiculous amount of money printing – and the last thing many banks want now is to attract even more deposits.

So folks looking for yield that blows past the interest that banks are paying, and that blows past the dividend yield of the S&P 500, they have some options now and better options coming their way with Treasury securities. As yields rise, future buyers get to enjoy them.

But note: If you buy Treasury securities, buy them outright at issuance and plan to hold them to maturity, at which point you will get paid face value no matter what happens in between, and stay away from longer-term bond funds unless you want to speculate on the direction of interest rate movements, that’s an iron rule of mine, exemplified by the TLT fiasco.

There is no one that can persuade me that this jump in mortgage rates isn’t going to have a serious impact on the housing market. It’s the Fed’s way of getting the housing bubble under control before it tears up the financial system again: 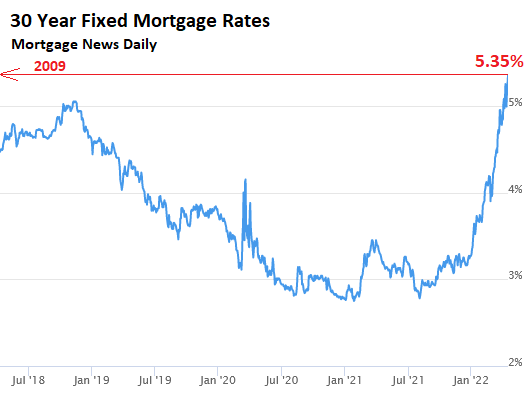 The yield curve is getting less weird. It reflects the Treasury yields across the spectrum, from the 1-month Treasury bill to the 30-year Treasury bond, and there were some weird things happening in March and early April, but these weird things have now started to reverse just a little.

Below is the yield curve today (red line), reflecting today’s yields across the Treasury spectrum; and the yield curve on August 4, 2020 (green), at the peak of the greatest bond bubble ever. The weird thing was when the three-year yield and then the two-year yield rose so much that they were higher than the 10-year yield – leaving the yield curve “inverted” in those parts. This has now un-inverted. 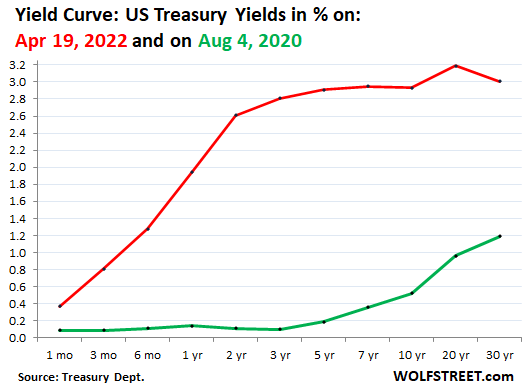 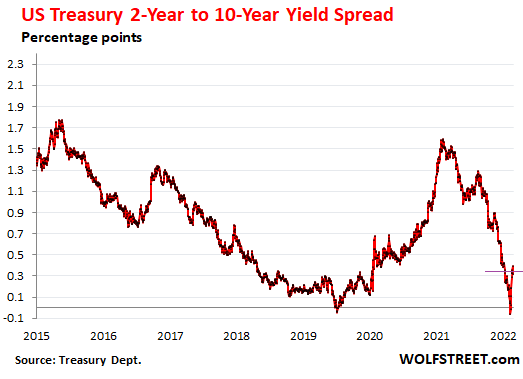 The Fed locks down the short end of the Treasury yields via its policy rates, including its rates for overnight repos and overnight reverse repos, which box in the overnight yields in the gigantic repo market.

The longer end of the Treasury yields, from five-year maturities on up to the 30-year yield is still weighed down by the Fed’s obese balance sheet. QE was designed to push down long-term yields, and it did that. Now QE has ended, and the yields have come up some, but not nearly enough. But QT – the kick-off is sometime after the Fed’s meeting in May – will do the opposite of QE and will remove little by little that weight and will allow long-term yields to rise further, while the short-term yields will rise with the Fed’s rate hikes. And this should make for much higher long-term yields, higher mortgage rates, and a steeper yield curve as QT gets going.