White knuckle moments as nothing goes to heck in a straight line?

The crude oil market had a white-knuckles moment today. WTI futures plunged intraday from $126.82 a barrel to $103 a barrel for a few moments, as the bottom just fell out after the UAE called for OPEC+ to increase production, followed up by Iraq which said that it could increase production if OPEC+ asks. A production increase might actually happen because selling more oil at these prices would be great for a whole slew of OPEC countries, and they’d love to do it.

The announcement worked to bring the price down, after having hit a panicky $130 earlier this week, though I don’t think talking the price down was the goal; OPEC generally doesn’t talk down the price. That’s the job of US Presidents.

The price of WTI then bounced from there and currently trades at around $110. I denoted the 18% flash crash with arrows. Note the crazy price spikes and volatility since the beginning of March (chart via Investing.com, each column is one day): 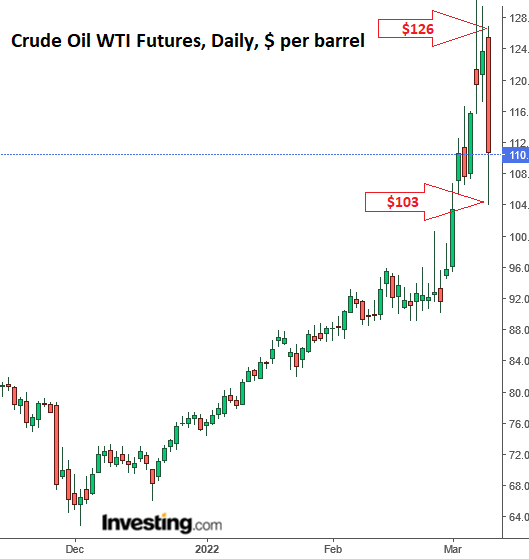 The two-year Treasury yield jumped 5 basis points today, and 13 basis points over the past two days, to 1.68%, the highest since November 2019, as rate hikes are making their way into the calculus.

This yield is still ridiculously below the rate of inflation as the Fed – the most reckless Fed ever – is still pressing short-term interest rates to near 0% while CPI inflation in February, to be released Thursday morning, will likely be close to 8% and go the wrong way from there: 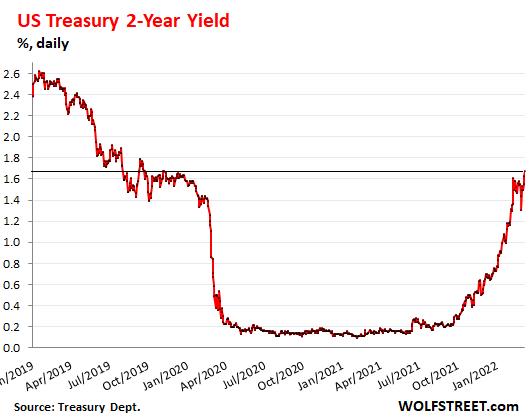 Volatility in the two-year yield has been going wild from day to day, mostly in the upward direction, including a 25-basis-point jump on February 10, but also peppered with sudden drops: 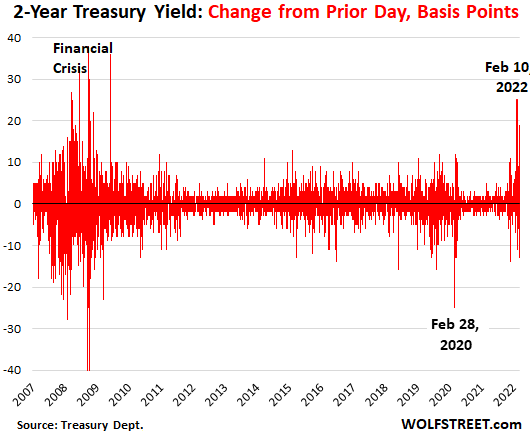 The 10-year Treasury yield jumped 8 basis points today and 20 basis points over the past three days, reclaiming 1.94%, which it had given up at the end of February: 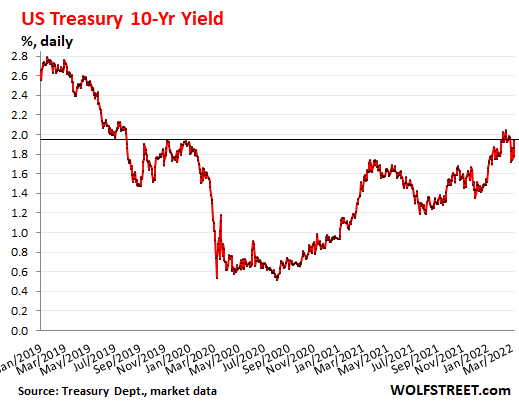 European stocks spiked massively today, in the manner most typical for bear-market rallies, with the German DAX up nearly 8%. The spike still leaves the DAX down 15% from its high on January 5. The French CAC 40 jumped 7.1%, the London FTSE 3.2%. A lot of fun was had by all.

We got some good news from Amazon afterhours. Amazon shares got hammered down by 26% since their peak in July last year. The company has come under legal scrutiny, and today it emerged that a Congressional House Committee has referred Amazon to the Department of Justice for possible criminal prosecution of the company and some of its executives.

And so Amazon finally did the right thing and afterhours announced a 20-1 stock split and a $10 billion share buyback program to financially engineer itself out of this. And that was great because after the announcement, its shares jumped 6.6%, and now they’re down only 21% from their high.

Asian stocks currently are jumping as well, with the Nikkei up 3.7%, the Shanghai Composite Index up 1.8%, and even the battered Hang Seng Index up 2.0%, leaving it down only 32% from its recent high in February 2021.

Dip-buying after big selloffs is alive and well, following the WOLF STREET dictum: Nothing goes to heck in a straight line. And so is dumping after big run-ups.

Treasury securities had big run-ups when fear drove investors into them, and their prices jumped and their yields fell. Then the dip buyers abandoned ship and Treasury prices fell and yields jumped again, which is what happened over the last couple of days.

Stock market dip buyers swung into action today in a concerted effort, after the selloff since March 2. But since January 3, the S&P 500 index has marked a trail of lower lows and lower highs, punctuated by violent white-knuckle swings intraday and from close to close. Dip buyers that weren’t able to get out fast enough got mauled.

The market faces inflation that has been unleashed by two years of ridiculously massive QE and interest rate repression by the most reckless Fed ever, and by two years of government stimulus of all kinds. Now this inflation is made far worse by the utter chaos in the commodities markets. Double-digit CPI inflation is a possibility for this year.

But the stock market is also facing the end of QE (now), rate hikes (starting March 16), and Quantitative Tightening later this year. As this explosion of inflation across the economy has become a huge political problem for the White House, the Fed may tighten more and shed assets faster than the stock and bond markets, which are still in denial, even dare to think.