Personal Income and Spending under Red-Hot Inflation and Omicron.

Not adjusted for inflation, the personal income of all Americans combined, from all sources – from wages, salaries, interest, dividends, rental income, unemployment compensation, stimulus checks, Social Security benefits, etc. but not including capital gains –  was essentially flat (seasonally adjusted) in January from December, fell by 2.1% from the stimulus-inflated January 2021, and rose by 11.5% from January 2020, according to the Bureau of Economic Analysis today.

But, in “real” terms, meaning adjusted for the raging inflation, personal income from all sources fell by 0.5% in January from December, and fell by 7.7% from the stimulus-inflated January 2021 and was up only 3.7% from January 2020. But wait… this was for all consumers combined, and the population has grown.

On a per-capita basis — more people divvying up the national pie — and adjusted for inflation, minus personal taxes: The “per-capita real disposable income” fell 0.5% for the month, fell 10.1% from a year ago, and was up only 1.8% from January 2020. In other words, the red-hot inflation over the past six months ate up more than the growth in personal income and further whittled down the purchasing power of labor: 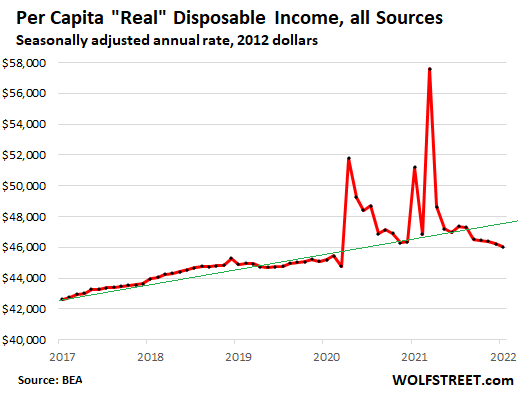 But Americans disposed of their dwindling “real” income heroically.

Not adjusted for inflation, consumers increased their spending by 0.8% in January from December (seasonally adjusted), and by 11.6% year-over-year, blowing money left and right in a heroic effort to keep the economy hopping.

Adjusted for inflation: “real” consumer spending in January, seasonally adjusted, bounced back from the decline in December. The decline in December and the equal bounce-back in January were likely the result of seasonal adjustments in an era when the normal seasonality was upended by the pandemic, which I discussed when it showed up in retail sales too.

Compared to January 2021, consumers increased their “real” spending by 5.4%, and compared to January 2020, by 4.6%, outspending inflation even as it ate up their income increases plus some, and despite Omicron which constrained spending on services over the past three months, as we’ll see in a moment. 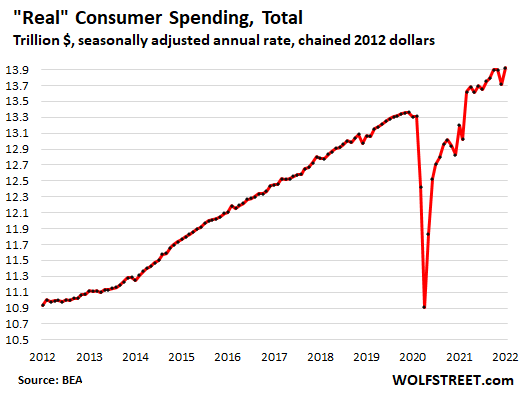 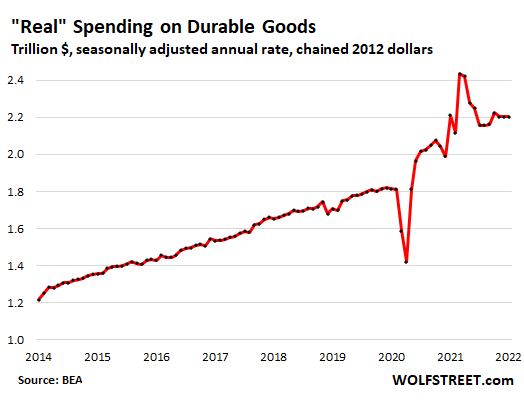 “Real” spending on nondurable goods – mostly food and beverages, all kinds of household supplies, and energy – also spiked during the pandemic, even adjusted for inflation, which was massive for nondurable goods (9.8% in January). Some of the increase during the pandemic has to do with the shift to working at home, when what used to be business spending for food, toilet paper, coffee, and other office supplies shifted to the household and became consumer spending.

In January, real spending on nondurable goods was flat with December but up 5.0% from the stimulus inflated January a year ago, and up 13.5% from two years ago: 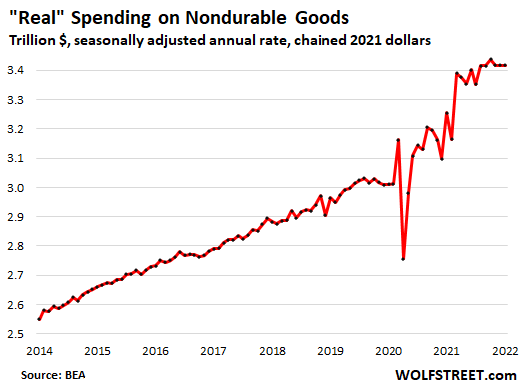 “Real” consumer spending is adjusted for inflation on the basis of the PCE price index, which was also released today, and which runs generally lower than CPI, and which includes the “core PCE” price index, the lowest lowball inflation measure the government issues, and which therefore the Fed uses for its inflation target. 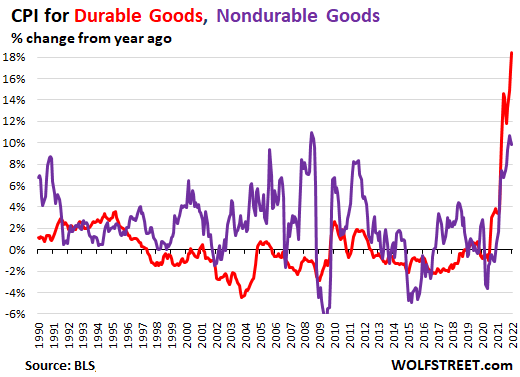 In January real spending on services was flat month-over-month for the third month in a row, but at the level of mid-2019, having nearly recovered the pre-pandemic peak.

The three-month flat spot was likely caused by Omicron when some people cut back on some services, such as airline tickets and non-emergency healthcare services: 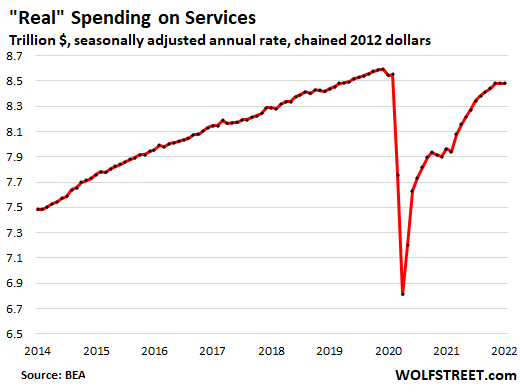 Despite Omicron, despite sour consumer sentiment, despite shortages that render some goods – such as new cars – hard to buy and often involving long waits, and despite income gains getting eaten up by inflation, consumers are still in spending mode. And households where income isn’t enough are once again charging up their credit cards, and many are using their homes as ATMs via cash-out refis. Money is still exceedingly easy, and after $11 trillion in free money from the Fed and the government, delinquencies are at record lows, and consumers are doing their jobs borrowing and consuming.

152 comments for “Inflation Ate their Lunch, But Americans Made Heroic Efforts to Spend”