The only measure of stock market leverage that is reported monthly is margin debt at brokers, via FINRA. Much of the stock market leverage isn’t reported, such as Securities Based Lending, and even banks and brokers that fund this leverage don’t know the leverage in the overall market, or even the leverage of their client if that client is levered as well at other banks. Funds can leverage at the institutional level. There is leverage associated with options and other equities-based derivatives, etc.

Leverage is the great accelerator of stock prices on the way up and on the way down. And the one part of leverage that we can see plunged in January by the largest dollar-amount ever, and by one of the largest percentages ever.

Stock market margin debt, after a historic spike during the Fed’s QE money-printing and interest-rate-repression extravaganza that started in March 2020, plunged by $80 billion in January from December, the largest dollar-decline in the data, which goes back to 1990, and the third month in a row of declines, to $830 billion, according to FINRA today: 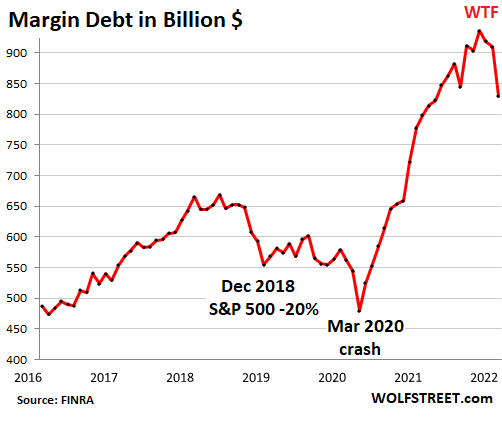 But margin debt is still gigantic, with just a small portion having been unwound. The blistering historic spike in margin debt during the Fed’s $4.7 trillion QE in 22 months was a historic outlier, peaking last October with a two-year increase of 67%.

In November, the Nasdaq peaked as we now know with hindsight. Since then, it has fallen 16%.

But many high-flying stocks have gotten totally crushed, one by one, many of them started getting crushed in February a year ago, with many dozens of these high-fliers down 60% to over 90% from their highs. And leveraged bets by enthusiastic retail investors on these stocks were brutally unwound, either voluntarily or via margin calls.

In percentage terms, margin debt plunged by 8.8% in January from December, the largest decline in the data since some key moments:

Fed shifts from QE to QT: 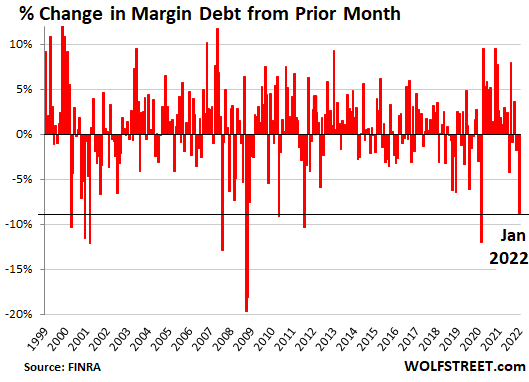 Many of the highest-flying stocks have already gotten crushed: A good sample of the most hyped and highest-flying stocks is included in the ARK Innovation ETF [ARKK]. It dropped 5.0% today to $64.80, the lowest close since June 15, 2020, and is down by 59% from the peak in February last year. Some stocks in the ETF have collapsed much more from their peaks, such as Twilio (-64%), Zoom (-72%), or Roku [-77%].

People who took on high levels of margin debt to fund their holdings of stocks represented by the ARK Innovation fund have either voluntarily liquidated at least part of their positions or were forced to by their broker – and this widespread forced selling accelerated the plunge in prices of those stocks: 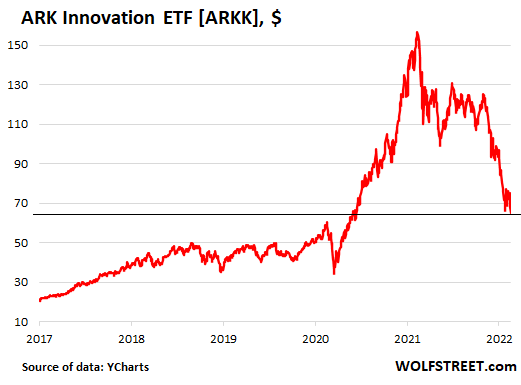 High leverage in the stock market is one of the preconditions for a massive sell-off.

In October, just before the sell-off took shape in the Nasdaq, the Fed warned in its Financial Stability Report about high leverage among young retail investors: “The median leverage ratios of younger retail investors are more than double those of all investors, leaving these investors potentially more vulnerable to large swings in stock prices, as they have a larger debt service burden.”

“Moreover, this vulnerability is amplified, as investors are now increasingly using options, which can often boost leverage and amplify losses,” the Fed said.

Everybody knew that, and margin debt tracks some of it, but it just took the Fed a while to figure it out.

In the long-term view of margin debt and its relationship to stock market “events,” it’s not the increases in dollar amounts that matter – given the effects of inflation – but the steep increases in margin debt before the selloffs, and the stock market sell-offs that followed. But no increase was more magnificent than that of 2020 and 2021, neither in absolute terms (dollars) nor in relative terms (percentage): 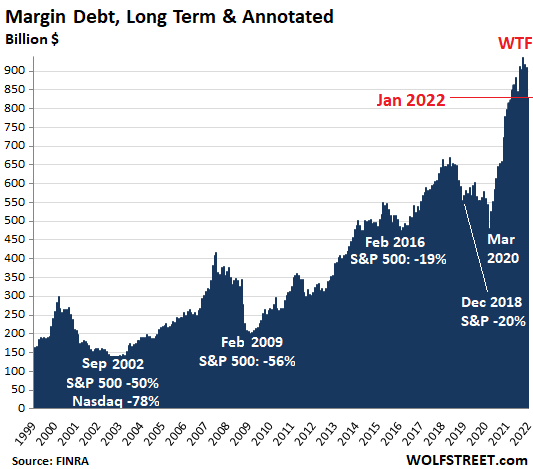 176 comments for “Margin Debt Plunged as Stocks Tumbled and High-Fliers Got Crushed. But Leverage Still Gigantic, Long Way to Go”