Three-decade trend brought about by Corporate America and the religion of globalization.

US imports of goods in November spiked by $40.5 billion, or 19.1% year-over-year to a new record worst of $252 billion, seasonally adjusted, according to the advance estimate by the Census Bureau today. The relentless three-decade trend was brought about by Corporate America – manufacturers, distribution channels, and retailers that have been encouraged to offshore everything to cheaper countries – according to the religion of globalization: 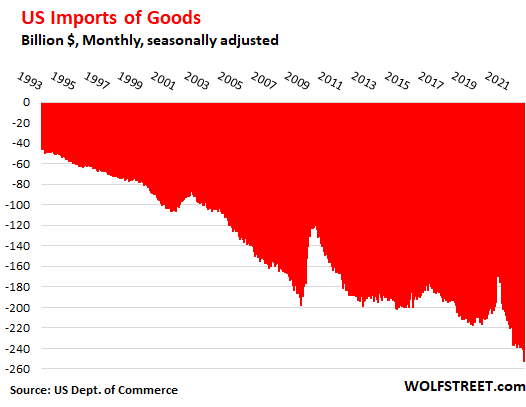 Note the rapid deterioration since 2019, powered by the fiscal and monetary stimulus that kicked in after the March and April 2020 slow-down. When American businesses and consumers buy goods, they buy much of it from other countries.

The only major category of goods where imports improved – meaning, imports declined – were automotive vehicles and components, and they improved for the wrong reasons. The semiconductor shortages hit production not only in the US, but also assembly plants in Japan, Mexico, Canada, and Europe.

But the chip shortages have started to abate in recent month, depending on the automaker, and production overall has picked up some: Auto imports in November, at $28.5 billion, were 10% from two months ago (September).

The table shows imports by major category in November, in billion dollars, compared to November 2020, and the year-over-year percentage change.

The increase in exports was primarily driven by the 37% surge in exports of industrial supplies, which include petroleum and petroleum products, to $56.7 billion, by far the largest category of exports, accounting for 36.7% of total exports.

The vaunted exports of agricultural goods are in the category of Foods, Feeds, and Beverages, which accounts for only 9.5% of total exports. 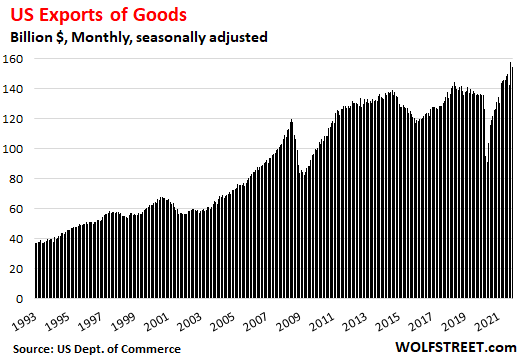 The table shows exports by major category in November, in billion dollars, compared to November 2020, and the year-over-year percentage change.

This $28 billion year-over-year increase in exports of goods in November wasn’t nearly enough to counterbalance the $40.5 billion deterioration in imports. As a result, the trade deficit in goods deteriorated to a new worst record of $97.8 billion: 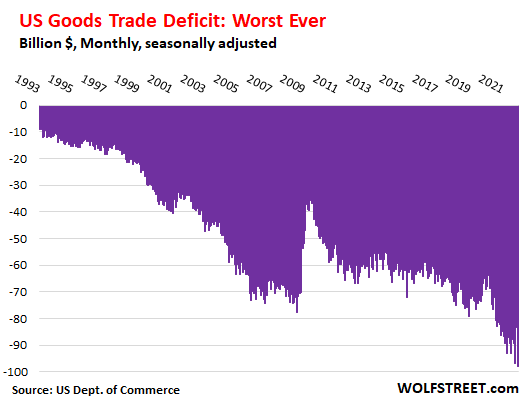 204 comments for “Stimulus for the Rest of the World: Imports Spike, Trade Deficit in Goods Worsens Relentlessly”