In a number of shopping corridors, asking rents collapsed by 50% to 73%, amid a slew of vacant stores. But in one corridor, rents jumped.

The meltdown of street-level retail space along the 17 major shopping corridors in Manhattan – some of them world renown and immensely expensive – kicked off in 2015, and most of it happened before the pandemic. The pandemic dragged the meltdown into its sixth year. Landlords and retailers are trying to find their way in a new environment. And in the process the old sky-high rents of 2015 have collapsed.

Since 2015, average asking rents in many retail corridors have collapsed by 50% to 73%, including in some of the most ridiculously expensive corridors. That 73% collapse in the average asking rent for street-level retail stores over the past six years occurred in the Times Square area – Broadway and 7th Avenue, between 42nd Street and 47th Street in Midtown – from $3,683 per square foot per year in the spring of 2015, to $998/sf in the fall of 2021, the lowest in over a decade, according to the Real Estate Board of New York’s new Manhattan Retail Report. There were 16 stores available for rent: 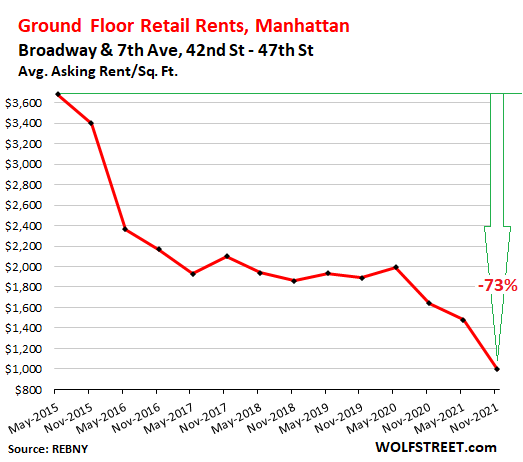 Despite the 73% collapse in average asking rents in the Times Square area, rents are still expensive. For example, the rent of a 2,000-square-foot store, at $998/sf per year, would amount to nearly $2 million per year. But that is down from $7.4 million per year in 2015, which is just ridiculous and had to blow up.

A global luxury retailer catering to jet-lagged tourists would treat that kind of store as a showcase of its products, and would accept losses from that store as a form of promotional expense, while relying on its other stores to make money. But even that equation got hard to work out.

Retail rents didn’t collapse in all shopping corridors. In a few, rents sank only moderately over those six years. And in one of them, the grand exception, retail rents have soared by 69% since 2015.

Everyone is trying to sort out where to go from here. Landlords want to fill their stores, and some retailers want to open up shop, and there is enormous flexibility among landlords with rents, buildouts, and other incentives to make something happen.

Manhattan’s street-level retail shops and service operations depend on a mix of residents, tourists, and commuting office workers.

Tourists are coming back to the City, but not at pre-pandemic levels. The Times Square Alliance, cited by the REBNY, reported that the number of visitors to Time Square in October was still down by 26% from the average in 2019. What is happening to asking rents for street-level stores in the area is depicted in the chart above.

Office workers are straggling back, but are still largely working from home, with office occupancy in the New York City metro still down about 65% from pre-pandemic levels, according to entry systems provider Kastle.  Storefront vacancy rates in areas that are depending on office workers remain much higher than shopping corridors that service local residents.

The REBNY points at the “daunting list of obstacles” that landlords and prospective tenants face:

“Leases continue to take longer to reach completion. A small subset of retailers – primarily QSR [quick service restaurants], clicks-to-bricks and some health and wellness – are in expansion mode. Most other tenants do not have any sense of urgency. Buildout is frequently delayed by construction labor shortages, a lack of materials or even slower lender approval. Finding and training staff is a challenge. Finally, supply chain shortages can impede product offerings.” 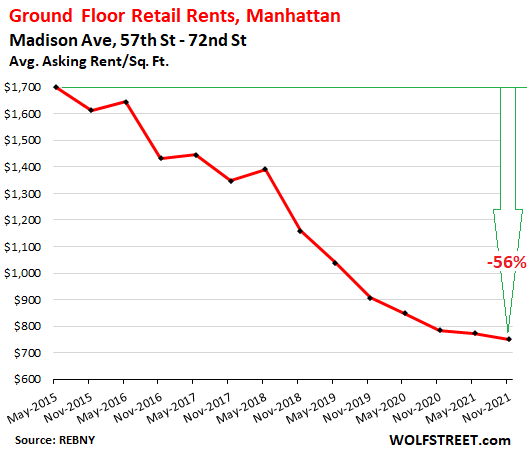 On East 86th Street, between Lexington Avenue and 2nd Avenue, the average asking rent has increased over the past 12 months to $327/sf per year but is still down 28% from 2015. There were 11 stores available for rent: 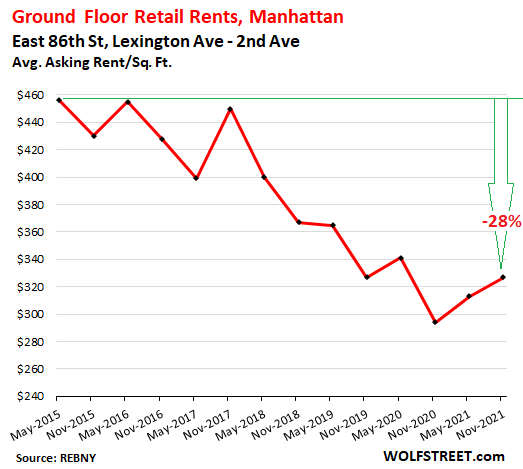 On Third Avenue, between 60th and 72nd Street, the average asking rent rose over the past six months to $214/sf, but is still down 42% from the peak in 2016. There were 24 availabilities: 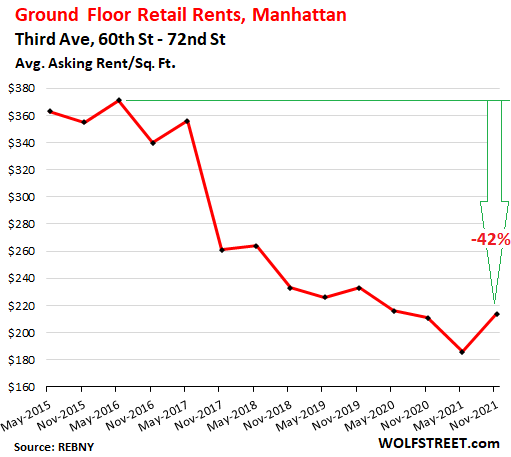 On Fifth Avenue, from 42nd Street to 49th Street, the average asking rent bounced over the past six months to $676/sf, but was still down year-over-year, and has collapsed by 51% from the peak in 2016: 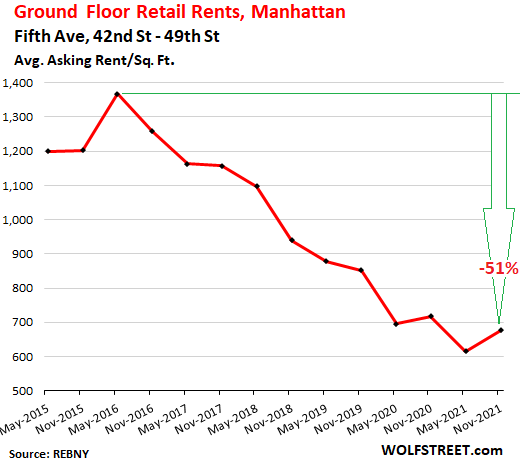 On Fifth Avenue from 49th Street to 59th Street, the average asking rent was roughly flat year-over-year, and down 29% from a strange-looking 2018, at a still enormous $2,628/sf per year: 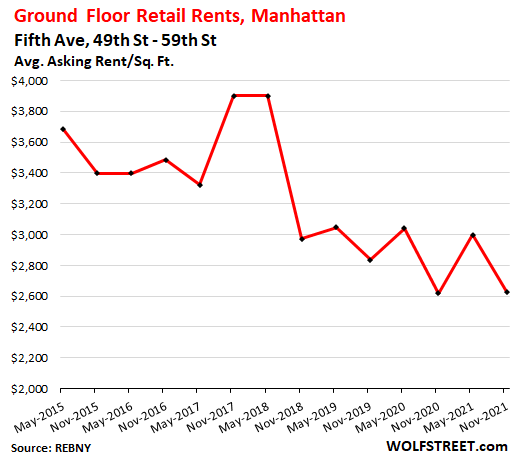 On West 34th Street between Fifth Avenue and Seventh Avenue, the average asking rent fell to $390/sf, and has collapsed by 61% from 2015. There were 17 availabilities: 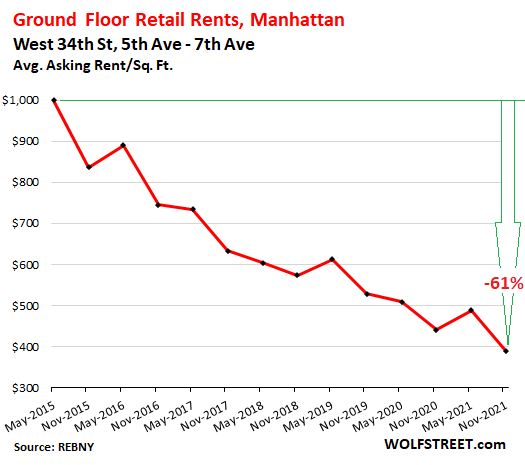 Here’s the exception. On Broadway, between Battery Park and Chambers, the average asking rent has been ticking down for two years, now at $395/sf, but is still up 69% from 2015. Now with 25 availabilities, rents are struggling to hang on: 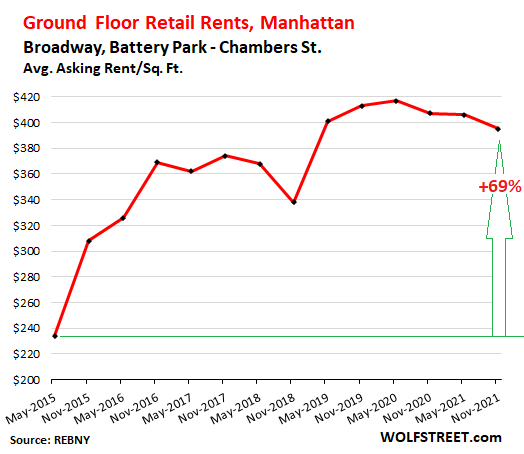 On Broadway between Houston and Broome, the average asking rent ticked up over the past six months to $327/sf, but collapsed by 67% from 2015. There were 20 availabilities: 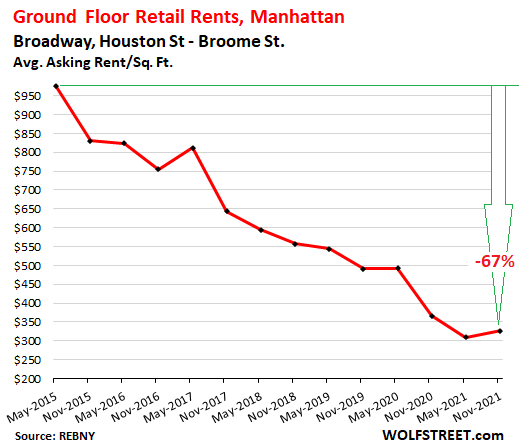 On Bleecker Street, between 7th Avenue and Hudson, the asking rent also ticked up over the past 6 months, to $250/sf, but collapsed by 51% from the peak in 2016. There are 17 availabilities: 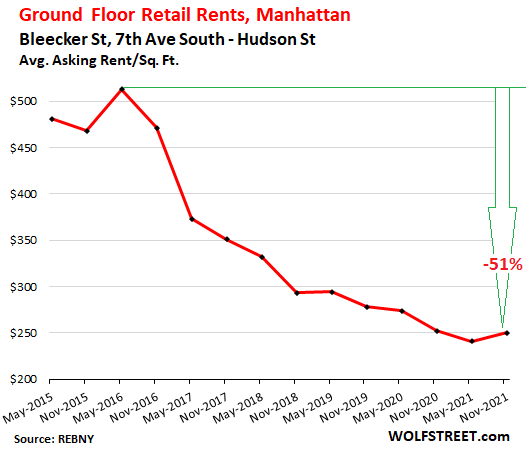 On Broadway between 72nd Street and 86th Street, the average asking rent ticked up over the past six months to$241/sf, roughly flat year-over-year, and down 38% from 2015. There were 24 availabilities: 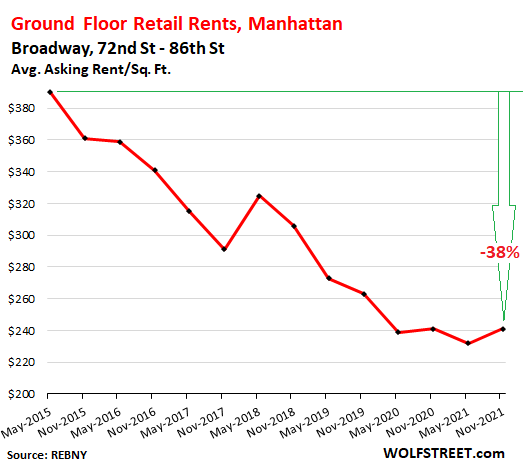 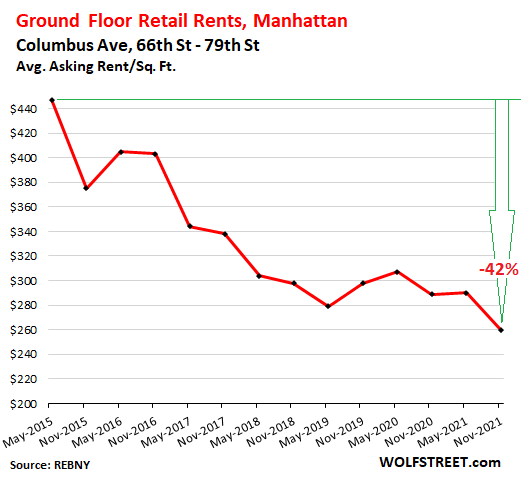 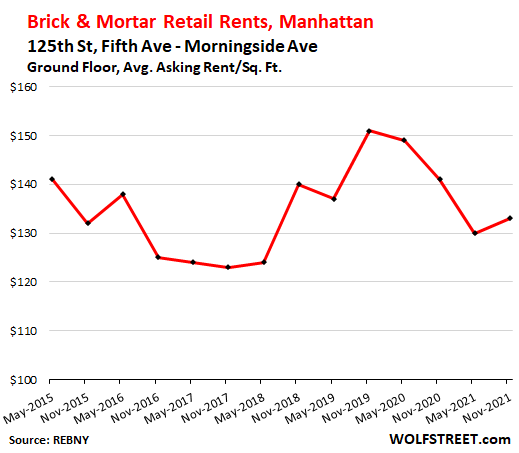