Total sales down from a year ago for the 4th month in a row.

Sales of existing homes of all types – houses, condos, and co-ops – in November ticked up from October, but fell 2% from November last year, to a seasonally adjusted annual rate of 6.46 million homes, the fourth month in a row of year-over-year declines, amid tight supply, according to data from the National Association of Realtors today (historic data via YCharts): 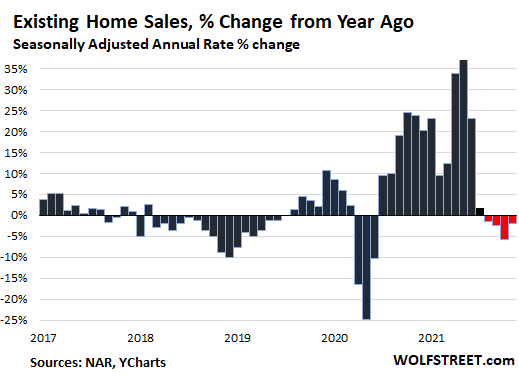 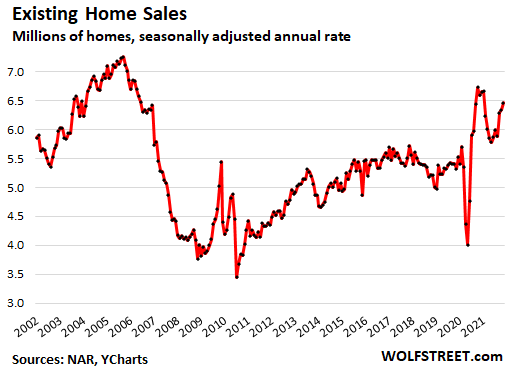 Rising mortgage rates. Part of the impetus to buy despite tight supply and ridiculous prices is the prospect of higher mortgage rates that is motivating people to try to lock in a mortgage at the current rate, no matter what the price of the home.

Buying a home “now” to lock in a lower mortgage rate is a classic reaction to rising mortgage rates, also promoted by the real estate industry. This occurs early on in the rate-hike cycle, and then after rates rise to some pain level, sales volume dries up.

Mortgage rates have risen even though the Fed is still engaging in QE (though it has cut the amount of QE and will end it entirely by mid-March) and has not yet raised its policy rates, though rate hikes are on the table for next year: 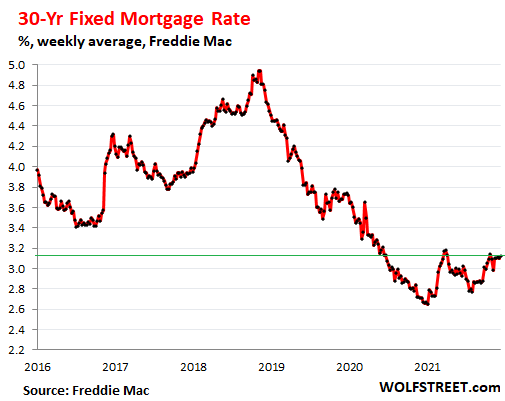 The median price, at $353,900, was unchanged from October and up 13.9% year-over-year. The year-over-year price spike had peaked in May and June at over 23%. Since June, the median price has dipped 2.5%, as seasonality has returned to the housing market. 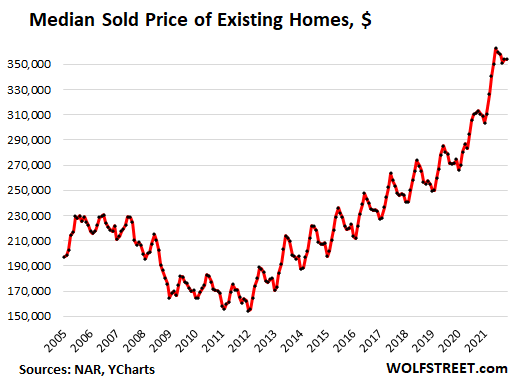 This 4.4% increase is now below the 6.8% inflation, as measured by CPI. The chart shows the year-over-year price changes of houses (green) versus condos (red). 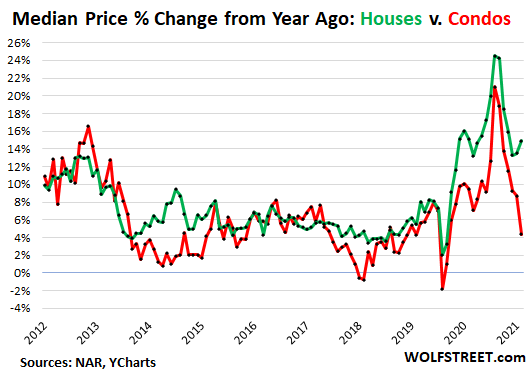 Supply of homes listed for sale declined to 2.1 months at the current rate of sales. The number of unsold homes on the market declined to 1.11 million homes, seasonally adjusted.

Supply is low not because there aren’t enough houses and condos, but because many people have bought new homes without selling their old homes, and they have bought homes as investments, and many of these homes are sitting vacant, with their owners trying to ride up the price spike all the way before selling them. When vacant homes become an investment like stocks or bonds because prices surge way beyond the carrying costs, following ferocious money-printing and interest-rate repression, then this is what you get. But those vacant homes that are not on the market can appear on the market in no time. 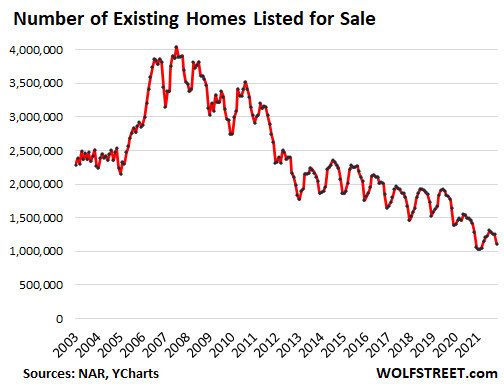 First-time buyers go on buyer’s strike. Home sales to first time buyers amounted to only 26% of total sales in November, down from 29% in October, and from 32% in November last year.

But investors pile in. All-cash sales accounted for 24% of total sales in November, same as in October, and up from 20% a year ago. Cash buyers include institutional investors that borrow at the institutional level and individual investors and second-third-fourth-home buyers that have the cash, or temporarily borrowed against their portfolios to obtain a mortgage later.