Stock markets closed at 1 p.m. today, and there wasn’t enough time to rectify this evil situation that has emerged on Black Friday, when stocks were supposed to be meandering higher on very low volume, driven by a few algos that would make sure stocks meandered higher to easily book another winning day and a new record high for the S&P 500 to keep the hype going.

But the sellers had arrived overnight while the buyers suddenly weren’t super-interested at buying at these ridiculously inflated record prices after the largest and fastest money printing scheme ever. And voilà. What everyone knew would happen someday, happened on this Red Friday, and stocks swooned.

And already the crybabies on Wall Street have come out in force, clamoring for the Fed to end the tapering of its asset purchases, and to push out the expected interest rate hikes into distant infinity, and to maybe even re-start QE all over again before they even ended it, because, you know, stocks aren’t ever allowed to drop, not even a little bit off their ridiculously inflated highs.

But the Fed, unlike before, has bigger worries for the first time in four decades – and Powell and Brainard, along with just about every other Fed governor have acknowledged it: Raging consumer price inflation that has now spread broadly across and deeply into the economy, filtering into services such as rents that are unrelated to transportation mayhem and production shortfalls in Asia. Rents, accounting for about one-third of CPI, are just now getting started to flex their muscles in the inflation indices. And the mood of consumers has soured.

This comes along with large-scale and widespread wage increases amid massive “labor shortages,” as workers have refused to return to work at current wages, and this combination will provide further upward pressure on wages.

And there isn’t any reason anymore to think that this raging inflation will stop raging on its own while the Fed still has the foot nearly fully on the money-printing accelerator and fully on the interest-rate repression lever.

And this raging inflation has become a political bitch for the White House, and they’re now acknowledging it, and they got the Fed to acknowledge it, and no one can brush it off anymore.

So now, we’ve got this bizarre situation where stocks – despite huge money-printing still going on, currently at $105 billion from mid-November through mid-December – actually fell today, with the three major indices down by over 2.2%, and the Russell 2000 by 3.7%. I mean, it’s just outrageous that this is allowed to even happen.

It’s interesting what is down the most, among the big companies in the DOW Industrial Average. Note the finance & insurance giants among the losers of the DOW components, along with some industrial giants, and Apple, to make for a pretty good mix:

The biggest losers among the S&P 500 were travel related stocks, including the three major cruise lines – given the renewed threat of international travel bans following revelations of a new Covid variant again – along with oil company APA:

Among the biggest losers on the Nasdaq was a little bit of everything, from travel to cannabis. The #1 loser, Longeveron, is a tiny biotech startup with essentially no revenues that went public earlier this year at $10 a share and by November 17 had dropped to $2.90 a share, and then spiked, including more than doubling on Wednesday before Thanksgiving, to $42.30 a share, and  then today plunged 27.5% to $30.67 a share, back to where it had first been on Monday. I mean, OK, folks gotta have some fun.

But airline stocks, after reaching pre-pandemic levels in the spring this year, have been selling off ever since, and today’s 7.7% drop of the WOLF STREET Airline Index was just an extension: 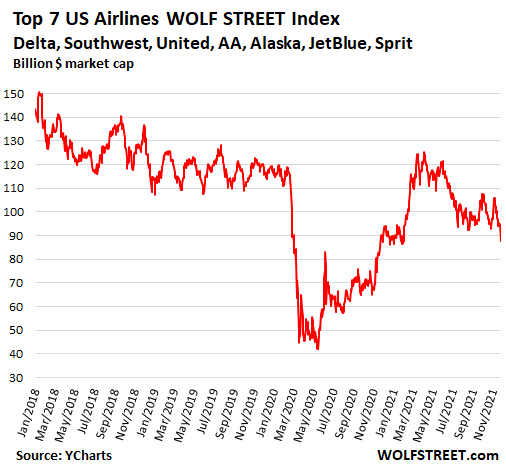 So the clamoring by the crybabies on Wall Street for relief from the Fed to soothe this insufferable pain of markets dropping a little from their ridiculously inflated levels is just hilarious, and provides great amusement on this Black Friday when people are supposed to try to prop up the economy by splurging with borrowed money on imports from Asia.

215 comments for “Red Friday: A Little Dip and Already the Crybabies on Wall Street are Clamoring for the Fed to Soothe their Pain”