But the Fed has now backed off its ridiculous claims and is taking inflation more seriously.

The lowest lowball inflation measure that the US government produces, “core PCE,” which excludes the now soaring food and energy prices and understates inflation by the most, is used by the Fed for its inflation target: a symmetrical 2% “core PCE.” And this core PCE in October, released today by the Bureau of Economic Analysis, spiked by 4.1%, more than twice the Fed’s inflation target, and the worst-hottest inflation reading since January 1991: 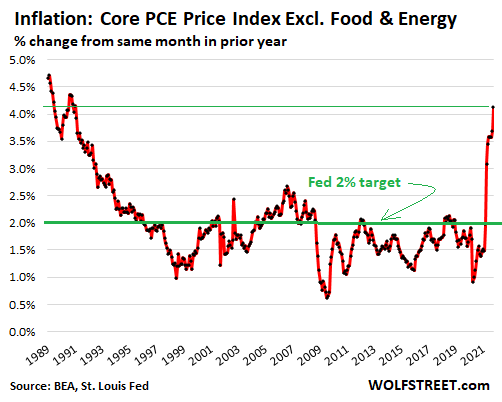 It’s not temporary, Fed Chair Jerome Powell groaned and muttered this morning upon seeing this inflation monster blow out, following his $4.5 trillion in money-printing in 21 months. Here he is, freshly re-nominated for another four years, viewing the problem of his own making that he will now have to deal with, by cartoonist Marco Ricolli for WOLF STREET:

The overall PCE inflation index that includes food and energy, the second-lowest lowball inflation measure the US government produces, spiked by 5.0% in October, the worst-hottest since November 1990: 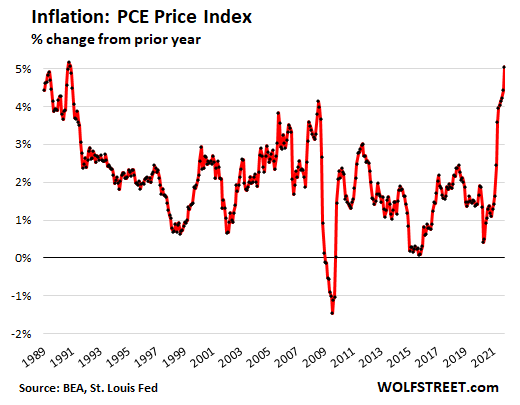 There is hardly anyone left on Wall Street with professional experience in this kind of inflation.

And the Fed still has the foot on the gas, but just slightly less so, planning to print $105 billion from mid-November through mid-December to repress long-term rates, and it’s still repressing short-term rates to near-zero – blowing at nearly full speed through every red light at every intersection.

On a month-to-month basis, the overall PCE increased by 0.43% in October from September, the worst-hottest increase since May. This amounts to an annualized pace of 5.2% (12 x 0.43%).

If you think that a car will slow down on its own somehow when you floor the accelerator, you’re tragically mistaken, as the history of automotive accidents shows.

Despite my assurances since early this year that inflation was heating up and that it wouldn’t be temporary for a variety of reasons, including that the entire inflation mindset of consumers and businesses had changed, the Fed at first claimed that it was due to the “base effect” and would go away on its own this year, then when inflation outran the base effect, it claimed until that this was just “temporary” or “transitory,” and then, when inflation outran temporary and transitory, and continued to spike, the Fed changed the definition of temporary and transitory.

But even the Fed has now backed off these ridiculous claims, and is taking inflation more seriously.

Following the re-nomination of Powell and the promotion of Brainard, they both elevated inflation to their Number 1 Priority in their thank-you statements.

Even ultra-dove San Francisco Fed president Mary Daly has now conceded that she’d be open to speeding up the tapering of asset purchases in December. Another dove, Jim Bullard has turned into a hawk, calling for faster taper, sooner balance sheet runoff, and sooner rate hikes. Even the doves see where this is going, with inflation spiking and the Fed’s foot still fully on the money-printing and interest-rate repression accelerator – and they don’t really want to go there.