After 13 years with on average negative real returns to savings, it is time to require the Fed to address its impact on savers.

By Alex J. Pollock, Senior Fellow at the Mises Institute.

With inflation running at over 6 percent and interest rates on savings near zero, the Federal Reserve is delivering a negative 6 percent real (inflation-adjusted) return on trillions of dollars in savings. This is effectively expropriating American savers’ nest eggs at the rate of 6 percent a year.

It is not only a problem in 2021, however, but an ongoing monetary policy problem of long standing. The Fed has been delivering negative real returns on savings for more than a decade. It should be discussing with the legislature what it thinks about this outcome and its impacts on savers.

The effects of central bank monetary actions pervade society and transfer wealth among various groups of people — a political action. Monetary policies can cause consumer price inflations, like we now have, and asset price inflations, like those we have in equities, bonds, houses, and cryptocurrencies. They can feed bubbles, which turn into busts. They can by negative real yields push savers into equities, junk bonds, houses, and cryptocurrencies, temporarily inflating prices further while substantially increasing risk. They can take money away from conservative savers to subsidize leveraged speculators, thus encouraging speculation. They can transfer wealth from the people to the government by the inflation tax. They can punish thrift, prudence, and self-reliance.

Savings are essential to long-term economic progress and to personal and family financial well-being and responsibility. However, the Federal Reserve’s policies, and those of the government in general, have subsidized and emphasized the expansion of debt, and unfortunately appear to have forgotten savings. The original theorists of the savings and loan movement, to their credit, were clear that first you had “savings,” to make possible the “loans.” Our current unbalanced policy could be described, instead of “savings and loans,” as “loans and loans.”

As one immediate step, Congress should require the Federal Reserve to provide a formal savers impact analysis as a regular part of its Humphrey-Hawkins reports on monetary policy and targets. This savers impact analysis should quantify, discuss, and project for the future the effects of the Fed’s policies on savings and savers, so that these effects can be explicitly and fairly considered along with the other relevant factors.

The critical questions include: What impact is Fed monetary policy having on savers? Who is affected? How will the Fed’s plans for monetary policy affect savings and savers going forward?

Consumer price inflation year over year as of October 2021 is running, as we are painfully aware, at 6.2 percent. For the ten months of 2021 year-to-date, the pace is even worse than that—an annualized inflation rate of 7.5 percent.

Facing that inflation, what yields are savers of all kinds, but notably including retired people and savers of modest means, getting on their savings? Basically nothing.

I estimate, as shown in the table below, that monetary policy since 2008 has cost American savers about $4 trillion.

The table assumes savers can invest in six-month Treasury bills, then subtracts from their average interest rate the matching inflation rate, giving the real interest rate to the savers. This is on average quite negative for these years. I calculate the amount of savings effectively expropriated by negative real rates. Then I compare the actual real interest rates to an estimate of the normal real interest rate for each year, based on the fifty-year average of real rates from 1958 to 2007. This gives us the gap the Federal Reserve has created between the actual real rates over the years since 2008 and what would have been historically normal rates. This gap is multiplied by household savings, which shows us by arithmetic the total gap in dollars. 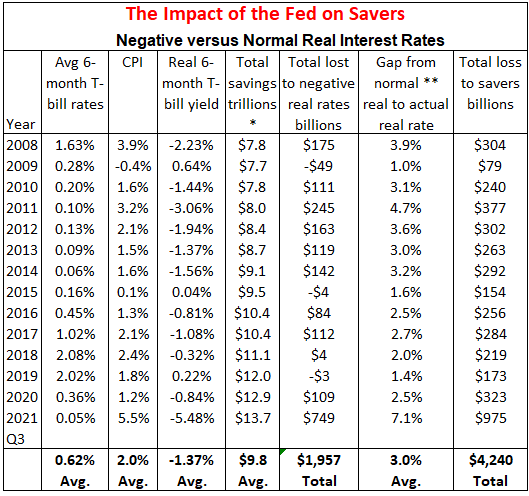 To repeat the answer: a $4 trillion hit to savers.

The Federal Reserve through a regular savers impact analysis should be having substantive discussions with Congress about how its monetary policy is affecting savings, what the resulting real returns to savers are, who the resulting winners and losers are, what the alternatives are, and how its plans will impact savers going forward.

After thirteen years with on average negative real returns to conservative savings, it is time to require the Federal Reserve to address its impact on savers. By Alex J. Pollock, Senior Fellow at the Mises Institute.

176 comments for “Since 2008, Monetary Policy Has Cost American Savers about $4 Trillion”