Sales of existing homes of all types – single-family houses, condos, and co-ops – were down 2.3% year-over-year in September, the second month in a row of year-over-year declines, and were down 6.5% from the peak in October last year, according to data from the National Association of Realtors today. But compared to the prior month, sales rose 7.0% to a “seasonally adjusted annual rate” of sales of 6.29 million homes (historic data in the chart via YCharts). 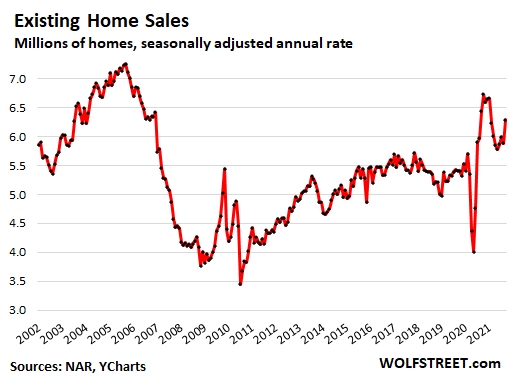 Condo sales, at a seasonally adjusted annual rate of 700,000 condos, were still up 4.5% from last year, but it was the smallest year-over-year gain since June 2020.

The chart below of year-over-year percentage changes in total sales shows the blistering boom in home sales last year and earlier this year, and how this boom in sales has now lost steam: 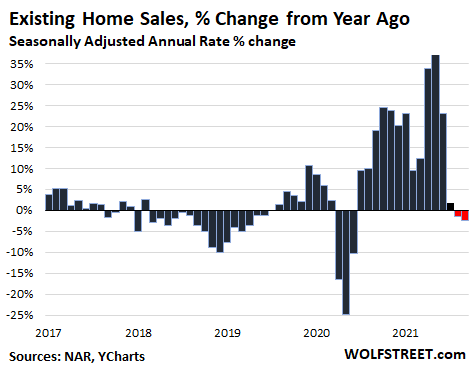 Fear of higher mortgage rates. There is a well-established phenomenon at work. According to Freddie Mac, the average 30-year fixed-rate mortgage in mid-August came with a rate of 2.87%, and at the end of September with a rate of 3.01%. In the latest reporting week, released today, the rate rose to 3.09%.

During the early phases of rising-rates, such as now, buyers try to lock in a rate before they rise even more, which leads to a rush in home sales that then turns into a decline as rates rise further. But even with this rush, sales were still down 2.3% from a year ago.

This will be particularly interesting this time around since prices have shot up so far so fast last year and earlier this year that even small increases from the record-low mortgage rates will put even more affordability pressures on the market, and sap some demand.

The median price fell for the third month in a row in September from August, to $352,800 for all types of existing homes combined.

Declining prices in September are not unusual. But last year, seasonally was totally upended when prices spiked no matter what, as you can see in the chart below. Reverting to seasonality is the first step back from craziness toward what is now called “normalization” or “deceleration.”

This price decline further reduced the year-over-year price gains for all homes combined to 13.3%, down from a year-over-year gain of 23.6% during peak-frenzy in May.

Maybe Zillow, when it decided to stop buying houses for its flipping business, saw something in its massive pile of data: algo-driven house flipping is a lot harder when the frenzy is gone, and when it bought many of those homes at peak prices (historic data via YCharts): 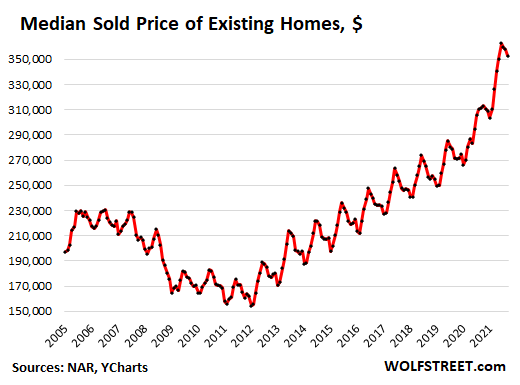 New listings normally peak in May and then drop off through December or January, after which they begin to rise again. The pandemic has totally upended any seasonality last year. This year, new listings rose from very low levels in December through June, flattened in July, and started dropping in August and September. The green line indicates the movements between Septembers (data via realtor.com residential listings database): 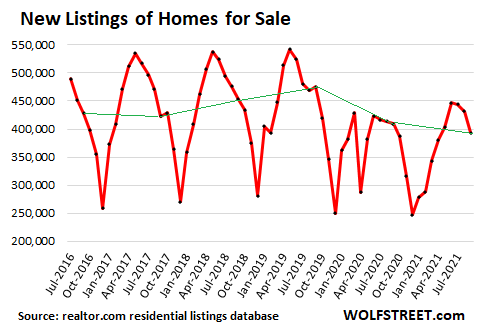 Supply of unsold homes on the market dipped to 2.4 months, and homes for sale dipped to 1.27 million homes (seasonally adjusted), as inventory for sale remains low, but has come up some this year (historic data via YCharts): 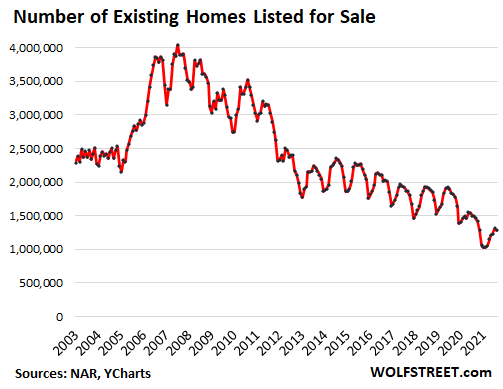 The share of all-cash sales rose to 23% of total sales in September, but roughly in the same range as during the summer. Cash buyers include institutional investors that can borrow at the institutional level, plus individual investors and second home buyers that have the cash, or can temporarily borrow against their portfolio and get a mortgage later.

The share of sales to individual investors and second-home buyers dipped to 13% in September, from 15% in August.

Mortgage rates rose as the 10-year Treasury yield jumped. The Fed has now made clear that it will taper its asset purchases after the FOMC meeting in November, and end QE entirely by mid-2022. There are already Fed governors that are considering to speed up the pace of tapering to make room for sooner rate hikes.

The $120 billion a month in QE, which includes $40 billion a month in mortgage-backed securities, was designed to repress long-term interest rates, including mortgage rates, in a massive manipulation of the credit markets. And the end of QE, with the single biggest relentless and predictable buyer gone, will give credit markets a bit more leeway to respond to surging inflation with higher yields.

The 10-year Treasury yield has surged by over 60 basis points since early August, to 1.67% at the moment. Mortgage rates, which generally lag Treasury yields, have risen 32 basis points since early August, to 3.09%, according to Freddie Mac’s data released today. But as you can see, mortgage rates remain extremely low, with a lot of room left to rise, and the Fed hasn’t started the rate-hike cycle yet: 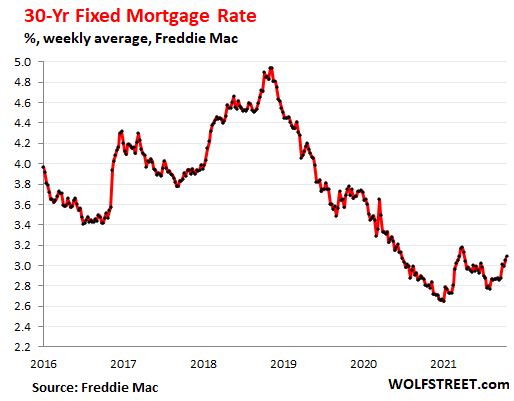 99 comments for “Fear of Rising Mortgage Rates Meets Fizzling Pandemic-Frenzy? Prices of Existing Homes Fall for 3rd Month. But, But, But…”