Even as American leisure travelers have been out in force, for US hotels, the all-important and lucrative business travel revenues – corporate, group, government, and other commercial travel – are expected to be down by $59 billion in 2021 from 2019, according to the American Hotel and Lodging Association (AHLA) and Kalibri Labs today.

The largest destination, the New York City metro, is expected to see an 88% collapse in annual hotel business travel revenues, from $4.6 billion in 2019 to a projected $531 million in 2021.

These are the largest 20 destinations by business travel hotel revenues in 2019, the projected year-total revenues for 2021, and the percentage difference:

The fifth largest destination in the table above, San Francisco, is expected to see a 93% collapse in hotel business travel revenues, from $2.5 billion in 2019 to $178 million in 2021, according to AHLA.

At the Moscone Center, San Francisco’s convention center, there was hardly anything scheduled for the rest of the year to begin with – just four events. At least one of them, the 64th Annual International Auto Show in November, has already been cancelled.

Another, the 76th Annual Meeting of the ASSH (American Society for Surgery of the Head) is still scheduled for September 30 through October 2, but with a “stream-lined schedule” and an “online attendance option.”

The Cannabis Business Summit & Expo 2021 was supposed to take place in early August but was rescheduled for mid-December, and everyone is keeping their fingers crossed.

The SEMICON WEST conference and the Design Automation Conference (DAC) were supposed to take place jointly in February this year but were rescheduled for December.

So some conferences are starting to show up, and it appears they’re going to take place, but potential attendees are reluctant and organizers are leery.

This is the situation everywhere. Conference organizers are trying to get people together and put some souls into the vast convention centers, and they’re doing it, but it’s hard and slow.

The reluctance among businesses about sending employees to conferences and about even holding conferences is also reflected in still dismally low office attendance.

Across the US, companies had sill not returned in large numbers to the office, and official return-to-the-office dates announced by big companies – whatever format that return to the office would have taken, from 1 day a week to 5 days a week bell-to-bell – keeps getting pushed out.

Office occupancy, as measured by workers actually showing up at the office, struggled to recover from dreadfully low levels, but over the past two months has relapsed. According to Kastle Systems, the 10-city average has dropped to 31% of where it had been before the pandemic, meaning it’s down 69% from the Good Times: 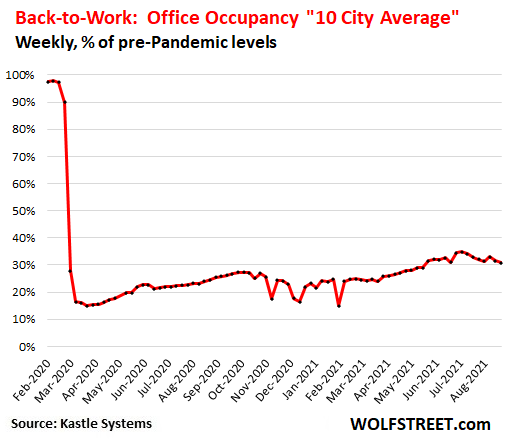 The longer business travel and office occupancy are getting replaced by video calls and working from home, and the more people figure out how to make it work and be productive, and the more they adjust their lives around it, the harder it will be to ever return to the Old Normal.

Some of this business travel and some of this office occupancy will certainly return, but it is becoming increasingly doubtful that the Old Normal was even such a great idea to begin with, and there are now initiatives underway all around to figure out what some kind of new normal might look like.

82 comments for “Business Travel, Conventions, Office Occupancy Stuck in Collapse: Been so Long, People Forgot What Old Normal Was”