The Fed keeps discussing consumer inflation expectations as one of the key metrics in assessing the path of inflation in the coming years. Inflation expectations suggest to what extent consumers might be willing to accept price increases, thereby enabling inflation. Consumer price inflation is thought to be in part a psychological phenomenon, similar to market prices. When the inflationary mindset takes over, consumers accept higher prices instead of going on buyers’ strike as they infamously did with new cars in 2008 through 2013, when demand collapsed and stayed down for years.

Consumers’ median inflation expectations for one year from now jumped to 5.2% in August (red line), the highest in the survey data going back to 2013, and the 10th monthly increase in a row, according to the New York Fed’s Survey of Consumer Expectations today. The survey also tracks consumers’ expectations of their earnings growth. And that combo became a hoot (more on that in a moment).

Inflation expectations for three years from now jumped to 4.0% (green line), the highest in the survey data. People are starting to blow off the Fed’s endless sermons about this inflation being “temporary” or “transitory.” 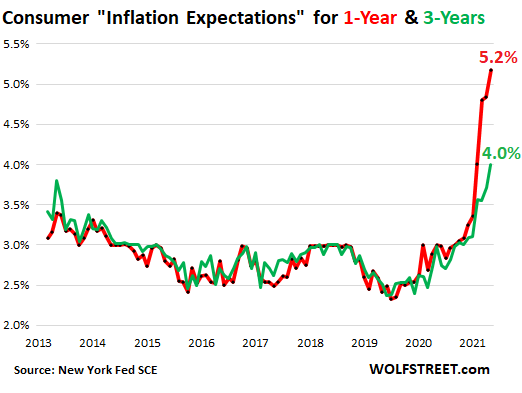 The people who went through the last bout of massive inflation as adults in the 1970s and early 1980s, the people who have actual experience with large-scale inflation and remember what it was like – the over 60 crowd – they expect inflation to hit 6.0% a year from now (red line in the chart below). 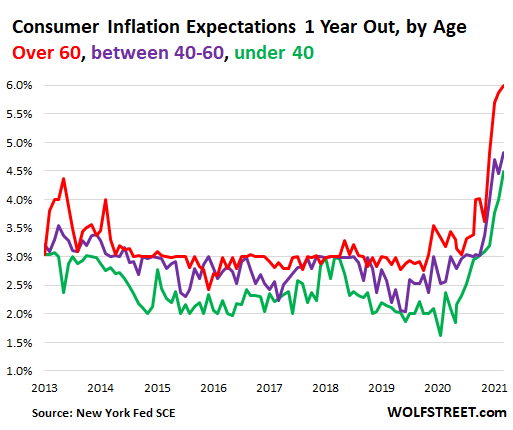 The inflation expectation are actually worse.

Interestingly, consumers expect much higher inflation rates in the items where they spend most of their money – housing, food, gasoline, healthcare, and education – than what they expect for the overall inflation rate.

Just looking at these categories, and given their dominant weight in the CPI basket (housing costs alone, not including utilities, are one-third), it would seem that consumers expect inflation one year from now to be over 7% based on these categories, not 5.2%:

Inflation is expected to whack earnings.

Consumers expect their earnings in a year from now to be only 2.5% higher than today (purple line), down from 2.9% a month ago; But they expect overall prices to be 5.2% higher (red line). In other words, consumers expect inflation to increase at over the double the rate as their earnings. And that’s not fun. 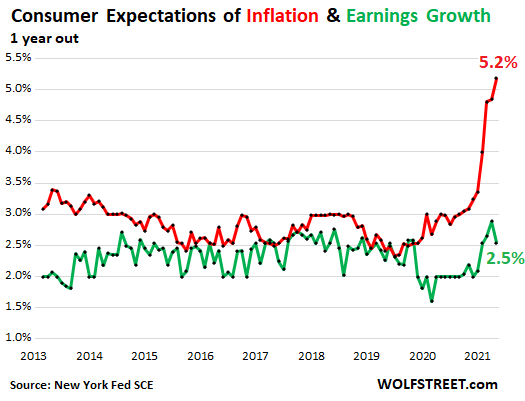 If these expectations of big price increases and small income increases pan out, it’s going to be miserable for consumers at the bottom half of the income scale who spend all of the little money they make. But wealthy consumers, topped off by the coddled billionaire class, will be fine.

These inflation dynamics are taking place even as the Fed is still stimulating the economy with its 0% interest rate policy and $120 billion a month in QE, on top of the stimulative effects of the massive deficit spending by the government.

The Fed is approaching the point where it will dial back QE, but the balance sheet will remain bloated for a while, short-term rates are going to remain at near 0% for a while, and the government continues massive deficit spending for a while. So stimulus will continue, though at a slightly less massive blowout historic extravagant pace than today.

It’s totally unclear to me, and increasingly to consumers as a whole, why this inflation should be “temporary,” given that the factors that produced it – the most monstrously overstimulated economy ever – are still fully in effect and will remain so for a while.

170 comments for “Americans Expect their Earnings to Get Whacked by Red-Hot Inflation, Blow Off Fed’s Sermons about “Temporary””