And as the Fed pumps out cash via QE on one side, it mops up $1 trillion in cash via reverse repos on the other.

The $1.1-trillion tsunami of liquidity that has washed over the land starting in February through the drawdown of Treasury General Account (TGA) has just about run its course and is now petering out.

As of the Fed’s balance sheet for the period ended August 4, the TGA – the government’s checking account at the Federal Reserve Bank of New York – fell by another $31 billion from the prior week, and by $219 billion for the four-week period, to $506 billion.

The Yellen Treasury announced in January that it would draw down this account from $1.6 trillion at the time to $500 billion by this summer. And we’ve arrived: 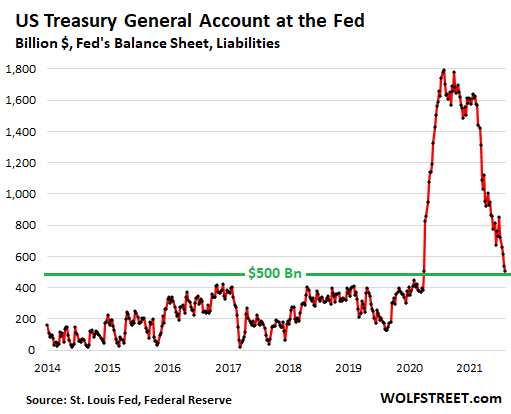 To accomplish this drawdown, the Treasury, which is spending money hand over fist, raised less money in new debt, particularly in short-term Treasury bills, and made up the funding shortfall by drawing down its checking account, the TGA.

This drawdown has caused $1.1 trillion in cash to flow from the TGA into the economy and thereby into the financial system between February 2021 and now.

The situation originated in the spring 2020, when the Treasury Department issued $3 trillion in new debt to pay for the stimulus and bailout programs, and when the Fed bought $3 trillion in securities to monetize this new debt so that the market didn’t have to absorb it.

However, the government didn’t spend the $3 trillion it had raised, and the unspent amounts remained in the TGA, peaked at $1.8 trillion in July 2020, and by the end of the year was still at $1.6 trillion.

The purposeful drawdown of the TGA ends when the account reaches $500 billion, which is about now. Going forward, the account balance will fluctuate, as checking accounts do, but it should largely remain around $500 billion.

The $1.1 trillion tsunami of liquidity made its way from the TGA and the Fed’s books (where the TGA is a liability) into the financial system and caused all kinds of issues in the money markets where interest rates began to drop below 0% as all this cash was trying to find a place to go. Even 30-day Treasury bills were trading at 0% or below 0% by early June.

This is when the Fed started mopping up extra cash via its overnight “reverse repos” (RRP). At first, the Fed’s offering rate for overnight RRPs was 0% interest. On June 16, it raised the interest it is paying by five basis points to 0.05% (annualized rate). This triggered a flood of cash, mostly by money market funds, to be handed to the Fed via RRPs, and these RRPs have now been at around $1 trillion for over a month.

On Friday, the Fed sold $952 billion in overnight – well, through Monday morning – reverse repos to 68 counterparties. These counterparties have mostly been money market funds. In other words, they handed the Fed $952 billion in cash and obtained securities from the Fed for that amount, to earn an annual rate of 0.05% interest on that $952 billion.

Those reverse repos will mature and unwind Monday morning, and there will be new repos in a different amount that will unwind on Tuesday. 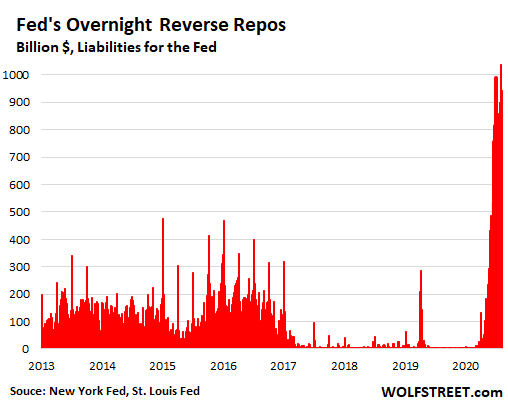 Reverse repos do the opposite of QE: They absorb cash as the Fed sells Treasury securities for cash, and removes that cash from the financial system. With RRPs fluctuating at around $1 trillion, the Fed has undone over eight months of QE, at $120 billion per month.

Either way of looking at it, the RRPs have been a giant sucking sound of cash. One of the effects, with the offering rate of 0.05%, is that short-term interest rates have risen from 0% or below 0% in early June to around 0.05% now, including 30-day Treasury bills and the Secured Overnight Financing Rate (SOFR, the newfangled Libor replacement).

For money market funds, banks, and other financial institutions that handed the Fed this $1 trillion via RRPs, the 0.05% interest that the Fed pays them amounts to an interest income of $1.4 million per 24-hour period. Over the weekend, all together, they made about $4 million in interest income on the $952 billion in RRPs. If they do this for a whole year, it would amount to $500 million in risk-free interest income.

201 comments for “$1.1 Trillion Flood of Liquidity from Drawdown of Treasury General Account Peters Out”