No one wants consumers to pay off their high-interest credit cards, least of all banks, and consumers had threatened to do just that.

The last round of stimulus checks started going out in March, and people continued to receive them in waves, and used them to drive retail sales to fabulous records in March and April. But in May, the magic was starting to fade. And May is when consumers dipped into their credit cards again.

Credit card debt and other revolving credit, such as personal lines of credit, ticked up by $9 billion, or by 1.0% in May from April, seasonally adjusted, according to the Federal Reserve this afternoon. As measly as this uptick was, it was the first major increase since February 2020, and the largest percentage increase since December 2019. This followed many months during which consumers had paid down their credit cards.

The balance rose to $975 billion (seasonally adjusted), still down by nearly 11% from the peak in December 2019, and down by 2.3% from a year ago. Can you see that little relief-uptick that the financial media made such a big deal out of? 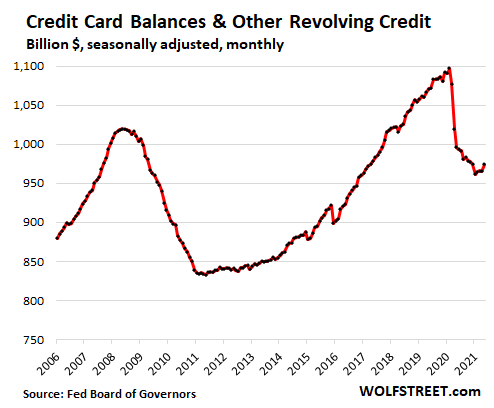 This 1% month-to-month uptick triggered phenomenal excitement in the media about renewed borrowing by consumers, and not just any old borrowing but the most expensive form of borrowing for consumers, and the most profitable for banks, at usurious interest rates often over 20%, and sometimes over 30%, charged by the same banks that pay near-0% on savings accounts.

This uptick caused a lot of relief, especially at the Federal Reserve, because no one wants consumers to pay down their high-interest-rate credit cards, and consumers had threatened to do just that.

It’s clear that this one small step for consumers was a giant leap for mankind, the way it sounded in the financial media, because American debt-slaves must forever shoulder usurious interest rates to fund the all-important American consumer spending and to fatten up the banks – according to the consensus opinion of economists polled by Reuters, or whatever.

Total consumer Credit – what consumers owe on their credit cards, auto loans, student loans, but not mortgages – rose by $35 billion in May from June, or by 0.8%, seasonally adjusted, the largest month-to-month increase since March 2016, to $4.28 trillion.

March, April, and May each had set a new record on a seasonally adjusted basis. Year-over-year, consumer credit was up 1.1% in May, after having pulled even in April.

The exciting things about this chart are the three jags: In 2010 and 2015 due to the five-year adjustments by the Census Bureau of the underlying population data used by the Federal Reserve; and in early 2020 due to the plunge in credit card balances as consumers paid them down with their stimulus money (see above chart): 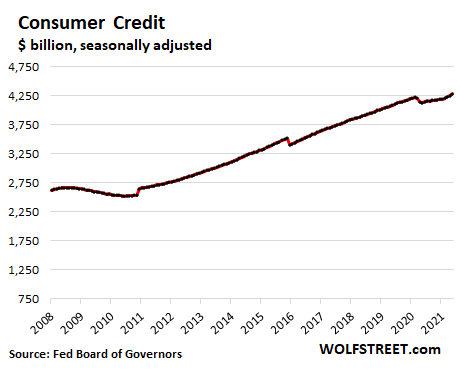 The Federal Reserve releases the details of auto loans and student loans on a quarterly basis, and so we have to be patient for another month.

But both auto loans and student loans combined form the vast majority of the “nonrevolving credit” portion of consumer credit. This nonrevolving credit increased by 0.8% in May from April, seasonally adjusted, the largest increase since, well January, and was up by 5.6% year-over-year, the largest increase since August 2017, to a new record of $3.3 trillion.

Back in Q1, student loans amounted to $1.73 trillion and auto loans to $1.24 trillion. According to reports by Equifax, auto loans have jumped in Q2, and we know student loans always jump, particularly now because people are still taking out student loans, but no one is paying them down anymore because they have all been enrolled in forbearance. So when the detailed data for Q2 emerges we should see a satisfying jump.

155 comments for “With Stimmies Fading, Consumers Dip into Credit Cards for First Time since 2019, But Only a Little. Everyone’s Relieved”