How the “Wealth Effect” benefits Americans individually: Peanuts & extra costs for the bottom 50%, wealth for the top 10%, billions for the few.

The Fed released its data on the wealth distribution through Q1 2021 today. It’s a testimony of the effectiveness of the Fed’s monetary policies in expanding the already unimaginably huge wealth disparity in America. The Fed’s data covers household wealth of the 1%, the next 9%, the next 40%, and the bottom 50%. The bottom 50% – half of the US population – are the have-nots and don’t even register on my “Per Household Wealth Effect Monitor” because they don’t have enough. 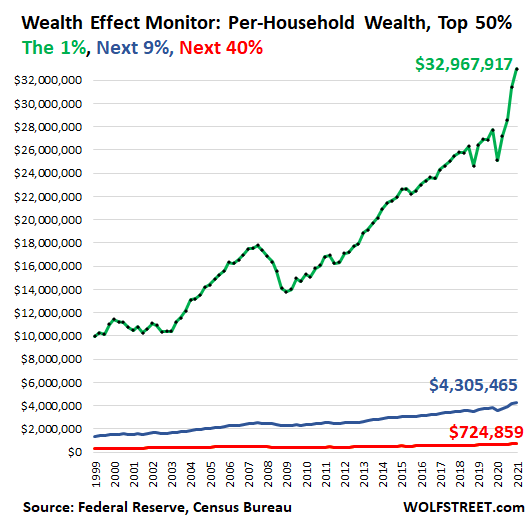 The 1% are spread across an enormous spectrum of wealth.

At the top are the 30 wealthiest American households, ranging from Bezos to Icahn, with Musk as #2. Combined, the 30 households have a wealth of $2.0 trillion, per Bloomberg Billionaires Index, with an average wealth per household of $67 billion. They’re the total hands-down-winners from the Fed’s monetary policies.

The bottom 50% are the have-nots in a universe of Fed-created wealth that is not for them.

The bottom 50% own essentially no stocks. And only a small portion of them own real estate, and they have very little equity in the real estate they own. But they have a lot of debts. The bottom 50% are not only bypassed by the Fed’s Wealth Effect – they have to pay for it in terms of higher costs.

Their average wealth of $42,000 per household includes durable goods, such as their cars and TVs and washing machines and cellphones. Their wealth gained just $10,000 over the past 12 months, much of it not from the Fed but from the government’s stimulus money, which they saved, paid down their credit cards with, or spent including on durable goods.

Among the bottom 50%, there are also large differences. At the top end are households perhaps with a modest house weighed down by a big mortgage they can barely pay for, a small 401k, plus nice cars and other durable goods, minus auto loans, student loans, and credit card debt. Those are the lucky ones among the bottom 50%. But that category also includes the poorest of the poor. 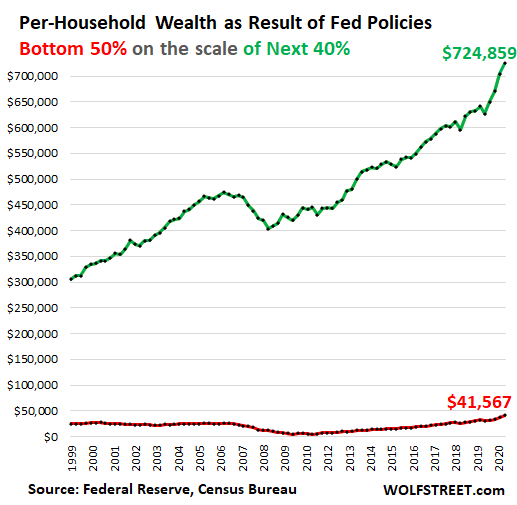 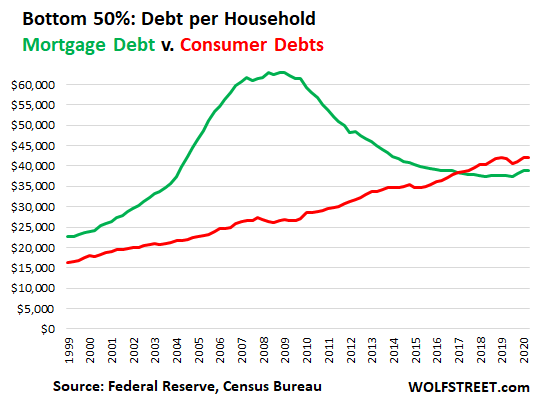 The bottom half own nearly no stocks and little real estate.

Real estate at the bottom 50% is the largest asset at $61,500 per household (black line in the chart below), with $39,000 of mortgage debt against it, for a home equity of $22,500. What this means is that relatively few households in the bottom 50% own real estate. On average, those households gained $3,000 on their real estate.

When the Fed’s Wealth Effect policies inflate the housing market, most people in the bottom 50% don’t benefit at all because they don’t own a home. But they’re paying for the Wealth Effect because their costs, including rents, are rising.

Durable goods are the second largest category at the bottom 50%, at $24,000 per household, such as vehicles, appliances, and cellphones (green line), up by $2,500 over the past 12 months as people used their stimmies from the government to buy cars and other things.

Stocks and mutual funds, the smallest category of the assets, amount to only $1,356 per household (red line). The bottom 50% cannot at all benefit from the Fed’s efforts to inflate the stock market. That’s reserved for the top 10%: 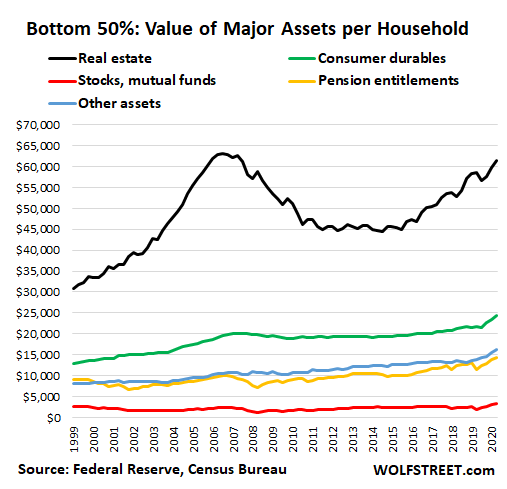 The Fed’s Wealth Effect is designed for the top 10%.

The doctrine of the “Wealth Effect” — make the wealthy even wealthier so that they spend a little more, the ultimate of trickle-down economics — has long formed the official foundation for the monetary policies of the Federal Reserve and has appeared in numerous Fed papers, including by Janet Yellen when she was president of the San Francisco Fed. In 2010, Ben Bernanke, as Chairman of the Fed, explained the concept to the American people in a Washington Post editorial. In March 2020, Fed Chair Jerome Powell, who wisely chose not to use the term “Wealth Effect” and instead came up with his own terms, took the wealth effect to the most fabulous level ever, as you can see with the green line in the first chart.

Over the past three decades, the wealth disparity between the 1% and the bottom 50% has multiplied by a factor of 6, from $5 million per household in 1990 to nearly $33 million now, with a huge chunk of it over the past 12 months, thanks to the Fed’s assiduous policies: 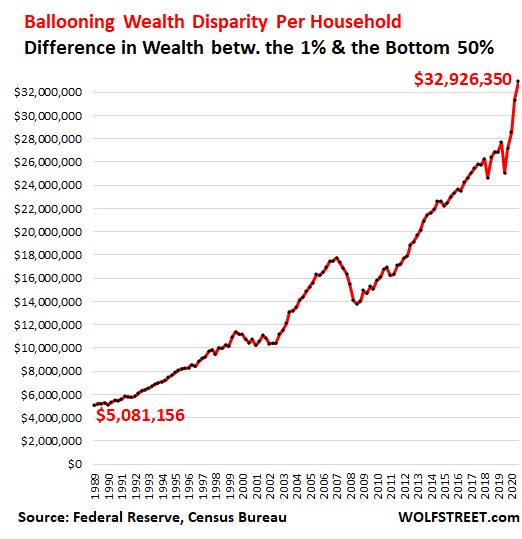 This is an astounding but totally-taken-for-granted and totally accepted result of the Fed’s monetary policies. No one is even allowed to question it. It’s accepted because the top 10% like it that way, including Members of Congress who could actually do something about it, and because the bottom 50% don’t know about it, and don’t understand what the Fed is doing to them, and are too busy trying to survive in this disparity nightmare.

266 comments for “Most Important Measure of Fed’s Economy: My “Per-Household Wealth Effect Monitor” for Q1, Based on Fed Data”