Investors may still be doing a lot of heavy breathing.

Whatever demand there may be from investors, demand from buyers needing a regular mortgage in order to buy a home continues to decline, and in the week ended May 28 fell 4.0% from the prior week, to the lowest level since May 2020 (when mortgage applications were coming out of the collapse of the prior weeks), according to the Mortgage Bankers Association today.

This put applications for mortgages to purchase a home roughly in the middle of the range of 2019, having worked off the entire Pandemic boom (the big drop and bounce-back in February was the result of snowmageddon; data via Investing.com): 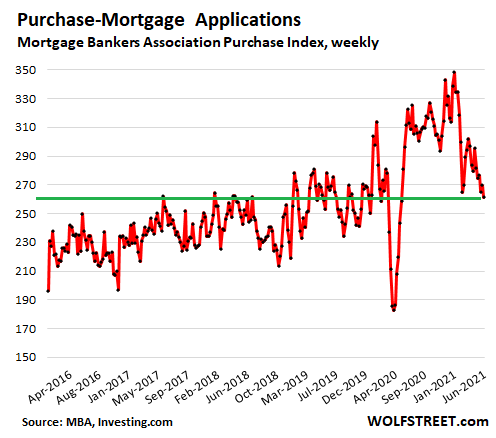 Out of homes to buy? Wait… inventories available for sale of existing homes, while still low, have been rising for months and in April reached the highest level since November, and supply rose to the highest since October, according to the National Association of Realtors two weeks ago.

The NAR also confirmed the decline in sales volume: sales of existing homes have been falling for months and in April hit their lowest level since July 2020, having worked off most of the Pandemic spike.

This comes as mortgage rates have ticked up a little from their record lows late last year, but remain near historic lows, with the average interest rate on 30-year fixed rate mortgages with conforming balances and a 20%-down-payment at 3.17%, according to the MBA this morning: 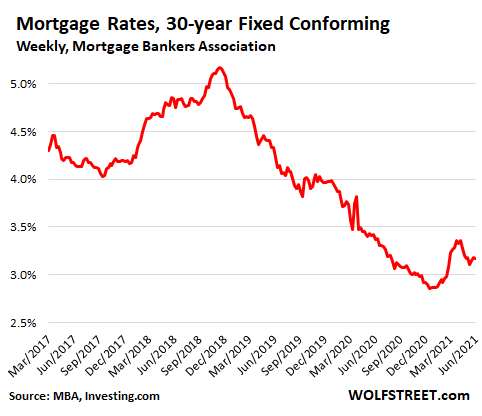 Mortgage applications to refinance existing mortgages have also worked off the Pandemic spike and have fallen below the year-ago-level.

But these refi applications remain over twice as high as in early 2019, when the average 30-year fixed rate mortgage carried an interest rate of a now unthinkably high 4.2%, though they’d been over an even more unthinkably high 5% in late 2018.

What would the housing market look like with mortgage rates at 5% and today’s sky-high prices? That was a rhetorical question. Back then, among the effects it had was that it calmed down refi activity by a lot: 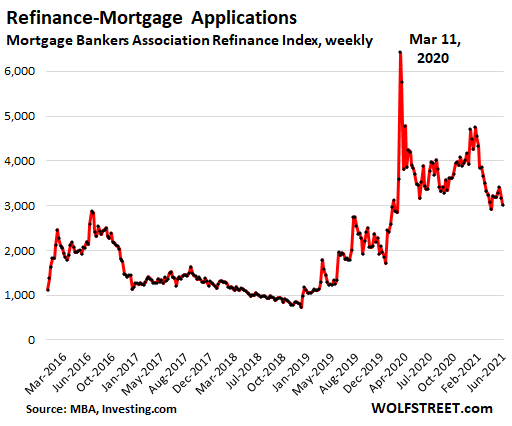 There are now a number of “obstacles,” as the MBA calls it, to home sales, the primary obstacle being sky-high prices, and by extension the affordable supply that has moved out of the affordability range of many potential buyers.

Then there is the possibility that the explosion in volume over the past 12 months, a form of panic buying, is now showing signs of getting exhausted, as many people who really wanted to buy bought, and enough potential buyers that are looking for a home to live in – rather than investors – took a deep breath and stepped back from the “raging mania” and the crazy bidding wars.

Investors are still reported to be out there in large numbers, and worrying even Fed officials. But enough regular home buyers may be staying away from the raging mania to where it has started to show up in the numbers.

158 comments for “Buyers’ Strike? Mortgage Applications Drop Deep into 2019 Range as People Looking for a Home to Live in Step Back from “Raging Mania””