“It’s impossible to know how many of these shuttered hotels and hostel will reopen.”

“After hitting rock bottom, we finally appear to be turning the corner. At this rate, by the end of May we may even break even for the month, for the first time since March last year,” says Pol. He and his two partners own Hostal Live Barcelona, a small two-floor hostel in the center of Barcelona that was closed for 12 months, from March 2020 through February 2021.

“We have no idea when, if ever, we’ll be able to rent the rooms at the sort of prices we were charging in 2018. But for now at least the worst appears to be behind us — barring another cataclysm,” he said.

It was touch and go for a while. The only reason Hostal Live is still a going concern is that Pol and his two partners had capital to draw upon when the virus crisis hit. That capital was supposed to be used to expand the business. Instead much of it was used to keep the business alive:

“As our bank manager told is in March, the only reason we qualified for an emergency loan is that we had no debt on our books and we had savings backing us up, which we had planned to spend on buying another hostel,” he said. “We may still have that opportunity at some point further down the line. For the moment we are counting our blessings; many of our competitors didn’t make it this far.”

Pol and his partners also owe a debt of gratitude to the Spanish government’s furlough program, which has paid out 70% of their workers’ wages and most of their social security costs for 14 straight months. The workers are still on furlough though Pol and his partners are now covering the limited hours they’ve been working since the hostel reopened.

Another lifeline was provided by the landlord, who in the fall agreed to a 50% reduction in rent for six months. When that period came to an end, he agreed to extend the conditions for another six months.

Hostal Live finally reopened its doors, albeit to only one of its two floors, in early March. At that time Spain’s economy was still in partial lockdown, non-essential travel between regions was prohibited and a 10 o’clock curfew was still in place. And there were virtually no tourists at all in Barcelona.

“The timing may seem strange,” says Pol. “But we wanted to make some big changes to the hostel before properly reopening to foreign visitors. Most importantly, we wanted to install and test out a contactless key system so that our guests could access reception, their rooms and other hotel areas with their phones. This would help to minimize contact between guests and members of staff for as long as this pandemic lasts.”

But to fill its rooms at a time of almost zero tourism, Hostal Live had to offer historically low prices. In March, that meant charging an average price of €30 room per night, less than half the average price for a normal month of March. But the plan worked: people came to fill the rooms, albeit not from as far and wide as usual.

“With the exception of a few French tourists, almost all of the guests were Spanish. During the week we catered to workers who had come to Barcelona for the day and suddenly found themselves in need of a bed for the night. At the weekend we tended to attract young couples, often from the suburbs surrounding Barcelona, who had pleasure rather than business on their minds. By the end of the month we had achieved an occupancy rate of 15%.”

That may seem pitifully low but it was better than nothing, especially considering that most hotels in Spain were not even open. In the first quarter of this year more than 70% of the country’s entire stock of hotels remained closed, according to a report by STR and Cushman & Wakefield. The average revenue per available room (RevPAR), a metric that is widely used in the hospitality industry to measure the operating performance of a lodging unit such as a hotel or motel, was down 65% compared to the same period of 2020.

Tourism’s share of GDP in Spain collapsed by more than half last year, to 5.5% from 12.4% in 2019, according to one study. That was after international tourist arrivals by air, land, and sea had collapsed by 77% from the prior year, to just 19 million foreign tourists. That trend has continued through the spring of 2021. In March, the latest data available, the number of foreign tourist arrivals was still only 490,000, the lowest level for any March since at least 1995. It was the 13th consecutive monthly decline in tourist arrivals. 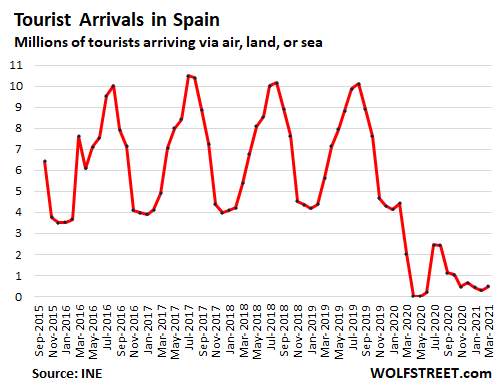 “It’s impossible to know how many of these shuttered hotels and hostel will reopen,” says Pol. “Many owners didn’t have such a large financial buffer when the crisis hit. The number of hotels for sale began rising sharply last summer before plateauing at the beginning of this year.”

In April this year, Hostal Live Barcelona opened its other floor to guests. By the end of the month the occupancy rate had tripled to 44%. French and Italian tourists began arriving in fits and starts. During the Easter break, all of the hostel’s rooms were occupied. So far in May the occupancy rate is 60%. And there’s still one week left to go.

That may be a far cry from the pre-pandemic reality, when the average monthly occupancy rate was 93%, but the trend is improving. Foreign tourists, mainly from France but also Italy, Germany, Austria and the Czech Republic, are now accounting for roughly half of all the guests. And Pol and his partners have been able to gradually increase prices, though they are still a fraction of what they would normally be.

Europe’s tourism industry is finally open for business. EU countries officially agreed last week to welcome foreign travelers who have received one of the coronavirus vaccines approved by European regulators, which are currently four: Pfizer-BioNTech’s, Moderna’s, AstraZeneca’s and Johnson & Johnson’s. Vaccinated people will be allowed to enter the bloc, if they’ve received the last recommended dose at least 14 days before their arrival in the EU.

The British government’s decision to leave Spain — and a host of other EU countries including France, Italy and Greece — off its coronavirus “green list” has sparked concern. The move means that British travelers returning from Spain must continue to provide a negative test on arrival, quarantine for 10 days and take two Covid-19 tests at home. The UK government’s advice against traveling for tourism or leisure to countries on its amber list, such as Spain, could also invalidate travel insurance.

This could end up deterring many UK tourists — a key market segment — from visiting Spain. In 2019, Spain received more than 18 million tourists from the UK — just under a quarter of the total.

Business travel is also deep in the doldrums. The Mobile World Congress, the world’s biggest mobile trade fair, used to take place every year in Barcelona. Last year it was cancelled. This year, it’s scheduled to take place in late June, but it has lost so many key exhibitors in recent weeks, including Samsung, Lenovo, Ericsson, Sony, Google, IBM, Nokia, Qualcomm and Oracle, that it’s now being dubbed the “zombie show”. But the event’s organizer, the GMSA, insists that the show must go on even as more and more participants pull out.

The trade show — normally with 110,000 attendees — is of vital importance to Barcelona’s tourism industry. Before the virus crisis, it used to generate around half a billion euros each year, much of which ended up in the pockets of hoteliers.

“Even if it goes ahead with just a fraction of the normal number of attendees, it might give a chance for the city and its businesses to begin to get back on their feet,” Pol says. By Nick Corbishley, for WOLF STREET.