Long-term US Treasury yields have continued to march higher despite the Fed’s purchases of about $120 billion a month in Treasury securities and MBS, whose purpose it is to push down long-term rates. And the Fed governors continue to voice unanimous support for those higher yields as a sign of a growing economy and rising inflation expectations. Just about every day, they come out shrugging and expressing their support for those higher yields. On Friday, it was Richmond Fed President Thomas Barkin’s job to spread the gospel.

This comes on top of Jerome Powell’s insistence earlier in the week that the Fed will consider the rise in inflation as temporary, and that the Fed won’t do anything about it, and that the resulting rise in long-term yields, as long as it doesn’t create “disorderly conditions” in markets, are a welcome sign of economic growth and rising inflation expectations. This Fed is looking forward to a surge in inflation, and is promoting it, and so on Friday, the 10-year yield closed at 1.74%, the highest since January 2020: 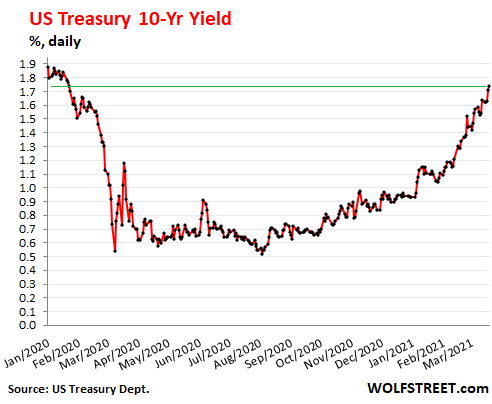 The 30-year yield closed at 2.45% on Friday, the highest since July 2019. When yields rise, bond prices fall. The price of the iShares 20 Plus Year Treasury Bond ETF [TLT], which tracks Treasury securities with maturities of 20 years or more, has dropped 21.5% since August 4.

Mortgage rates have belatedly started to follow, and with a vengeance, after hitting their low point late last year. On Friday, according to the Daily Rate Survey by Mortgage News Daily, the average 30-year fixed-rate mortgage rate reached 3.45%, up 70 basis points from the low at the end of December (2.75%).

These mortgage rates are still very low by historical standards, but they’re a lot higher than they were three months ago.

Mortgage refis have dropped since January, driven by a sharp drop in no-cash-out refis; cash-out refis have also dropped, but less so, for a reason we’ll get to in a moment. This chart shows the Mortgage Bankers Association’s mortgage refi index: 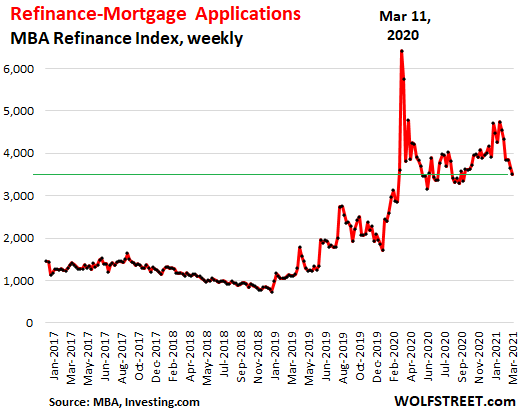 No-cash out refis “are already seeing large volume declines,” according to a report by the AEI Housing Center, which pointed out that due to the higher rates, fewer loans are “in the money.”

Cash-out refis are also down but only modestly, “as these borrowers are driven more by cash needs than rates,” the AEI report said.

The chart by the AEI Housing Center shows the weekly no-cash-out refis in 2021 (light-blue line, left scale) heading south, and in 2020 (brown line); it also shows the median mortgage rate in 2021 (dark blue line). The time line indicates the weeks of the year: 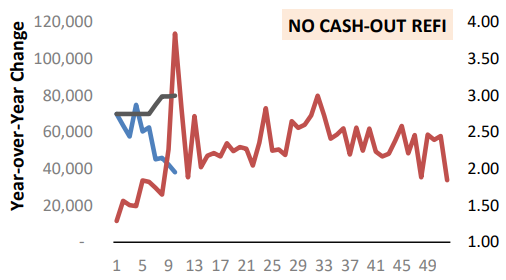 The AEI’s weekly Home Price Appreciation index, while still up a massive 14% year-over-year, has started to back off tad: at one point in early February, it was up over 17% year-over-year. 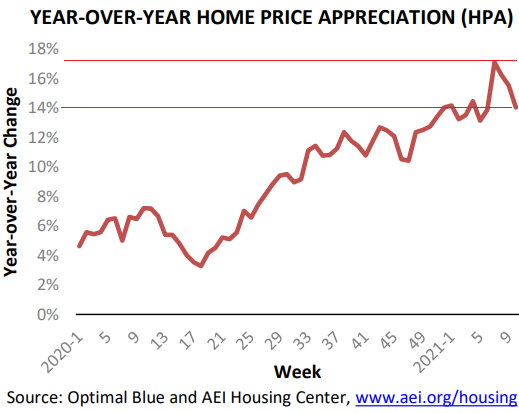 The “decreased buying power” due to the rising interest rates is “already having a limited effect in slowing HPA,” The AEI said. “The somewhat lower HPA in week 10 of 2021 looks to be the first sign of this trend.”

But the AEI added that “a loan rate of 4% might, due to severe supply constraints, still result in an unsustainable HPA rate of 8%-11%.”

Mortgage applications for the purchase of a home have also declined from the peak in mid-January: 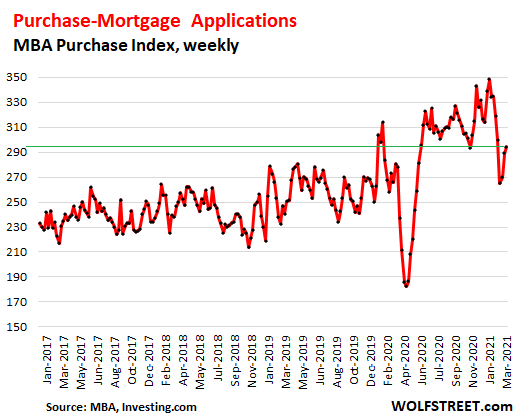 So it seems from this weekly data that the housing market remains red-hot, but the higher mortgage rates, which remain ultra-low by historical measures, have already started dialing down the heat.