Now hoping for “corrective action” and “credit intervention” by the State of Texas.

The financial repercussions of the winter-storm electricity crisis in Texas have entered the confession phase.

Just Energy Group, the Canada-based retailer of electricity and natural gas that is heavily involved in Texas, announced this morning in an SEC filing that it might have lost $250 million over the few days during the “Weather Event” in Texas, and that “the financial impact could change as additional information becomes available,” and that “once known,” the financial impact “could be materially adverse to the Company’s liquidity and its ability to continue as a going concern.”

In terms of its “liquidity”: The $250 million loss over the past few days contrasts with just $78 million in cash on hand that the company reported in its most recent earnings report for the quarter ended September 30. It also had $780 million in long-term debt, a third of which comes due this year. And its balance sheet has been hollowed out to where its stockholder equity is negative (-$500 million). 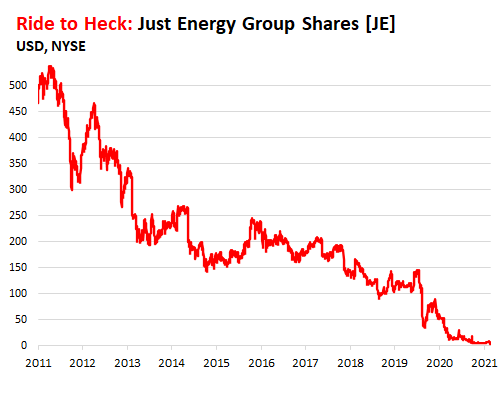 So the company stumbled into this crisis with a hollowed out balance sheet, money-losing operations, and a crushed stock. So, as it warned today, it may not be able to absorb the losses.

“The Company is in discussions with its key stakeholders regarding the impact of the Weather Event,” it said. These stakeholders include the various companies that Just Energy bought the electricity from. It now needs to pay them – at prices that had spiked toward the big Texas sky.

And it added: “The financial impact of the Weather Event is not currently known due to challenges the Company is experiencing in obtaining accurate information regarding customers’ usage from the applicable utilities.”

“However, unless there is corrective action by the Texas government” – a Texas-sized bailout? – “because of, among other things, the sustained high prices from February 13, 2021 through February 19, 2021, during which real time market prices were artificially set at USD $9,000/MWh for much of the week, it is likely that the Weather Event has resulted in a substantial negative financial impact to the Company,” it said.

This is precisely the scenario on an individual-company basis that energy analysis and consulting firm Energy GPS had warned about over a week ago for the industry more broadly – that companies with “thin balance sheets” caught up in the fiasco could become part of a “cascade” of defaults.

“The financial carnage from this event will be significant – likely the biggest we’ve seen since the Western energy crisis both in terms of the number of entities under financial duress and the total dollars at stake,” Energy GPS said in its note to clients.

The Western energy crisis is of course what gripped California in 2000-2001 and led to the bankruptcy of PG&E and to a gubernatorial recall election, as a result of which incumbent Democratic Governor Gray Davis was ousted by Republican Arnold Schwarzenegger. Alas, in Texas, the governor cannot be recalled.

Energy GPS listed the “duration of the high prices,” along with “the market structure with fully de-regulated wholesale and retail access,” and “imperfect hedges” by power generation projects that “leave a mismatch between hedge volumes and physical capabilities,” and of “the thin balance sheets of a significant number of generators and retail electric providers” – such as Just Energy.

“These thin balance sheets may not have enough cash to weather this storm which may cause non-performance which may cascade throughout the market,” Energy GPS said.

That’s what the “stakeholders” of Just Energy are now worried about. They’re wondering if they’re going to get paid. And if they don’t get paid, those with “thin balance sheets” may not be able to pay their own stakeholders.

The dizzying spike in the electricity prices over the duration of several days made some companies enormous amounts of money, but it ripped into other companies – and even some consumers, such as the 29,000 customers of Griddy that were exposed to wholesale electricity prices – and therefore these price spikes.

And those companies with “thin balance sheets” might not be able to withstand it, and impacted consumers might default on their bills (that for some amount to thousands of dollars). And that concern of non-performance is now cascading through the system.

If this spirals out of control, Energy GPS said, “State credit intervention may be required” – which Just Energy this morning alluded to with its hopes for “corrective action by the Texas government.”

What ERCOT planners got colossally wrong was the availability of their fossil fleet: Gas and coal plants failed. Even a nuclear reactor tripped offline. Read… Who’s to Blame for the Texas Power Crisis?

140 comments for “It Starts: The Cascading Financial Repercussions of the Texas Electricity Crisis”