One more manifestation of the inflation pressures working through various levels of the economy despite suboptimal demand.

January, in terms of freight volume, is usually a slow month of the year, after the shipping season before the holidays, and freight rates tend to back off. But not this January.

The amount that shippers, such as retailers and manufacturers, spent in January on shipping goods to their customers soared by 19.5% compared to January last year, the steepest year-over-year increase since 2011, and surpassing the surge in September 2018, according to the Cass Freight Index of Expenditures. This was driven by a mix of increasing freight volume and soaring freight rates: 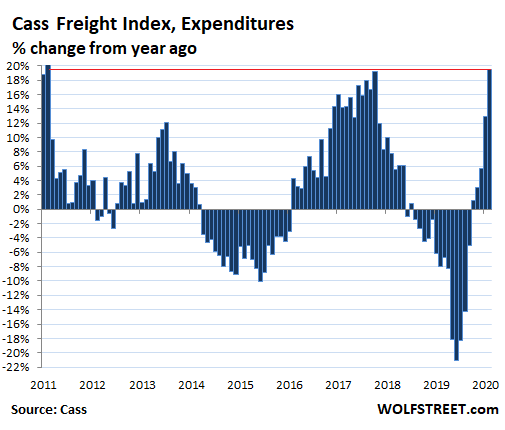 The higher freight rates in January include trucking spot rates and contract rates. According to DAT Freight & Analysis, the average national contract rate for van-type trailers in January jumped by 26% from a year ago to $2.40 a mile.

Spot rates declined over the course of January from high levels in December before picking up again in February. But the average rate in January, at $2.36 was still up 11% from a year earlier.

The freight rates embedded in the Cass Freight Index jumped by 10.1% year-over-year in January, up from an increase of 6.0% in December.

The Cass Freight Index covers all modes of transportation, but truckload represents over half of the dollar amounts, followed by rail, less-than-truckload (LTL), parcel services, etc. It does not cover bulk commodities.

With this 19.5% year-over-year surge in January, the Expenditures index hit the highest January ever by a wide margin, blowing by the prior record of January 2019 by 10%. It was roughly flat with the all-time overall record set last December, when normally there is a seasonal drop from December to January, including -5.7% in January 2020 and -3.8% in January 2019. 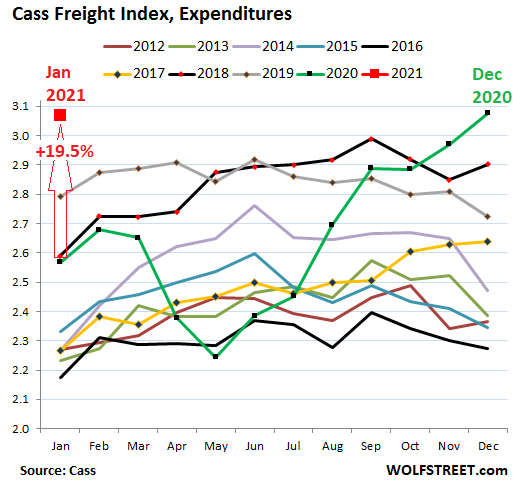 Shipment volume in January jumped 8.6% year-over-year, but January 2020 had been weak and was still part of the two-year freight recession. 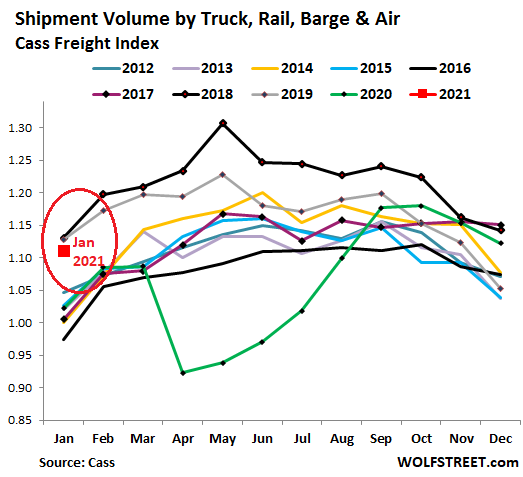 Now there’s another factor goosing freight costs. Diesel retail prices started to rise late last year. In the week through February 15, the national average retail price for No. 2 diesel rose to $2.88 per gallon, according to the EIA, up 20% from November 2020.

The diesel price has been sticky, as they say. Crude oil, in terms of WTI, has jumped 64% over the same period – despite a terrible demand scenario – and is back where it had been in January 2020. For diesel to return to the January 2020 price, it would have to rise to $3.06 per gallon. Higher fuel prices will put further upward pressure on freight expenditures. 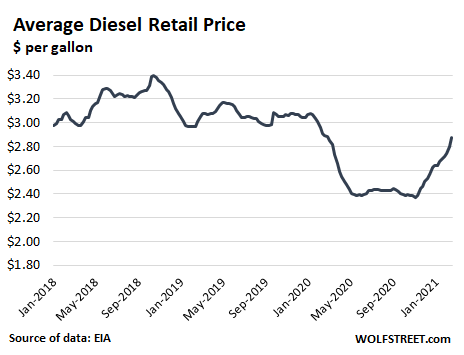 There were already some truck capacity constraints in January due to weather conditions, which is obviously not unusual for January. But in mid-February, a massive winter storm started wreaking havoc across a large part of the US, triggering further capacity constraints in trucking.  The effects on transportation and freight rates will become clearer over the next few weeks.

So demand for transportation, while relatively strong, given the Pandemic-related shift from spending on services to spending on goods, has remained below 2019 and 2018 levels. Yet freight rates are surging at a blistering pace. This is one more manifestation of the inflation pressures now working through various levels of the economy despite suboptimal demand.

If folks say they see no inflation, they should look at industry reports now bragging about steep price increases. And consumers are willing to pay those prices – the sign of a sea change. Read… AutoNation Brags About Huge Jump in Per-Vehicle Gross Profit on Soaring Prices Despite Declining New-Vehicle Unit Sales

75 comments for “Shipping Costs, Trucking Rates Soar Despite Demand Below Prior Years. Now Add Diesel Price Surge to the Mix”