Down 11 million jobs from pre-Pandemic trend. Like the overall economy, the job market has split in two.

In January, there were 142.6 million jobs at establishments – at companies, non-profits, and government entities, not including many gig workers – a level first seen in October 2015, according the Bureau of Labor Statistics this morning. This was up by 49,000 from December.  But in December, the number of jobs had dropped by 227,000. Over the three months since November, establishments shed 178,000 jobs. Over the four months since October, establishments created only 86,000 jobs (green line in the chart below).

Households reported that 150.0 million people were working – including gig workers – a level first seen in April 2015, according to the household survey data also released by the BLS this morning (red line). This was up by 201,000 from December. Over the past four months, households reported an increase of only 362,000 jobs. 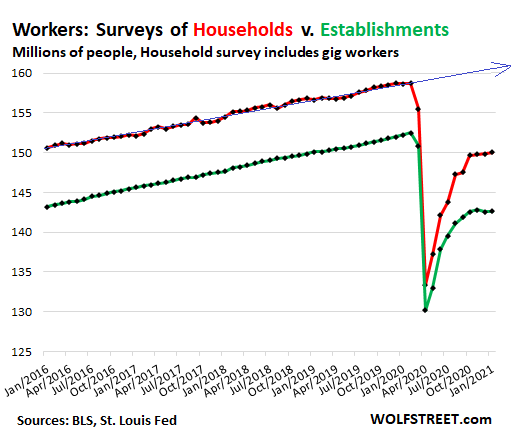 Compared to January last year, the end of the Good Times, establishments shed 9.6 million jobs. Households reported having lost 9.9 million jobs. Compared to the pre-Pandemic trend (blue line in the chart above), jobs as reported by households would be down by 11 million.

The number of people who are deemed by survey takers to be in the “labor force” – either working or not working but deemed to be actively looking for a job, depending on how they answer specific questions on the survey – dropped by 406,000 in January, to 160.16 million people, the lowest since September and roughly back where it had been in July: 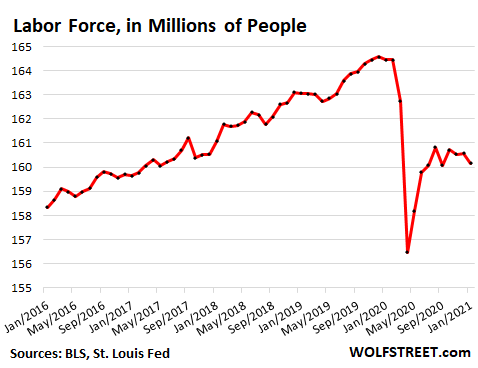 However, the employment-to-population ratio, which is far broader and covers the working-age population (16 years or older), at 57.5% has barely budged over the past four months: 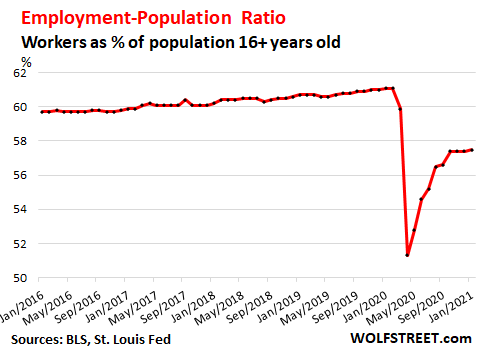 And for your amusement, here is the long-term view of the employment population ratio, which plunges during each recession. Until 2000, the ratio more than recovered each time. But in every recession since 2000 – three of them so far – it has never fully recovered before the next crisis hit. These are the infamous “jobless recoveries” of the modern era, when during each recession, companies vow to bring their costs down, and work is sent overseas: 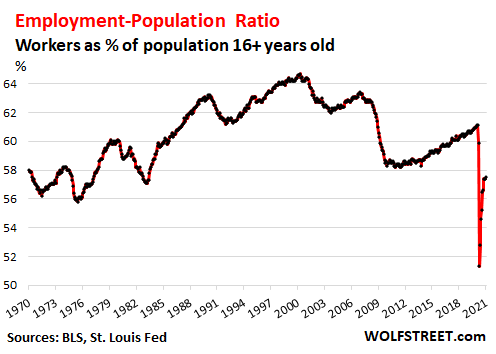 Like the overall economy, the job market has split in two, with some sectors booming, and other sectors in a depression. Some of those shifts are temporary. But others are long-term and structural.

For example, while employment at restaurants will come back, employment at hotels, the entire travel industry and supporting sectors face a structural issue: Businesses have learned to hold meetings without getting on a plane. The corporate cost cutters are now on top of that, and the profit motive is driving it. There will always be business travel, but much of the travel done before has now been revealed as replaceable by virtual meetings.

The Pandemic has shaken corporate thinkers out of their rut, and consumers have changed too. Each major recession has a lasting impact on how the economy operates. But the Pandemic has triggered shifts in thinking that are far larger than in the prior two recessions.  Some of those changes will impact the employment situation for years to come.

When you look at the long-term chart of the employment population ratio above, you can extrapolate how the jobs recovery following this recession might pan out, compared to the past two recessions, having quickly bounced back part of the way, and then having stalled. Going forward, it will be going through the typical painfully slow upward grind, but off a lower level than before.